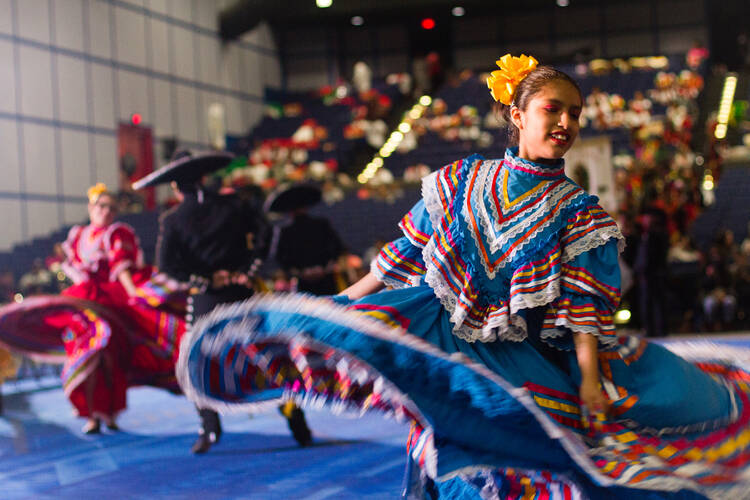 Mexican, Puerto Rican, Honduran, Dominican, Chilean, Salvadorean, Cuban, Colombian…. Latinos from across the American continents have made the United States their home. The gift of Hispanics to the Catholic Church here, and to the larger society, takes a lot longer than a month to celebrate.

Still, as Maria Muñoz-Visoso, executive director for U.S bishops’ Secretariat for Cultural Diversity in the Church, points out, Hispanic influence in the United States began well before those events. Hispanics are among the nation’s founders in places like Florida, California, New Mexico and Colorado.

“It is good to rediscover our history and welcome the diversity of the people in the United States,” Ms. Muñoz-Visoso says. “[Hispanics] have made a lot of contributions, so it’s important to remember what those contributions have been.”

“It is good to rediscover our history and welcome the diversity of the people in the United States.”

Churches are one measure. The Cathedral Basilica of St. Augustine, for example, marked the first Catholic parish in what is now the United States, after Don Pedro Menéndez de Aviles founded the Florida city in 1565. (The current structure was built in the 18th century.) And San Miguel Mission is the oldest church in the United States, having been erected in 1610 in Santa Fe, now part of New Mexico.

“We tend to look at [U.S.] history from East to West, and I think that we forget to look at it South to North, or West to East,” Ms. Muñoz-Visoso says. “I think we need to have a more complete sense of our history.”

Beyond the brick and mortar, she points out, Latinos have brought a communitarian dimension, one rich in volunteerism, to the Catholic faith in the United States. “We need the faith of the people, their leadership at the ground level, their popular religiosity, which is contagious, and their sanctification of the day-to-day,” Ms. Muñoz-Visoso says. “The faith is not just something that is in my mind, but in everything I do.”

Santiago Moratto, a scholar at the Arizona State University Hispanic Research Center, also notes that Latinos tend to be more community-oriented. This is in contrast to the more prevalent individualism in the United States, which he describes as a desire to be “self-sufficient.” Mr. Moratto, who is from Colombia and married to a woman from Mexico, acknowledges differences between Latino cultures but says, “Bottom line, we have the appreciation for family values. That’s one of the things that keeps [Hispanics] together.”

These values, along with a zeal for the arts, math and sciences, make him hopeful for future generations. Mr. Moratto hopes that tomorrow’s Latinos will take their place among the nation’s leaders.

Ms. Muñoz-Visoso also emphasizes the potential for leadership among Latino Catholics, noting that a majority of U.S. Catholics under 30 are of Hispanic origin. “The church needs to understand and harness the power of that youth,” she says. “If the church wants to strive, it has to make an effort to reach out to them and to accompany them and offer mentoring, so they can respond and become leaders.”

Study after study confirm that Latinos continue to increase as a percentage of the U.S. population. But while Hispanic Heritage Month recognizes this change, Ernesto Vega, coordinator for adult faith formation in Spanish for the Archdiocese of Los Angeles, has some objections.

“I don’t totally agree with the name,” he says. “In one sense, I am glad that the United States is moving into the recognition of this important group. However, as we’re moving in that direction, we’re not yet recognizing other groups. We’re just recognizing how the Hispanics from Europe came to give a contribution of the world.”

Mr. Vega prefers the term “mestizaje”—which reflects a mixture of cultures—to refer to the Latino community. “We have to eventually move to a deeper consciousness,” he says. “This heritage is not only Hispanic, but indigenous and African and Middle Eastern. Hispanic or Latino is really the mixture of these different groups.”

He points to Latin American food as an example. Rice came from Spain and beef came from other European nations, but the beans and the corn are from the American continent. Likewise, Latin American music has African drums and flutes from the East, all the while maintaining indigenous undertones.

“In order for us to really grow, we need to embrace our Native American heritage,” Mr. Vega says of society in the United States. “Otherwise, we will destroy ourselves. The indigenous people did not separate the spiritual and religious life from their life in society.”

He says the United States is moving toward a more “inclusive mentality,” though he does acknowledge contrary voices, like white supremacists. He says that other forces, like individualism, consumerism and materialism, also conflict with Latino culture culture.

“Each culture is valuable and it’s important for us as a country to acknowledge them,” Mr. Vega says. “Especially in this nation where you have ethnicities and cultures from all over the world, we should recognize as much as possible the different groups.”

“Hispanics are among the nation’s founders in places like Florida, California, New Mexico and Colorado.”

People must hear about this history otherwise some will only hear from those who say the country is being taken over by illegal immigrants.

The Latino immigrants of the last decades of the 20th century and the past two decades of this one, have made it acceptable for the first time in US history for American immigrants to speak a language other then English. Not only to speak it but to take pride in speaking another language. They have educated the rest of America by example .Prior immigrants out of shame or for just wanting to fully assimilate, made a point to not speak their language of origin. Recent Latino immigrants do not buy into such paranoia, stupidity, ignorance, jingoism; whatever you want to call this . There was a time that we were provincial and narrow minded; "this is America, speak English" was heard among all classes and earlier immigrants. We the culture at large owe them that; Latinos by proclaiming the right to speak their language, IN PUBLIC SPACES made diversity, including of language, a political issue and now diversity is something we now as a nation, profess to champion. Descendent of Italian immigrants for example , whose immigrant ancestors refused to speak Italian, are now studying it in school out of desire to learn.