Is Pope Francis prepping for doomsday in the church? I hope so. 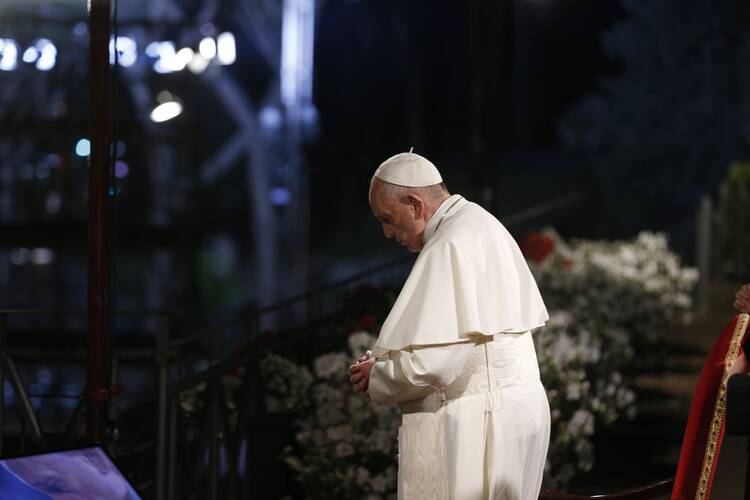 If you’re not a Vaticanista, the announcement of the proposed reform of the Roman Curia on March 17 might have seemed like some pretty standard Catholic gobbledygook. What is the Roman Curia? And why should I care about dicasteries? Does this mean I get to go back to eating meat on Fridays? If not, why are we talking about it?

But in the midst of the release of the reform document (which was actually a big deal for many reasons), Vatican experts recognized something that actually could change things for you and me in a potentially massive way. As one theological expert who worked on the constitution put it, the Vatican seems to be saying that the “power of governance in the church does not come from the sacrament of [Holy] Orders” but from one’s mission in the church. That is, being in positions of leadership in the church should not require a collar, ordination or being a man.

If that interpretation proves accurate to the Vatican’s intent, it would mean not only that most of the departments in the dusty but incredibly well-decorated halls of Rome can be run by women and men who aren’t priests, but that our local parishes and dioceses could. Your sister could potentially be put in charge of the parish where I say Mass; my aunt Kathleen or Uncle Stan could even end up running the diocese someday! (And they would be awesome.)

Let’s remember that almost all of our Catholic schools are run by incredibly talented women and men who are not priests, and have been so in most cases for decades.

If this sounds hard to believe, let’s remember that almost all of our Catholic schools are run by incredibly talented women and men who are not priests, and have been so in most cases for decades. The same is true of our Catholic social service agencies, homeless shelters and pretty much every other Catholic institution. Even some parishes are already run by “lay administrators” who effectively serve as pastors.

So it’s an expansion of a pre-existing idea, but at a much more radical scale. Basically, it’s like the moment that the internet actually became a thing, but for ecclesial authority—a change that could expand access to leadership so radically as to transform our church entirely.

Welcome to the future! It’s all finally happening!

Or so I thought, until some diocesan priest friends rolled their eyes so hard at my enthusiasm that I thought they were going to fall over. “You really think church leaders are about to hand over any of their authority?” one asked me. “What channel are you watching?”

“Well, it’s not like they’re going to have a choice, is it?” I wondered. The fact is, there just aren’t that many priests to go around these days.

“Yes, and how is leadership responding?” another asked. “Are they expanding the pool of who is eligible to be ordained, finally opening the doors to women or married people? No. They’re closing and combining parishes, putting that much more work on us. Meanwhile, to try to increase numbers they’re also opening the seminaries to more reactionary men who end up causing trouble.”

And in Rome, even as Pope Francis has appointed more women to positions of leadership in the Vatican than ever before, America’s Colleen Dulle points out that only one dicastery (department) currently has a non-cleric in charge, and Francis himself had to fight hard just to enable the appointment of a woman in that group’s No. 2 role. Meanwhile the head of the Vatican’s magazine for women resigned after she wasn’t allowed to report on women religious in Rome who have been sexually assaulted by the bishops and cardinals for whom they worked.

We’re already in a situation where there aren’t enough priests, and we are seeing the impact of that on everything from pastoral care to the morale of priests themselves.

Maybe this new reform document isn’t like the revolution of the internet after all. Maybe it’s like electric cars, which, believe it or not, were first introduced around 1900. Porsche had one; Thomas Edison spoke of their superiority; there were even charging stations—but they were quickly cast aside in favor of the combustion-engine Model T. It doesn’t matter if an invention or innovation offers a massive improvement if no one will adopt it.

Pope Francis no doubt knows that there’s a significant portion of church leadership that will simply dismiss this idea, even though their parishes and dioceses actually need it. He’s had nine years of seeing them do it.

I also can’t believe he and his advisors don’t see the writing on the wall. In many places, the priesthood’s numbers are in freefall. Almost half the United States’ 37,000 priests are over 70; the other half would add up to just over one priest per parish throughout the country, except that figure includes over 11,000 ordained religious, most of whom do not work full-time in parishes. So basically we’re already in a situation where there aren’t enough priests, and we are seeing the impact of that on everything from pastoral care—trying to find a priest who can come and anoint your loved one can be nearly impossible at times, even in big cities—to the morale of priests themselves. As Ms. Dulle reported last week in discussing the reform announcement, the worldwide priest-to-parishioner ratio as of 2019 was, similarly, one priest for every 3,245 Catholics.

This is simply not tenable. We are well beyond the tipping point when it comes not only to priests providing pastoral leadership but the sacraments themselves. The institution as we currently experience it is simply not going to be able to survive, and yet much of our leadership seems content to blame the messenger and insist on business as usual rather than confront that reality. So what to do?

Here’s a thought: What if Francis has spent the last nine years building an ark? He has used his pontificate to call out clericalism, empowered groups within the church that have been ignored and drawn the eyes of the faithful back to the needs of the poor and marginalized, where he believes our mission belongs. We read these actions as a corrective for the present, but maybe they have been just as much about creating a vehicle for the church to have a future. Certainly, what he has laid out in this newest document offers exactly the kind of non-clerical basis for authority that the church of the future is going to need to survive.

Some church leaders may scoff at the pope, drag their feet and wink at one another while they tell themselves they’re going to wait his pontificate out. But maybe it’s Francis who has been doing the real waiting all along, ensuring the viability of the church to come while the waters keep rising at our feet.