With Pope Francis’ reform of the Roman Curia, nine years of work is coming to fruition 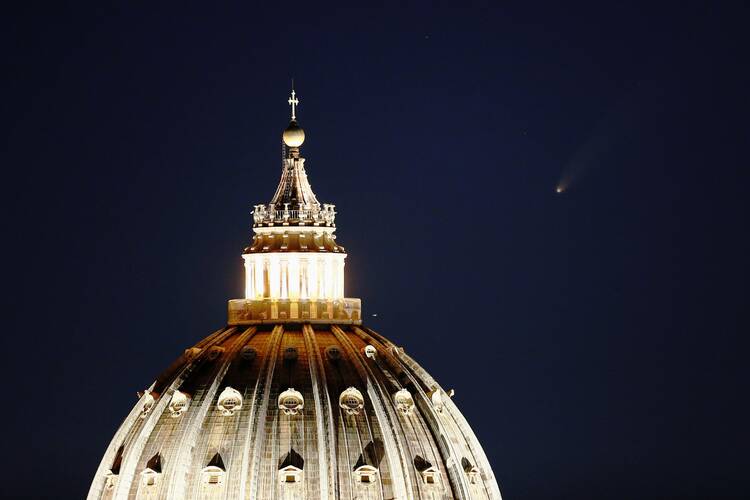 The dome of St. Peter's Basilica in is seen at the Vatican in this 2020 file photo. On March 19, 2022, Pope Francis promulgated the long-awaited constitution reorganizing the Roman Curia. (CNS photo/Guglielmo Mangiapane, Reuters)

Pope Francis’ long awaited Constitution for the Reform of the Roman Curia—“Praedicate Evangelium” (“Preach the Gospel”)—was released by the Vatican today. It offers a strong missionary direction for the Roman Curia and introduces significant changes from the constitution promulgated by John Paul II—“Pastor Bonus” (The Good Shepherd)—in June 1988, which it will replace when it comes into force on June 5.

It puts the preaching of the Gospel and the missionary nature of the church as the top priority of the Roman Curia. Significantly, it allows for “the involvement of lay men and women also in the role of government and responsibility in the church” and it assigns the safeguarding and protection of minors a central place in the curia’s structure. It emphasizes the importance of synodality for the life of the church in the 21st century and it promotes decentralization in church governance, in part by strongly affirming the important role of national and continental bishops’ conferences.

The Vatican surprised everyone, including officials in the Roman Curia, when it released the 54-page constitution “Praedicate Evangelium” on March 19, the feast of St. Joseph, as Francis began the 10th year of his pontificate. At present, the text is only available in Italian, but translations in English and other languages are expected to come soon. One source suggested to America that it was released today to prevent it being leaked in advance of the official presentation on Monday.

“Praedicate Evangelium” allows for greater involvement of lay men and women in church governance and assigns the protection of minors a central place in the Curia’s structure.

The reform of the Roman Curia was requested by the cardinals in the pre-conclave meetings in March 2013, and Francis began work on this enormous task immediately after taking office. As he notes in the preamble to the constitution, it is only the fifth time in 500 years that such a task has been undertaken. Sixtus V reformed the curia in 1588, Pius X did so in 1908, Paul VI reformed it after the Second Vatican Council in 1967, and John Paul II introduced the last reform in 1988.

Francis presented his reform as being in continuity with those last two. But while there is continuity there are also significant differences not only in the change of names and the number of Roman Curia offices, but also in the emphasis on “the missionary conversion” of the church and the curia and on synodality.

The constitution states that the Roman Curia “is the institution which the Roman Pontiff ordinarily makes use of in the exercise of his supreme pastoral office and his universal mission in the world.” It emphasizes that “the Roman Curia is not placed between the pope and the bishops, rather it is at the service of both according to the modalities that are proper to each.”

Furthermore, Francis, in the constitution, affirms the role of national and continental bishops conferences and the patriarchates by emphasizing their potential to serve the bishops, without making them an obstacle to the relationship of the pope with the individual bishop. It explains that the aim is “to express the collegial dimension of the episcopal ministry and, indirectly, to strengthen ecclesial communion.”

Whereas in the past 500 years the Congregation for the Doctrine of the Faith was the number one ranking dicastery in the Roman Curia, under Francis’ reform it is relegated to second place.

By the time Francis became pope the Roman Curia was composed of two sections of the Secretariat of State, nine congregations, 12 pontifical councils, three tribunals as well as a few other offices.

Francis has not only made structural changes, through incorporating several offices into one (as with the Dicastery for the Service of Integral Human Development, and the Dicastery for Communication), he has also established a third section of the Secretariat of State to care for the diplomatic personnel of the Holy See, in addition to the existing two: for the General Affairs of the Church, and for Relations with States. He also refers to the Secretariat of State as “the papal secretariat,” reviving an earlier title.

He not only changed the nomenclature by replacing the terms “congregation” and “council” with the word “dicastery,” he also reduced the number of these offices. Under the new constitution there are 16 dicasteries, seemingly with equal juridical status.

“Praedicate Evangelium” puts the preaching of the Gospel and the missionary nature of the church as the top priority of the Roman Curia.

Whereas in the past 500 years the Congregation for the Doctrine of the Faith (though under different names) was the number one ranking dicastery in the Roman Curia (because the pope was its head until 1967), under Francis’ reform it is relegated to second place. The first in ranking is “The Dicastery for Evangelization” to emphasize the missionary nature of the Roman Curia and the church. Significantly, the pope becomes the head of this dicastery, which now has two sections: one for the fundamental questions of evangelization in the world, the other for the first evangelization, and each will have a pro-prefect.

The Dicastery for the Doctrine of the Faith, also has two sections with a secretary for each section and a prefect to oversee them. Significantly, the new constitution places the Pontifical Commission for the Protection of Minors within this dicastery. Commenting on this, Cardinal Sean O’Malley told Catholic News Service, “For the first time, Pope Francis has made safeguarding and the protection of minors a fundamental part of the structure of the church’s central government.” This represents, he said, “a significant move forward in upgrading the place and mandate of the commission, which can only lead to a stronger culture of safeguarding throughout the curia and the entire church.”

Throughout his pontificate, Francis has given a central place to the poor in the life of the church, and, in his reform, he reaffirmed this by upgrading the office of papal almoner to that of “The Dicastery for the Service of Charity” and ranked it number 3. With these three significant changes he has imposed his own personal imprint on the Roman Curia, something that Cardinal Oswald Gracias told me, in an interview last December, was something that Francis very much wanted to do.

Throughout his pontificate, Francis has given a central place to the poor in the life of the church, and, in his reform, he reaffirmed this.

Another major concern of the cardinals in their pre-conclave meetings was the need to reform Vatican finances. The new constitution incorporates all the significant reforms that have been made with the establishment of a council for the economy and the Secretariat of the Economy. It underlines that the Secretariat for the Economy carries out the function of the Papal Secretariat for economic and financial matters. It exercises control and supervision in administrative, economic and financial matters over the various dicasteries, offices and institutions connected with the Holy See and “it exercises a special control over the Pence of St. Peter and over the other papal funds.” It describes the role of the auditor general and of the administration of the patrimony of the Apostolic See.

The new constitution lists a new dicastery that has yet to be established, “The Dicastery for Culture and for Education.” It comes about through the incorporation of the Pontifical Council for Culture with the Congregation for Catholic Education. Like the dicasteries for evangelization and for the doctrine of the faith, this new dicastery will also have two sections: one for culture (which is very broad) and one for education, each with a secretary as its head, under a prefect for the whole dicastery.

Francis has devoted much of his pontificate to working for the unity of Christians and for dialogue with other religions, and it is therefore interesting to note that he has designated the two former “councils” for the Promotion of Christian Unity and for interreligious dialogue as separate “dicasteries” and upgraded their heads from ‘presidents’ to “prefects.”

Furthermore, whereas under John Paul II’s constitution “Pastor Bonus” a dicastery was to be headed by a cardinal or archbishop, Francis appears to open the possibility for lay people to hold senior positions by envisaging “the involvement of lay women and men, also in the role of government and responsibility.”

In the new constitution, Francis emphasizes the importance of the international recruitment of clergy, religious and laity to work in the Roman Curia, “as an expression of Catholicity.” It says, “those who serve in the curia are to be chosen from among bishops, priests, deacons, members of the Institutes of Consecrated Life and Societies of Apostolic Life and lay people who are distinguished by spiritual life, good pastoral experience, sobriety of life, love for the poor, a spirit of communion and service, competence in the matters entrusted to them, ability to discern the signs of the times.” For this reason, it emphasizes the need “to devote careful attention to the selection and training of personnel” and insists that recruitment be for a five-year term, which could be renewed once. It restates the retirement age (75) and says all positions are to be abandoned at the age of 80.

The constitution emphasizes the need for good coordination and communication within the Roman Curia, and for intra-dicasterial and inter-dicasterial meetings on a regular basis, as well as the promotion of communion among those working in the Vatican.

Francis, in the constitution, says the reform will be realized “if it blossoms from an interior reform, by which we make our own the paradigm of the spirituality of the Council, expressed by the ancient story of the Good Samaritan.” He emphasized that “the reform is not an end in itself, but a means to give a strong Christian witness, to foster a more effective evangelization, promote a greater ecumenical spirit, and encourage constructive dialogue among all.”