Dear Bishops: We need to talk about the crisis of despair in Catholic priests 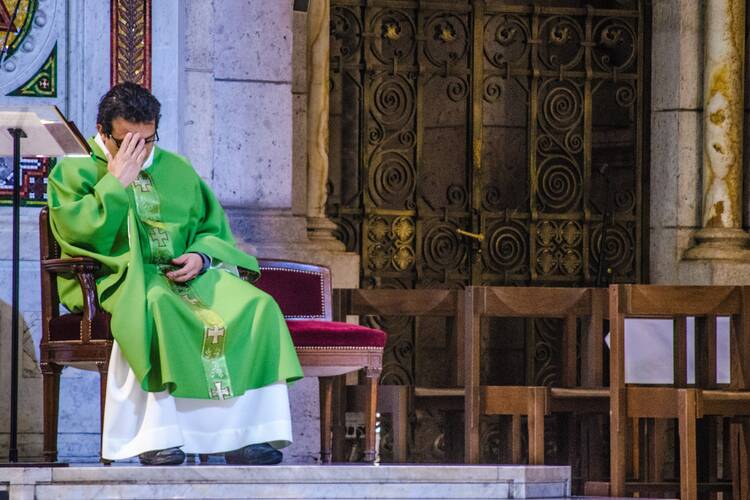 Photo by Nazim Coskun on Unsplash

The U.S. bishops are meeting this week in Washington. And amid all the stories about a document on the Eucharist and other matters that they will discuss, you would be forgiven if you didn’t catch word of the results of a survey of clergy released Nov. 2; it found that over half of U.S. priests are pessimistic about the state of the church. Fifty-one percent indicated the church is in “not so good” shape, and another 13 percent described it as “poor.” While the study also revealed a deepening rift between younger priests, who are more politically conservative and less supportive of Pope Francis, and their older counterparts, the two groups share a similar degree of pessimism.

That morale is down for priests across the country is not exactly stop-the-presses material. But I wonder if it isn’t the canary in the coal mine of the Catholic Church today—or perhaps more aptly, the polar bears trying to survive on ever-weakening sheets of ice. As of 2018,there were over 17,000 Catholic parishes in the United States and 37,300 priests to man them, of whom just under half were age 70 or above. Many of those over 70 are retired or part-time. And of the overall number, 11,600 are religious order priests, many of whom don’t serve full-time in parishes.

That morale is down for priests across the country is not exactly stop-the-presses material. But I wonder if it isn’t the canary in the coal mine of the Catholic Church today.

We are at or very near the moment when there is at best just one full-time priest for every parish in the United States. And at the same time, in many places these priests are operating without much support available from the broader institutional structures of the church. Twenty-six U.S. dioceses or archdioceses have thus far filed for bankruptcy as a result of abuse cases; four of them are among the top 25 largest dioceses in the country. And according to Catholic Extension, parishes across the country lost 40 to 60 percent of their weekly collection on average during the Covid-19 pandemic, and continue to be down 15 to 30 percent. Meanwhile, the 86 poorest dioceses in the United States have been down 50 to 90 percent.

The ongoing reality of abuse revelations in the U.S. offers other challenges for priests as well. In a recent survey of young Catholics, over 40 percent pointed to abuse cases and the church’s position on homosexuality as significant reasons for their lack of involvement in parish life. Only 13 percent say they attend Mass once a week, and of those one-third felt they would go less post-pandemic. Meanwhile, in a study commissioned by America earlier this year, 34 percent of Catholics said they were embarrassed to identify themselves as such because of the church’s handling of sex abuse. Only 37 percent of those who are weekly Mass-goers found Catholic priests “very trustworthy” in matters of faith and morals (though over half found their own parish priests to be so.)

I cannot speak for any other priest, but any time I introduce myself as a priest I personally expect to be distrusted. I think that response is completely understandable given the enormity of the sexual abuse crisis, but it is very wearying. Each time a new set of revelations comes out, as in 2018 in the wake of the news about Cardinal Theodore McCarrick’s abuse of children and seminarians and the Pennsylvania grand jury report, the personal impact deepens. What is this institution that we have given our lives to, priests may ask themselves, and to what extent are we ourselves complicit in the abuse and cover-up?

I cannot speak for any other priest, but any time I introduce myself as a priest I personally expect to be distrusted.

Meanwhile, it seems that since the 2020 presidential election many bishops have launched a personal crusade against President Joe Biden and, in some cases, Pope Francis. Certainly the question of who is eligible for the reception of Communion is significant. It speaks not only to the sanctity of human life and the place of the church in the world but the very meaning of the Eucharist. And disagreement on such questions need not be a cause for despair. Time and again over the course of his papacy, Pope Francis has insisted that an honest sharing of opinions and experiences is essential to the deeper communion that we all seek.

But where is the same energy for supporting the ever-smaller group of men those bishops rely on? How exactly do the leaders of the U.S. church expect it to function in 10 years with these diminishing numbers and their increasing burdens?

How exactly do the leaders of the U.S. church expect it to function in 10 years with these diminishing numbers and their increasing burdens?

While one might expect bishops to be trying to bridge the gaps between different groups of priests (and Catholics), some today seem intent on leading the charge for “their side.” This, too, increases the division and strain in the priesthood.

In the midst of these many burdens, there is no sense of change on the horizon. Pope Francis has set up a commission to consider female deacons, and one-third of U.S. bishops believe it’s a good idea. But the personnel issues of the U.S. church require much more immediate and dramatic solutions.

There are always many issues for the bishops to discuss. And I think many priests would insist there are far more important issues going on in our world and in our church to be considered. But at some point soon, if not already, we will reach a tipping point in terms of the U.S. church’s ability simply to provide the sacraments to Catholics.

Ironically, there is a sense in which that could be a good thing. It could force change. But it also means a lot of good men who have given their whole lives to the church will have fallen through the cracks.

Listen Next: Deep Dive: What you need to know about the Communion Wars in the U.S. Church