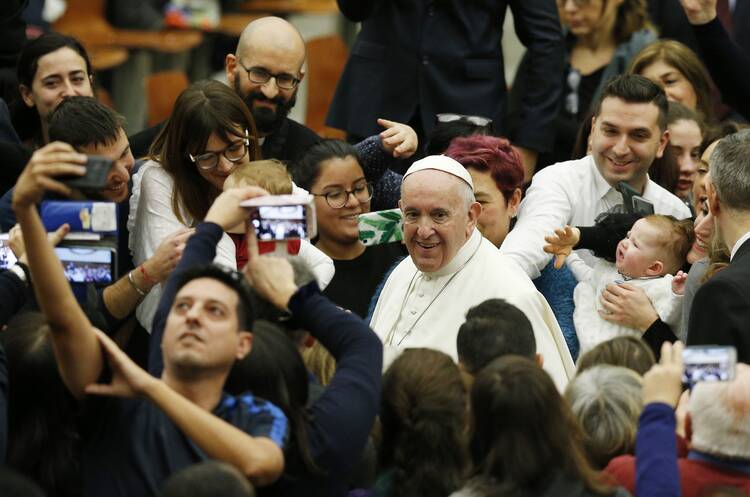 A man takes a selfie as Pope Francis leaves an audience to give Christmas greetings to Vatican employees and their family members in Paul VI hall at the Vatican in this Dec. 21, 2019 file photo. (CNS photo/Paul Haring)

Pope Francis’ long-awaited reform of the Roman Curia takes a head-on approach to the crises facing the church, using the Second Vatican Council as a road map for reclaiming the church’s credibility.

One could argue Francis was elected to carry out this reform, given that it was a main subject of the cardinals’ pre-election conversations in 2013. It is only the fifth such effort to remake the Curia in the last 500 years. The last three followed Vatican II, with efforts by Paul VI in 1967 and John Paul II in 1988 preceding Pope Francis’ reform. Since then, the church has lost credibility and hemorrhaged members in wealthy Western nations where its hold was once the strongest and is now experiencing a severe shortage of priests, leaving some Catholics without access to the sacraments for up to a year at a time.

One could argue Francis was elected to carry out this reform, given that it was a main subject of the cardinals’ pre-election conversations in 2013.

These grim statistics are nothing new: During John Paul II’s papacy, from 1978 to 2005, the Catholic Church experienced a 40 percent increase in population, but the total number of priests worldwide decreased slightly. Despite well-funded efforts to promote vocations, the world’s population of seminarians has continued to decline and the average age of priests has continued to increase. The priest-to-parishioner ratio has grown increasingly untenable, with one priest for every 3,245 Catholics worldwide as of 2019. Vocations to women’s religious orders have dropped even more steeply in that time.

While Benedict XVI’s response, particularly to the abuse crisis, was oriented toward purifying the church through an emphasis on doctrine, Pope Francis’ reform has shifted the church’s focus significantly: The new constitution officially recognizes the evangelization office—the Congregation for the Evangelization of Peoples—as the top office in the Vatican, displacing the Congregation for the Doctrine of the Faith. The latter, founded in 1542 as the Supreme Sacred Congregation of the Roman and Universal Inquisition, has long had the nickname of “La Suprema.”

The new constitution for the Roman Curia, “Praedicate Evangelium” (“Preach the Gospel”), which was finally released March 19 after nine years of work, recognizes that in the face of the crises of abuse, vocations and credibility, the way forward is not a “smaller but purer” church but rather a broad evangelization, the road map for which is Vatican II.

The new constitution for the Roman Curia recognizes that the way forward is not a “smaller but purer” church but rather a broad evangelization, the road map for which is Vatican II.

As the world’s priests are stretched thinner, lay people—in particular lay women—have stepped up to fill in the gaps. Since Vatican II, a robust movement of lay catechists has helped with forming the laity in Latin America; in some areas, lay people, including deacons and religious sisters, regularly lead Communion services (a service without consecrating the Eucharist) if the people do not have regular access to priests. Lay women are increasingly being appointed to roles formerly held by priests, working as parish administrators and chancellors of dioceses and even being named to high-ranking Vatican positions.

With his new constitution for the Roman Curia, Pope Francis has further ensured that the church in the third millennium will increasingly be led by lay people. The constitution specifically states that the Curia reform “must foresee the involvement of laymen and women, also in roles of governance and responsibility” (Sec. 1, Art. 10) and says “any member of the faithful may preside over a Department or Body, given their particular competence, power and governance or function” (Sec. 2, Art. 5). The Vatican has not clarified exactly which roles will be open to lay people, but analysts have so far interpreted this to mean that lay people can lead all but a few Vatican offices such as the Dicastery for Bishops and the Dicastery for Clergy. At a media briefing in the Vatican March 21, Gianfranco Ghirlanda, S.J., explained the changes, saying that the “power of governance in the church does not come from the sacrament of [Holy] Orders” but from one’s mission.

Gianfranco Ghirlanda, S.J.: The “power of governance in the church does not come from the sacrament of [Holy] Orders,” but from one’s mission.

This is a huge step for an institution that has for centuries relegated governance and administration to the ordained and only gradually opened both to lay people as they have to be as well-educated, if not better-educated, than clerics, particularly in matters of finance and leadership. The Curial constitution emphasizes that a lay person cannot simply be well-qualified to hold a post: He or she should be “distinguished by their spiritual life, good pastoral experience, sobriety of life and love of the poor, a spirit of communion and service, competence in the matters entrusted to them, and ability to discern the signs of the times” (Sec. 2, Art. 7). It is interesting that no such terms are listed as requirements for priests, although the pope has made clear that this is what he expects of priests as well; the document does stress that priests should get out of their offices and participate in pastoral activities whenever possible (Sec. 3, Art. 6).

The constitution also emphasizes synodality—the model of church leadership Pope Francis advocates that envisions greater collaboration between bishops and lay people. The new constitution says that the communion the church is called to “gives the church the face of synodality; a Church, that is, of mutual listening ‘in which each has something to learn. The faithful people, the College of Bishops, the Bishop of Rome: each listening to the others, and all listening to the Holy Spirit’” (Sec. 1, Art. 4).

The new constitution functions as a sort of manifesto of what each Vatican office’s mission is. In that light, it is interesting to see that the constitution specifically outlines one role of the Dicastery for Laity, Family and Life as “elaborating models of leadership roles for women in the Church” (Sec. 5, Art. 131). That is to say, the expansion in women’s leadership will continue as a matter of mission.

Pope Francis has further ensured that the church in the third millennium will increasingly be led by lay people.

The new constitution’s emphasis on lay leadership is best understood in the context of Vatican II, which recognized lay people—as the vast majority of the “people of God”—as the church’s most powerful resource for evangelization, witnessing to the faith in their daily lives.

Implementing Vatican II has been a primary goal of Pope Francis’ pontificate, especially after both John Paul II and Benedict XVI sought to slow or stall the pace of its implementation in what Benedict XVI called a “reform of the reform.” This constitution makes clear that the goals of Vatican II are the Curia’s goals, and Pope Francis frames the document as being in continuity with the post-Vatican II constitutions that preceded it (Sec. 1, Art. 3), but with an eye to the contemporary challenges facing the church.

In addition to the missionary role of the laity (Sec. 5, Art. 59), the new constitution places the language of Vatican II squarely in the mission descriptions of several important Vatican offices. For example, the constitution takes a cue from Vatican II’s call for religious orders to grow “according to the spirit of the founders” (“Lumen Gentium,” No. 45). That call proved transformative for orders who realized that their current work had grown distant from their founders’ original intent and sparked discernment on how they were called to carry out the founder’s mission today. The new Curial constitution makes clear that the Dicastery (formerly Congregation) for Institutes of Consecrated Life and Societies of Apostolic Life should ensure that religious orders “progress in the following of Christ as proposed by the Gospel, according to the proper charism born of the founder’s spirit and sound traditions” in order to contribute to the church’s evangelizing mission in the world (Sec. 5, Art. 123).

More strikingly, the constitution’s section on the Dicastery (formerly Congregation) for Divine Worship and the Discipline of the Sacraments opens with a telling mission statement: “The Dicastery for Divine Worship and the Discipline of the Sacraments promotes the sacred liturgy according to the renewal undertaken by the Second Vatican Council” (Sec. 5, Art. 88). In a nod to Vatican II’s emphasis on “full and active participation” and its goal of making the Mass more understandable across cultures, the constitution says that the dicastery should assist bishops’ conferences “in promoting, by effective and appropriate means, pastoral liturgical action, especially with regard to the celebration of the Eucharist and other liturgical sacraments and acts, so that the faithful may participate more actively in them.” Further, “together with the Bishops’ Conferences, it encourages reflection on possible forms of inculturated liturgies and accompanies their contextualization” (Sec. 5, Art. 89, emphasis added).

This Curia reform both codifies Francis’ other reforms and takes direct aim at the crises that have hurt the church’s credibility.

It advocates “studies and exchanges of experience” to support “Churches in the process of inculturation of the Good News of Jesus Christ” and “pays particular attention to popular piety,” two aspects of evangelization that have been central in Francis’ pontificate.

Interestingly, the constitution bears no reference to winning converts or to Catholicism as the one true religion, favoring instead the Vatican II language of the “mystical body of Christ” and tasking the interreligious dialogue office with “promot[ing] among all people a true search for God” (Sec. 5, Art. 149).

This vision of evangelization rather than proselytism is vintage Francis: As he wrote in the programmatic document for his papacy, “Evangelii Gaudium” (“The Joy of the Gospel”), “It is not by proselytizing that the Church grows, but ‘by attraction’” (No. 14).

That model of evangelization is only possible in a church that is attractive—that is, credible. This Curia reform both codifies Francis’ other reforms and takes direct aim at the crises that have hurt the church’s credibility. For example, it makes the Pontifical Council for the Protection of Minors a standing part of the church’s discipline office (Sec. 5, Art. 78) and cements past financial reforms, oversight bodies and legal structures. And, by making church leadership more cooperative between bishops and lay people, especially lay women, it may make the church more attractive to those disillusioned by the church’s lack of gender equity.

[Read this next: Is Reform Possible?: Historical and theological perspectives on the Roman Curia]