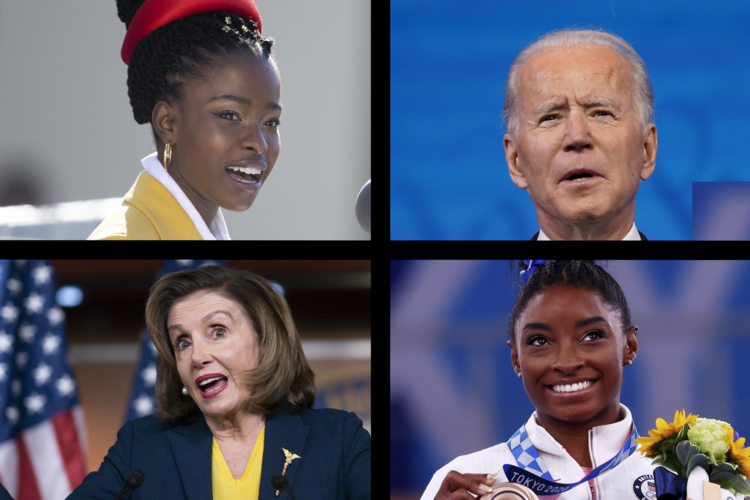 Two weeks after The Titanic sank in April 1912, the young journal America (just three years old) noted the terrible disaster and the way it had saddened the world. “Our sympathy goes out to the many of many lands whose friends and kindred, rich and poor, lowly and lofty, have been suddenly engulfed in the undistinguishing sea,” the editors wrote. Placed immediately after a congratulatory announcement of the 70th birthday of Cardinal John Farley, the archbishop of New York, the brief editorial noted something else: “For Catholics there is further consolation. Two Catholic priests were present to absolve and bless.”

The story fits an old canard among Catholic journalists about the occasional solipsism of news coverage in Catholic media. Over 1,500 dead in North Atlantic: What’s the Catholic angle?

In a year filled with good news and bad, more than a few Catholics stood out in the crowd (for better or for worse). Here's our top five.

We almost had a similar if much more frivolous moment earlier this year, when Britney Spears announced on Instagram: “I just got back from Mass” and “I’m Catholic now!” Alas, the pop princess deleted the posts a day later, and it seems like maybe she was just having a laugh at the expense of the media. We’re here for you when it’s time, Britney.

The past 12 months have featured many others in the news who are more forthright about their Catholicism, however, and we feel more confident reporting on their accomplishments. It’s the end of December and the close of 2021, which means it’s time for America’s take on our Top Five U.S. Catholic Newsmakers.

Joseph Robinette Biden Jr. was sworn in this year as the second Catholic President of the United States, 60 years after John F. Kennedy was sworn in as the first. While Catholics are much more ubiquitous in American public life these days—the Supreme Court is positively swarming with them—Mr. Biden’s faith still made plenty of headlines in 2021.

The so-called “Communion wars” had a major presence not only in the world of Catholic news, but also in secular media as well. The U.S. Conference of Catholic Bishops voted in June to draft a document on “eucharistic coherence” that seemed intended as a response to the president’s open support of legal abortion. In November, the U.S.C.C.B. ultimately released its document, which mostly drew off existing teachings on eucharistic theology and did not directly mention pro-choice politicians.

The so-called “communion wars” had a major presence not only in the world of Catholic news, but also in secular media as well.

President Biden had a personal meeting with Pope Francis in October, the longest meeting on record between a sitting U.S. president and a pope, and a video of the two showed them exchanging jokes and warm remarks. After their tête-à-tête Mr. Biden said that he had been told by the pope that he could continue receiving Communion, which, at least for now, has put that debate to rest.

Speaker of the House Nancy Pelosi has had a big year in Catholic news. In October, the Democrat had the “spiritual, personal and official honor” of meeting with Pope Francis at the Vatican to discuss issues of climate change, immigration and social justice.

Ms. Pelosi describes herself as a devout Catholic but has not been without religious controversy because of her pro-choice views on abortion. Archbishop of San Francisco Salvatore Cordileone, whose archdiocese includes Pelosi’s congressional district, made headlines for starting a “Rose and Rosary for Nancy” campaign. Almost 12,200 people joined in to pray for the Speaker to have a change of heart on abortion and sent her flowers to invoke the help of St. Thérèse of Lisieux.

Speaker of the House Nancy Pelosi met with Pope Francis at the Vatican to discuss issues of climate change, immigration and social justice.

Nancy Pelosi has also had a big year politically, successfully building a coalition in the House to pass legislative accomplishments like the "Build Back Better" bill, which would invest in childcare and education, combat climate change and expand affordable healthcare. Although the bill may not pass the Senate (despite being supported by a majority of Americans), it is an important attempt by the Biden administration to strengthen the middle class.

On Aug. 10, 2021, New York Governor Andrew Cuomo announced that he was resigning from office after multiple women alleged that he had sexually harassed them while in office. While denying the allegations of sexual harassment, he apologized to any women who he “truly offended.” After New York Attorney General Letitia James announced the findings of an investigation into the matter, the political tide quickly turned against Mr. Cuomo, and it grew increasingly likely that the state’s legislature would impeach and convict him.

Mr. Cuomo, the son of former New York Governor Mario Cuomo (who played his own significant role in U.S. Catholic history), had been widely considered a rising star in the Democratic Party and in national politics at large, a status that was cemented in the early months of the Covid-19 pandemic; his daily briefings on the spread of the virus became must-see television for many Americans, providing an image of reassurance and stability during a chaotic upheaval of everyday life.

When Kathy Hochul became the first female governor of New York on Aug. 24, she thanked her “big Irish Catholic family.”

However, beginning in Spring 2021, Mr. Cuomo’s administration was plagued by allegations that it had underreported the number of Covid-19 deaths in nursing homes in New York State, resulting in a startling political setback for the then-governor. The allegations of serial sexual harassment seem to have finished off his once-promising political career.

For those who liked the idea of another Catholic political dynasty, however, there is still a glimmer of hope: When Mr. Cuomo’s successor, Kathy Hochul, became the first female governor of New York on Aug. 24, the former lieutenant governor thanked her “big Irish Catholic family.”

The superstar gymnast, one of the winningest U.S. Olympians in history, made more headlines than usual when she unexpectedly announced that she was withdrawing from the women’s team final and all-around competitions this summer in Tokyo, citing mental health concerns. Sports commentators made clear that these concerns were no small potatoes: Given the level of focus required in gymnastics, any loss of concentration as a result of mental health issues could be fatal.

What can we say? Catholics always like a story that ends with a stunning comeback and trounces the expectations of haters.

Ms. Biles’s stepping down from the Olympics prompted backlash from several Republicans in Congress, who accused her of being a quitter. Ultimately, however ugly the conversation got at times, it did shine a light on the implications of mental health in professional sports.

Later in Tokyo, Ms. Biles returned to competition and ended up garnering a bronze medal on the balance beam final towards the end of the Games. What can we say? Catholics always like a story that ends with a stunning comeback and trounces the expectations of haters.

As the first-ever National Youth Poet Laureate, Amanda Gorman won the hearts of millions of Americans with her poem “The Hill We Climb” at Mr. Biden’s inauguration. The poem conceptualized America as “a nation that isn’t broken/ but simply unfinished” and took subtle shots at the red elephants in the room, Donald Trump and the Jan. 6 insurrection. Her reading was one of the most iconic moments of the inauguration.

Ms. Gorman is a proud Catholic and grew up attending mass at a predominantly Black and Latino parish in Los Angeles. When she performed her poetry for the congregation, she would get standing ovations from the pews. Her popularity is such that she was even invited to perform at the only event more important to American life than the presidential inauguration: the Super Bowl.

Best of all, Ms. Gorman actually has a brand new book out, just in time for Christmas! It would make a great gift for poetry lovers. When it comes to Ms. Gorman, we have only one other thing to say: Our poetry submissions are always open!