Mario Cuomo and a Changing of the Guard 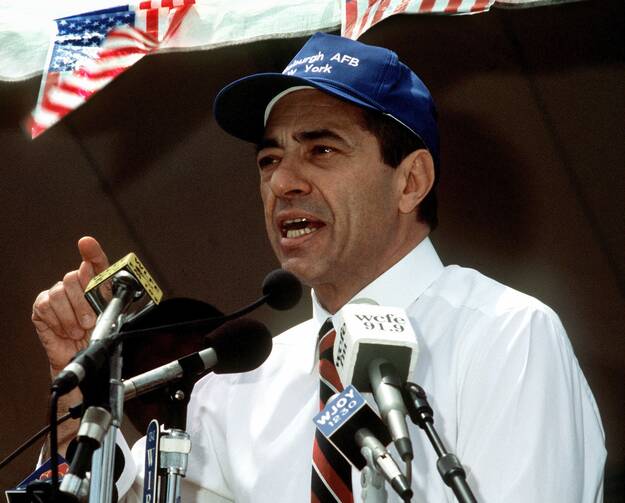 Three-term New York Governor Mario Cuomo passed away on New Year's Day at the age of 82, only hours after his son Andrew Cuomo was inaugurated in Manhattan for a second term as governor. “He couldn’t be here physically today, my father,” Andrew Cuomo said during his inaugural address. “But my father is in this room. He’s in the heart and mind of every person who’s here.”

To many U.S. Catholics, Mario Cuomo will always be the progressive leader who kept Catholic social teaching in civic play during an era of “welfare queen” poverty shaming and supply-side economics that trickled down into many aspects of U.S. civic life without actually lifting up the people it was purported to assist.

Two speeches that helped seal Mario Cuomo’s political legacy—for good or ill—took place in 1984. In a July keynote address at the Democratic Party convention, Cuomo threw down a gauntlet many hoped he would pick up in a presidential run himself someday, rebuking the Reagan administration’s depiction of the United States as a “shining city on a hill” by deploring its “tale of two cities” reality, a nation divided between the poor and ignored and the wealthy and connected.

“A shining city is perhaps all the President sees from the portico of the White House and the veranda of his ranch, where everyone seems to be doing well,” Mario Cuomo told an enraptured audience in San Francisco. “But there's another city; there's another part to the shining the city; the part where some people can't pay their mortgages, and most young people can't afford one; where students can't afford the education they need, and middle-class parents watch the dreams they hold for their children evaporate.”

That same year, Cuomo, as a politician and a Catholic, attempted to come to terms with legalized abortion in America. His formula, rejecting abortion as an immoral personal choice but one which he could not impose on others in a pluralistic society, became a template for other Catholic politicians, especially in the Democratic Party, but was condemned as betrayal of his faith by prominent Catholics.

Describing the church as his “spiritual home,” Cuomo said, “My heart is there, and my hope.….The acceptance of this faith requires a lifelong struggle to understand it more fully and to live it more truly, to translate truth into experience, to practice as well as to believe.”

Just a month after he roused Democrats at the convention, in an address at Notre Dame, he said, “The Catholic public official lives the political truth most Catholics through most of American history have accepted and insisted on: the truth that to assure our freedom we must allow others the same freedom, even if occasionally it produces conduct by them which we would hold to be sinful.

“I protect my right to be a Catholic by preserving your right to believe as a Jew, a Protestant or non-believer, or as anything else you choose. We know that the price of seeking to force our beliefs on others is that they might some day force theirs on us.”

After those two pivotal speeches, to the disappointment of many, a Mario Cuomo presidential candidacy never materialized--for reasons that the late governor never spelled out, at least to the satisfaction of U.S. media. That may not be so for Cuomo the younger, who appears to be readying himself for the national stage.

If Andrew Cuomo assumes the challenge his father, “the Hamlet on the Hudson,” declined, he will not have to confront a political controversy over faith and abortion that his father resolved for him and a generation of Catholic Democrats. In fact his enthusiasm for “reproductive rights” in New York suggests an ethical comfort level with legalized abortion that his father did not achieve during his political career.

In other respects, the father and son appear to share political impulses. Yesterday Andrew Cuomo detailed a political agenda—targeting public education, a malfunctioning criminal justice system and economic inequity—that his father surely would approve, punctuating his proposals with a rhetorical flourish that was all-in-the-family: “The American promise itself is being questioned,” Andrew Cuomo said. “The offer of fairness and opportunity that was the American compact is now in doubt.”

Kevin Clarke
@ClarkeAtAmericaclarke@americamedia.org
Show Comments (
3
)
Comments are automatically closed two weeks after an article's initial publication. See our comments policy for more.
Carlos Orozco
7 years 11 months ago
The Cuomos represent an aspect of many Catholics failing America, by failing to live up to their faith. The Catholic ethics of the Cuomos are as incomplete and biased as that of fomer-Senator Rick Santorum. The Cuomos made peace with abortion, Santorum with imperial warfare. Both sides embraced a certain face of the culture of death. Is it not grand-bargaining with the devil? By sacrificing the integrity of their faith, they have failed themselves and their country.
Frank Bergen
7 years 11 months ago
I think I recall someone saying,long ago and far away, "Let him who is without sin cast the first stone." Let him who would forbid abortion do two things: support affordable and available contraception to every woman of child-bearing age in this country, and stand with those women who find themselves pregnant without the spiritual, material, or other capacity to bear and rear a child, and see mother and child through to a satisfactory outcome.
Jonathan Lunine
7 years 11 months ago
Mario Cuomo very much lived his faith, particularly by standing up for the poor in an era when at the highest levels of the federal government they were being neglected as a matter of the governing party's policies. And his comments about the challenges faced by those who would serve in public office and hold to their Catholic faith are right on. Cuomo expressed his faith through his works, and regardless of his imperfections (who among us is perfect?) did good for his fellow human beings.