The church’s abuse crisis taught me not to trust my heroes—so why was I so shocked by Andrew Cuomo? 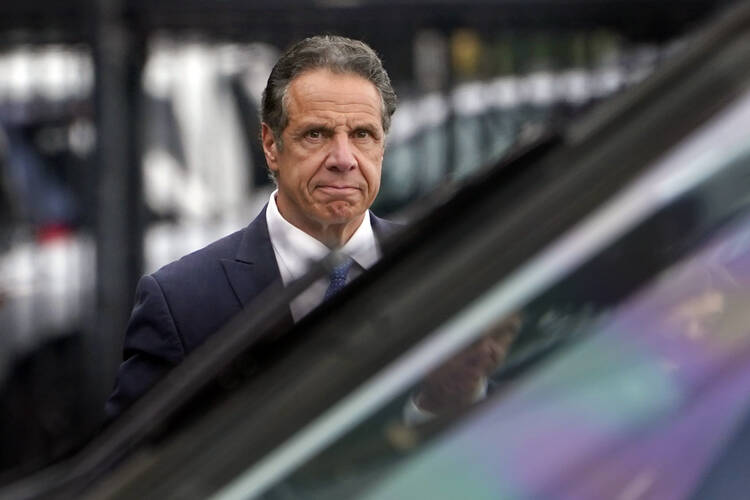 In the worst months of the pandemic in California, as we all stayed locked up tight in our homes listening to the ambulances and praying for things to get better, I found the one thing you could count on was New York Governor Andrew Cuomo. While California Governor Gavin Newsom basically vanished from the scene after being caught attending a party for a lobbyist in a fancy restaurant while much of the state was in lockdown, each day Mr. Cuomo was on television encouraging people, making sensible decisions—in and of itself a precious commodity the last two years—and providing comfort simply by his willingness to be present every day. From the outside he seemed like New York’s Dad, and I think a lot of us wished we had someone like him running our state.

To discover that at the same time he was having his fireside chats he was trying to suppress reports of his sexually harassing women, and working to obscure the number of pandemic-related deaths among elderly New Yorkers in nursing homes, has left me sickened and stunned. (Mr. Cuomo has denied the allegations of sexual harassment but apologized to any women who he “truly offended.”)

From the outside Andrew Cuomo seemed like New York’s Dad, and I think a lot of us wished we had someone like him running our state.

The more I sit with what we have learned, the more disgusted I become with myself, as well. Our recent history is filled with stories of celebrated men who have secretly perpetrated horrific acts of one form or another, often with the assistance or tacit acceptance of many others. My entire work life as a priest has included one wave after another of revelations of violence and cover-up in the church, some of them including acts perpetrated by men I have lived with or deeply admired, and institutional leadership often continuing to lean into secrecy despite it all. The sexual abuse of children is a different situation than Andrew Cuomo’s, but underlying it is the same issue of power, abuse and cover-up.

I am as fond as anyone of dismissing conspiracy theorists, but I wonder who is the bigger fool—the person who sees conspiracies where they aren’t or the one who continues to be surprised to discover that rich and powerful people that we trust are secretly engaged in reprehensible deeds?

At some point you begin to wonder whether there is anyone in leadership who we can count on for decency, or whether every single one is just one whistleblower away from being outed as another Andrew Cuomo.

At some point you begin to wonder whether there is anyone in leadership who we can count on for decency, or whether every single one is just one whistleblower away from being outed as another Andrew Cuomo.

Where do we turn to find hope or any sort of confidence going forward? How do we get beyond the embarrassment and despair of having been duped again?

At moments like this, I take solace in the Psalms. While many books of the Bible provide an ongoing storyline and characters, the Book of Psalms is a collection of 150 different prayers written by an unknown person or persons to God. Some are buoyantly optimistic and celebratory —“The heavens declare the glory of God” (Ps 19). Others are reassuring statements of faith—“The Lord is my shepherd, there is nothing I shall want” (Ps 23).

But still other psalms offer cries of outrage, petition or lament. “Awake, Lord! Why do you sleep? Rouse yourself!” cries the writer of Psalm 44 after describing the hardships the people of Israel have been put through for no apparent reason. “Why do you hide your face and forget our misery and oppression?” (Ps 44:23-24).

Offered as a prayer—often one set to music—my concerns seem less a rant than a cry for help.

There is something comforting about reading a psalm that expresses my own experiences. It is like discovering evidence that I am not alone in my pain or struggle. Others have walked this road before me. Offered as a prayer—often one set to music—my concerns seem less a rant than a cry for help.

In our own situation, I find Psalm 10 particularly helpful. Where many psalms focus on begging for God’s action or mercy, Psalm 10 spends most of its time cataloguing the crimes of the wicked.

Why, O Lord, do you stand far off?
Why do you hide yourself in times of trouble?
In arrogance the wicked persecute the poor—
Let them be caught in the schemes they have devised....

Their mouths are filled with cursing and deceit and oppression;
Under their tongues are mischief and iniquity.
They sit in ambush in the villages;
In hiding places they murder the innocent.

Each subsequent act of malice, all of them described in such a way as to emphasize the animalistic nature of the perpetrators, is like another moment of confirmation. Yes, this is what it is like right now. This is what we are seeing. And it isn’t right.

Facebook wants you to pray with them. Don’t trust their intentions.
Jim McDermott

Having heard my confession, a priest once said to me, “Yeah, it’s not the kingdom, is it?” Confronted by the dichotomies between Mr. Cuomo’s appearance and reality, it is once again abundantly clear just how far from the kingdom we are. Another psalm, 146, puts this frustration succinctly in the form of advice. “Put not your trust in princes, nor in the children of men,” the psalmist says; we are smart to free ourselves from the fictions of worldly leaders.

Saying so does not make the situation better. But it acknowledges the reality of the moment. Perhaps, like the psalmist, we can vent our frustration and despair in cries of prayer to one in whom we can trust.