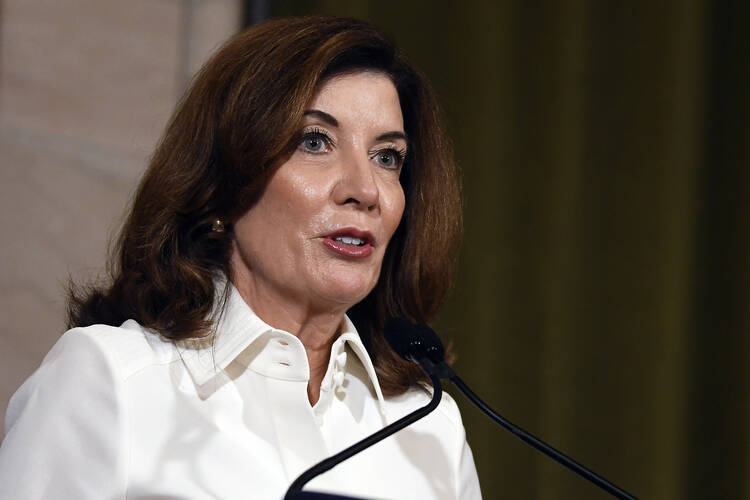 ALBANY, N.Y. (AP) — Kathy Hochul became the first female governor of New York on Tuesday, vowing to bring new energy and urgency to solving immense challenges as she took over an administration criticized for inaction during Andrew Cuomo’s distracted final months in office.

Hochul, a Democrat and former member of Congress from western New York, took the oath of office just after midnight in a brief, private event overseen by the state’s chief judge, Janet DiFiore.

At a ceremonial swearing-in later Tuesday morning at the State Capitol, Hochul promised a “fresh, collaborative approach” in state government.

“I want people to believe in their government again,” Kathy Hochul said. “It’s important to me that people have faith.”

“I want people to believe in their government again,” she said. “It’s important to me that people have faith.”

She noted that she had already begun speaking with other Democratic leaders who have, for years, complained about being shut out of key decisions and of being bullied by Cuomo, including New York City Mayor Bill de Blasio.

Hochul also thanked her “big Irish Catholic” family, including her two children and Bill Hochul, her husband of over 30 years. Her immediate family sat in the front row, wearing masks and spaced slightly apart. Hochul, her daughter and daughter-in law wore white to honor suffragists.

Hochul also thanked her “big Irish Catholic” family, including her two children and Bill Hochul, her husband of over 30 years.

Over the next few months, Hochul, who was little known as lieutenant governor, will have an opportunity to reshape Albany, where Cuomo dominated decision-making for years before being felled in a sexual harassment scandal.

For generations, it’s been said that all of the real decisions in the state government were made by “three men in a room” — the governor and the leaders of the state Senate and Assembly.

Now, for the first time, two of those three — Hochul and Senate Majority Leader Andrea Stewart-Cousins — are women. Only the state Assembly is led by a man, Speaker Carl Heastie.

Hochul met with those two leaders Tuesday morning before a planned public address at 3 p.m. Both Stewart-Cousins and Heastie emerged saying that they appreciated her “collaborative” tone, and that they were ready to work with her to get COVID-19 relief funds to New Yorkers in need more quickly.

Cuomo left office at midnight, two weeks after he announced he would resign rather than face an impeachment battle that appeared inevitable after a report by independent investigators — overseen by state Attorney General Letitia James — concluded he had sexually harassed 11 women.

On his final day in office, Cuomo released a recorded farewell address in which he again said he was innocent and portrayed himself as the victim of a “media frenzy.”

On his final day in office, Cuomo released a recorded farewell address in which he again said he was innocent and portrayed himself as the victim of a “media frenzy.”

Hochul takes over a state still dealing with the coronavirus pandemic.

In the coming weeks, she is expected to decide whether to require masks for children returning to school, something she has already said she favors.

She will be under pressure to get federal rent relief money into the hands of tenants. Little of the $2 billion set aside by the federal government to help New Yorkers pay off rent debt has been distributed. Thousands face the possibility of eviction after state and federal protections expire.

Hochul promised Tuesday to make getting that money out a top priority, saying people shouldn’t have to “wait one second longer.” She also pledged quick action to distribute money from a new $2 billion state fund intended to benefit unauthorized immigrants who didn’t qualify for other types of federal pandemic relief aid.

“The money’s there,” Hochul said. “These people are not eligible for other forms of assistance, and they’re hurting and they’re part of the New York family.”

Former Gov. David Paterson, who, like Hochul, unexpectedly became governor when his predecessor resigned, said she will need to restore faith.

Former Gov. David Paterson, who, like Hochul, unexpectedly became governor when his predecessor resigned, said she will need to restore faith.

“There’s going to be some pressure on Gov. Hochul, as there was on me, to kind of restore the values and to restore the conduct and the decorum that bespeaks a governor,” Paterson said.

She’ll also have to work quickly. Hochul has already said she intends to run for a full term next year and will have just months to establish herself as the favorite before a spring Democratic primary.

In the meantime, she’ll be building an administration — a task that began in the first minutes of Tuesday with the oath of office, hours ahead of the restaging of the event for television cameras in mid-morning.

DiFiore administered the oath in the Capitol in front of a stone fireplace, atop which were placed family pictures.

Hochul, her husband and DiFiore entered the room wearing masks, taking them off when the ceremony began. Hochul placed her hand on a Bible held by her husband, a former federal prosecutor and current general counsel for Buffalo-based food service and hospitality company Delaware North.

Hochul signed a pile of papers, including the oath, using a set of 10 pens dated “August 24, 2021,” while her family stood behind her, looking on. She then thanked members of her staff and told them she’d see them tomorrow, then left the room.

Marina Villaneuve — The Associated Press
Provide feedback on this article
Join the conversation: Login or create an account
Before you can comment, you need to update your profile to include your first and last name, as required in our comments policy. Then reload this page and you'll be set up for commenting. Update your profile