Explainer: Pope Francis doesn’t spend summer vacation at the papal summer castle. So what does he do to relax? 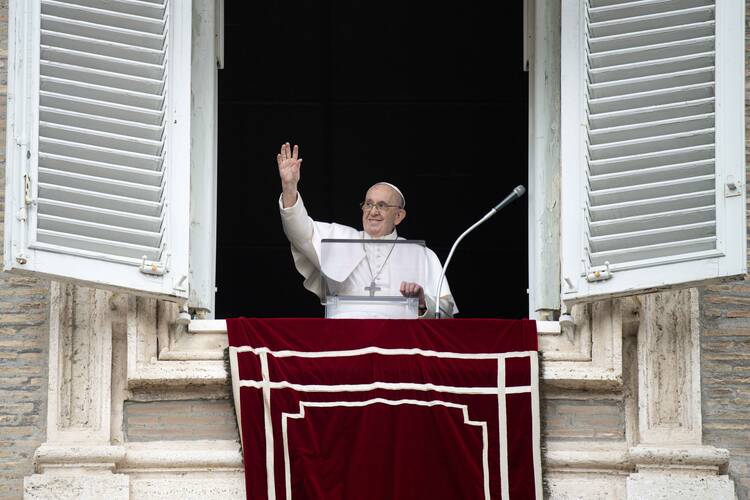 Pope Francis greets the crowd as he leads the Angelus from the window of his studio overlooking St. Peter's Square at the Vatican July 25, 2021. (CNS photo/Vatican Media)

While previous popes vacationed at the opulent Castel Gandolfo, a 12th-century fortress acquired and renovated by the Vatican at the turn of the 17th century, Pope Francis has shunned the castle in favor of working staycations in Rome—and may have set a precedent for future popes.

The fortress at Castel Gandolfo lies on a picturesque lake surrounded by mountains, a 10-minute helicopter ride from the Vatican. It was purchased by the Apostolic Camera—also known as the pope’s treasury—in 1596 and was renovated 30 years later by Pope Urban VIII, who added a new wing to the building. From then on, it served as a scenic getaway for popes, undergoing gradual expansions and even the development of a small farm that provided fresh food for the popes. Pope John Paul II famously added a swimming pool to the property, where the athletic pope was hunted down by paparazzi who snapped photos of the pope in his swim trunks.

Not all popes have taken advantage of their vacation digs, though. One historian told CNN that of the 33 popes who have had the castle available to them, only 15 have actually vacationed there. But at least one has opened the castle to those in need: During World War II, Pope Pius XII opened the castle to refugees. His bedroom was repurposed as a delivery room where some 40 babies were born.

During World War II, Pope Pius XII opened Castel Gandolfo to refugees. His bedroom was repurposed as a delivery room where some 40 babies were born.

Still, prior to Francis, it had been decades since a pope last decided not to use the residence. Pope Benedict XVI lived there for two months after his resignation in 2013 while he waited for his rooms in the Vatican monastery where he currently lives to be refurbished. Pope Francis’ decision not to stay there has hit the surrounding town, also called Castel Gandolfo, hard. The town has counted on tourists interested in seeing the pope’s vacation house to contribute to their local economy. In order to ease the burden—and generate some funds for the Holy See—the Vatican began opening parts of the castle to tourists in 2013, finally opening almost all of it as a museum in 2016.

“​​We fear it will be a tombstone for us if future popes follow his example,” the town’s mayor told Reuters at the museum’s opening. “The fact that the palace is now a museum will make a reversal in the future difficult.”

How does Pope Francis spend his summer?

As in most of Italy, work in the Vatican slows significantly during the hottest months of the year, July and August. The pope ordinarily cancels his public audiences—the Sunday Angelus he leads from his window overlooking St. Peter’s Square and the Wednesday general audiences where the pope greets pilgrims from around the world—for the month of July. His private meetings with heads of Vatican departments and bishops coming for their ad limina visits are put on hold, too.

That does not mean all of the pope’s meetings stop: Sometimes heads of state will still visit during the summer recess, as Russian President Vladimir Putin did in 2019. The pope also pops into different Vatican offices that will be working over the summer to say hello and thank them for their work. Sometimes he takes day trips within Italy, as when he visited inmates at a prison in Isernia in July 2014 or when he stopped in to visit an elderly nun who was about to undergo surgery in August 2019.

The pope might also have private meetings with personal guests. “He’ll meet people that he hasn’t been able to see perhaps during the year,” America’s Vatican correspondent, Gerard O’Connell, told me in a 2019 interview on the pope’s vacation habits.

As for how Pope Francis spends his time outside of meetings, Mr. O’Connell said he often takes the time to work on long-term projects, like writing longer documents. For a few summers in a row, Vatican watchers have suspected that the pope is putting the finishing touches on a new constitution for the Roman Curia, which will be a major document reforming the central structures of the Holy See.

How does the pope relax?

Of course, it wouldn’t be summer without a little rest and relaxation. In his downtime, Pope Francis is a voracious reader. (You can find our “Pope Francis Summer Reading List” here.) The pope also likes to sit back and listen to music.

When he was a child, his mother would tune in to opera music on the radio, Mr. O'Connell said. “He likes classical music. The chancellor of Germany, Angela Merkel, gave him a whole collection of, I think, Beethoven.”

One thing Pope Francis won’t be doing: watching TV. In a 2015 interview, the pope revealed he had not watched television since 1990, when he made a promise to the Virgin Mary that he wouldn’t. An avid soccer fan, Pope Francis gets updates on his favorite team, San Lorenzo, from the Swiss Guards.

What is different this year?

The pope’s summer has looked different this year because of both the coronavirus, which has cut down on the number of people visiting the Vatican for meetings, and his the pope’s intestinal surgery in early July.

The pope underwent surgery the afternoon of July 4 after leading the Sunday Angelus prayer in the morning. He had been experiencing some discomfort due to a swelling of his intestine and had to have part of the intestine removed. The pope’s recovery has taken up most of his “staycation” month. He spent about a week in the hospital, where a Vatican spokesman said he got back to work within a few days, making phone calls from his hospital bed. He also led the Sunday Angelus from the balcony of the hospital.

After that, he spent the rest of July resting and recovering at home—though given the pope’s usual pace, it is likely he was working as well. According to the Holy See Press Office’s calendar for journalists, the pope is expected to be back to giving his Wednesday general audience on Aug. 4.

Colleen Dulle is an associate editor at America and host of the Inside the Vatican podcast.