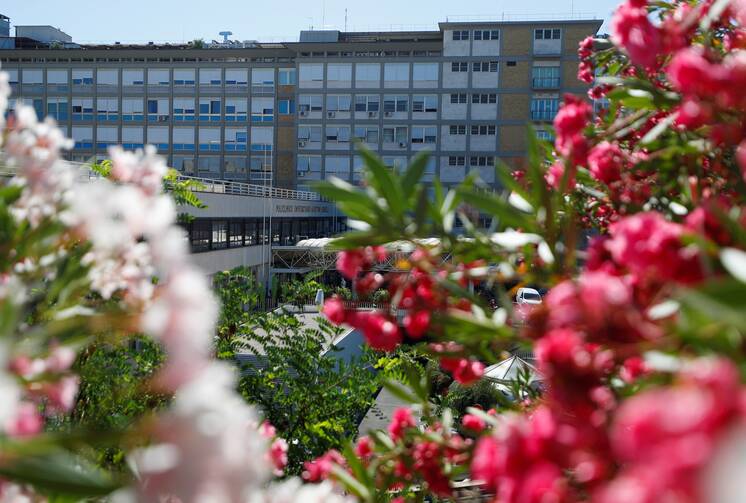 This is a view outside Gemelli hospital in Rome where Pope Francis had a prescheduled colon surgery July 4, 2021. Pope Francis' recovery from colon surgery continues to go well, the Vatican said. (CNS photo/Guglielmo Mangiapane, Reuters)

Pope Francis continues to recover well from the intestinal operation he underwent on July 4. He has walked in the corridor, resumed work, celebrated Mass, and is eating regularly. The pope will recite the Angelus from the 10th floor of Rome’s Gemelli Hospital next Sunday.

These details were included in the fifth post-operation report from the Director of the Holy See press office, Matteo Bruni, based on the information given to him by the doctors at the Gemelli Hospital where Pope Francis is recovering from the three-hour operation.

The fact that Francis will recite the Angelus from hospital confirms an earlier report that the pope would be in the hospital for “around 7 days, unless there are complications.”

“Pope Francis spent a quiet day with normal clinical progress. He continued to eat regularly and continued his scheduled treatment”, Mr. Bruni said July 9. He added that “following the brief episode with a slight temperature” yesterday, “the Holy Father is without fever.”

Mr. Bruni revealed that the pope “walked in the corridor and resumed his work, alternating it with moments of reading texts.” We know, for example, that the pope sent a message to the people of Haiti yesterday, following the assassination of that country’s president. Italian daily newspaper Il Messaggero reported that Francis has returned to making phone calls again.

Pope Francis continues to recover well from the intestinal operation he underwent on July 4. He has walked in the corridor, resumed work, celebrated Mass, and is eating regularly.

Mr. Bruni also reported that yesterday afternoon, July 8, Francis “celebrated Holy Mass in the chapel of his private apartment, attended by all those assisting him during his hospitaliation.” The hospital suite where he is now recovering is mainly reserved for treating popes and has a private chapel; it was there that he said the Mass.

As mentioned earlier, Mr. Bruni announced that Pope Francis will recite the Angelus mid-day prayer from the 10th floor of the Gemelli Hospital on Sunday, July 11, which is expected to be broadcast online and on Vatican Radio.

In reciting the prayer from the hospital, he will follow in the footsteps of John Paul II who was hospitalized seven times in this same hospital during his long pontificate and recited the Angelus (or the Regina Coeli during the Easter season) several times from this same suite on the tenth floor of the hospital. The first was on May 17, 1981, four days after the assassination attempt on John Paul II's life when he told the world by radio, “I pray for the brother who struck me, whom I have sincerely forgiven. United to Christ, Priest and Victim, I offer my sufferings for the church and for the world."

The last was on Feb. 6, 2005, as John Paul II was nearing the end of his life and was only able to impart his blessing.  Archbishop Leonardo Sandri, then "sostituto" or chief of staff, read his message on that occasion.

The fact that Francis will recite the Angelus from hospital confirms an earlier report that the pope would be in the hospital for “around 7 days, unless there are complications.”

Besides the countless good-will messages to the pope from cardinals, bishops, other members of the faithful, and heads of state, children from the oncological ward of the hospital have also send touching messages to him, as did Giulia, a child from the Bambino Gesú children’s hospital in Rome, who drew a picture of a child holding his hand and saying, “Dear Pope Francis, hear my prayer as I heard yours when I was ill.” The pope sent his greetings “to the young patients in the nearby pediatric oncology and children’s neurosurgery wards” on July 7.

Pope Francis is expected to return to the Santa Marta guesthouse in the Vatican where he resides next week, but the precise date will depend on the progress of his recovery.

He will rest there for the remainder of the month—July is ordinarily when he takes his “home holiday”—as all public and private audiences have been cancelled until Aug. 4.