Why should the church reach out to L.G.B.T.Q. people? Some shocking statistics can answer that. 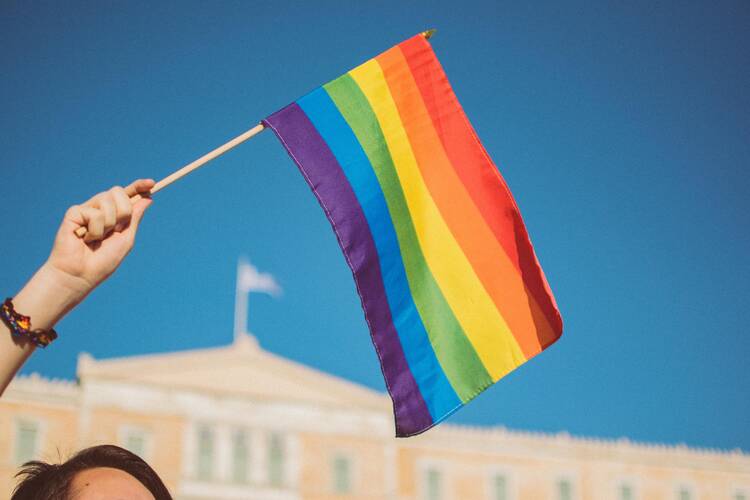 We should reach out not simply because they are Catholics—meaning L.G.B.T.Q. Catholics, who are part of the Body of Christ—but because we are Catholic. Part of being Catholic, part of being Christian, is standing on the side of those who are rejected, excluded or marginalized, as Jesus chose to do. As we Jesuits say, it also means “walking with the excluded.” And L.G.B.T.Q. people are among the most excluded in our church.

I cannot tell you how many L.G.B.T.Q. Catholics have reported to me the hateful and homophobic comments they have heard from their priests, deacons, brothers, sisters, lay pastoral associates, bishops, directors of religious education and schoolteachers, all supposedly speaking for the church. Almost every day I receive messages through social media, from people asking, “Where am I supposed to go now that my pastor treats me like this?” or, “How can I respond to my daughter’s principal who says these things?” or, “How can I stay in the church when I hear homilies like this?”

One woman told me that after she told a priest that she was gay, he said that he had prayed since his ordination that he would never meet a gay person. In some parishes, homilies saying that the L.G.B.T.Q. “agenda” is satanic, identifying L.G.B.T.Q. people with the devil and equating same-sex marriage with abortion are not only common, but expected.

Negative messages about L.G.B.T.Q. issues are one of the most significant reasons that Catholics leave the church.

In fact, one P.R.R.I. survey from 2016 has shown that negative messages about L.G.B.T.Q. issues are one of the most significant reasons that Catholics leave the church, and they do so in greater proportions than in any other religion. Comparing former Catholics to the overall population of Americans who have left their childhood religions, the report stated:

Some statistics from DignityUSA, an advocacy group for Catholic L.G.B.T.Q. people, may put this in further perspective.

DignityUSA informally surveyed people who have left the church, not just L.G.B.T.Q. people, and asked: “Did teachings on LGBTQ+ issues have anything to do with your leaving?” Fifty-five percent said yes.

L.G.B.T.Q. people who no longer identify as Catholic were asked, “Was being LGBTQ+ the major reason for leaving the church?” Sixty-four percent said yes.

When L.G.B.T.Q. people were asked, “Have you ever felt uncomfortable or directly discriminated against in a Catholic church or event?” Seventy-two percent said yes.

Those statistics alone should be enough to make us want to undergo a metanoia, a change of mind and heart, and make us ask why our church is not only not a welcoming place to L.G.B.T.Q. people, but actively unwelcoming.

Issues of prejudice against L.G.B.T.Q. people, especially young people, are not just matters that affect church attendance; they are truly life-and-death issues.

But issues of prejudice against L.G.B.T.Q. people, especially young people, are not just matters that affect church attendance; they are truly life-and-death issues. Often well-meaning Catholics do not know the facts, so it is helpful to review them. They come from a 2020 survey from the Trevor Project, an organization that works to prevent suicide among L.G.B.T.Q. youth. The survey states that suicide is consistently the second leading cause of death among young people and disproportionately impacts L.G.B.T.Q. youth.

And according to a survey of students in grades nine through 12, completed in 2015 and published by the Centers for Disease Control and Prevention, 29 percent of gay, lesbian and bisexual individuals reported having attempted suicide during the previous year, compared with 9 percent of all students. (Because data on the incidence of suicide among L.G.B.T.Q. individuals is still scarce, the National Action Alliance for Suicide Prevention has called for “more timely and accurate suicide-related data,” in part by “including valid and reliable questions on sexual orientation/gender identity on national surveillance systems.”)

The Trevor Project’s 2020 National Survey on LGBTQ Youth Mental Health represents the experiences of over 40,000 L.G.B.T.Q. youth, from ages 13 to 24, across the United States and is the largest survey of L.G.B.T.Q. youth mental health ever conducted. It reminds Catholics of the need for the church to take seriously the effects of stigmatizing language on youth. And again, you may be surprised at some of these survey results, but they must be confronted.

40 percent of L.G.B.T.Q. respondents answered that they had seriously considered attempting suicide in the past 12 months.

48 percent of L.G.B.T.Q. youth reported engaging in self-harm in the past 12 months.

46 percent of L.G.B.T.Q. youth reported they wanted psychological or emotional counseling from a mental health professional but were unable to receive it in the past 12 months.

10 percent of L.G.B.T.Q. youth reported undergoing conversion therapy, with 78 percent reporting it occurred when they were under age 18. And conversion therapy, which does immense mental, emotional, spiritual and sometimes even physical harm, is something that, as America Media reported, is still actively promoted in many places in the Catholic Church.

1 in 3 L.G.B.T.Q. youth reported that they had been physically threatened or harmed in their lifetime due to their L.G.B.T.Q. identity. Twenty-nine percent of L.G.B.T.Q. youth said they have experienced homelessness, been kicked out or run away.

Here’s something even more positive to consider. L.G.B.T.Q. youth who report having at least one accepting adult were 40 percent less likely to report a suicide attempt in the past year, according to the Trevor Project. That adult can be a priest, deacon, lay pastoral associate, a teacher, a school lunch attendant, a parishioner, etc. Sometimes, it won’t be the parent (although even better if it is the parent).

These statistics should make us want to approach our L.G.B.T.Q. brothers, sisters and siblings with “closeness, compassion and tenderness.”

Now let’s look at L.G.B.T.Q. people overall—and here we are talking about adults too. They are nearly four timesmore likely than non-L.G.B.T.Q. people “to experience violent victimization, including rape, sexual assault and aggravated or simple assault,” according to a study by the Williams Institute at U.C.L.A. School of Law. And as of 2019, according to the F.B.I., one in five hate crimes were motivated by anti-L.G.B.T.Q. bias.

By the way, another U.C.L.A. study shows that among the approximately 11.3 million L.G.B.T.Q. adults in the United States, there are an estimated 1.3 million Roman Catholics—24.8 percent of all religiously affiliated L.G.B.T.Q. adults. These people, members of the Body of Christ, are hearing what we say and seeing what we do.

When we look at this phenomenon internationally, we should be even more alarmed. In many countries, the church could be, if it chose to, a powerful voice for protection, love, mercy and compassion on behalf of L.G.B.T.Q. people, who are often physically endangered.

Many countries are deemed potentially dangerous for their L.G.B.T.Q. population due to both discriminatory legislation and threats of violence. These include countries where the dominant religion is Islam, many African and Asian countries and some formerly Communist countries, including Poland with its “L.G.B.T.-free zones.”

These facts can shock Catholics. But they should not overwhelm us or cause us to despair. Because despair is not coming from God.

In that case, how do we respond to what we feel when we hear those terrible statistics? As ever, looking at the example of Jesus—who always took the side of those who were rejected, marginalized, isolated, mocked, beaten or abused—can help us move ahead.

These statistics should make us want to approach our L.G.B.T.Q. brothers, sisters and siblings with the same “closeness, compassion and tenderness,” to use Pope Francis’ words, with which God approaches them.

Correction, Aug. 2, 2021: The name of one organization that provided survey data was listed incorrectly. It is DignityUSA, not Dignity.