Pope Francis greets the public from hospital balcony: ‘I am glad to be able to keep the Sunday Angelus appointment’ 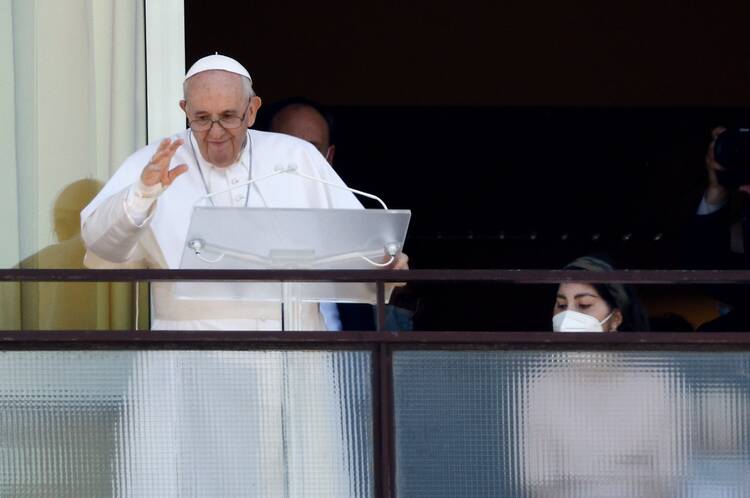 Pope Francis greets the crowd as he leads the Angelus from a balcony of Gemelli Hospital in Rome on July 11, 2021, as he recovers from intestinal surgery. (CNS photo/Guglielmo Mangiapane, Reuters)

Pope Francis looked well and in good form as he greeted hundreds of Romans and pilgrims in the square below him, and a global audience following on streaming video, from the balcony of his 10th-floor suite at the Gemelli Hospital on Sunday, July 11, exactly one week after his three-hour intestinal operation.

Television cameras and photographers from all over the world had gathered on a site below the hospital window to capture this emotional moment as Pope Francis appeared in public for the first since his operation last Sunday evening.

The 84-year-old pope looked happy as he greeted the crowd of young and old, as well as priests, nuns and hospital staff that had gathered in the square outside the hospital, and the patients and staff gathered on nearby balconies. They had been praying and singing hymns under the blazing sun, waiting for him to appear.

Pope Francis: “I thank you all: I have deeply felt your closeness and the support of your prayers. Thank you from the bottom of my heart!”

They cheered loudly and enthusiastically when he came out on the balcony at midday, accompanied by some young children who are patients at the hospital and a few hospital staff. They waved to him and applauded. He waved back. The Vatican transmitted the event on streaming video; many television outlets from around the world also transmitted it live.

“Dear brothers and sisters, buongiorno [“good day”]!” Pope Francis said with a strong voice. “I am glad to be able to keep the Sunday Angelus appointment, even here from the Gemelli Polyclinic.”

“I thank you all: I have deeply felt your closeness and the support of your prayers. Thank you from the bottom of my heart!” he said, responding to their presence and also alluding to the outpouring of messages for a speedy recovery that he had received from across the globe, and for the prayers raised in homes, parishes and dioceses across the world for his well-being.

“Sooner or later we all need this ‘anointing,’ and we can all give it to someone else, with a visit, a phone call, a hand outstretched to someone who needs help.”

He recalled that the Gospel read at Mass today recounted how the disciples Jesus sent out “anointed with oil many that were sick and healed them” (Mk.6:13). Francis said “this ‘oil’ is certainly the sacrament of the Anointing of the Sick, which gives comfort to spirit and body.” It raised the question whether he was given this anointing before his operation.

Francis explained that “this ‘oil’ is also listening, the closeness, the care, the tenderness of those who take care of the sick person: It is like a caress that makes you feel better, soothes your pain and cheers you up.”

He told his global audience, “Sooner or later we all need this ‘anointing,’ and we can all give it to someone else, with a visit, a phone call, a hand outstretched to someone who needs help.” Adding to his prepared text, he reminded everyone that at the Last Judgment we will be judged by “the protocol” of the 25th chapter of the Gospel according to St. Matthew, and one of the things we will be asked regards “closeness to those who are ill.”

The pope emphasized the importance of having a health care system that is accessible to all: “This precious benefit must not be lost. It needs to be kept!”

Then, in a significant statement, the pope emphasized the importance of having a health care system that is accessible to all, something he has constantly called for, and insisted on ever more forcefully as the Covid-19 pandemic swept across the world.

“In these days of being hospitalized, I have experienced how important good health care is, [that is] accessible to all, as it is in Italy and in other countries. A health care system that is free, that assures good service, accessible to everyone. This precious benefit must not be lost. It needs to be kept! And for this everyone needs to be committed, because it helps everyone and requires everyone’s contribution,” he stated.

Explainer: What kind of surgery did Pope Francis have?
Maria Cheng - Associated Press

Again, adding to his prepared text (that was given in advance to journalists), Francis said, “sometimes in the church it happens that a health institution [hospital], because of a not good management, is not going well economically and so the first thought that comes to mind is to sell it.” But, he said, “the vocation in the church is not to have money, it is to provide service, and the service is always free.” Then, he added, drawing strong applause from the crowd. “Do not forget this: save the free institutions!”

Next, Francis expressed his thanks to all those who have cared for him in these eight days at the Gemelli Hospital. He looked very well, and only coughed slightly twice as he spoke.

He said: “I would like to express my appreciation and my encouragement to the doctors and all health care workers and hospital staff. They work a lot!”

Turning next to those who are ill, he said, “And let us pray for all the sick.”

Drawing attention to the children next to him on the balcony, he said, “here are some children friends” and asked, “Why do children suffer? Why do children suffer is a question that touches the heart. Let us accompany them with prayer and pray too for all those who are ill, especially for those in the most difficult conditions. May no one be left alone, may everyone receive the anointing of listening, closeness and care. Let us ask this through the intercession of Mary, our Mother, Health of the Sick.”

After reciting the Angelus prayer with those present, and imparting his blessing to the global audience, Francis turned to the dramatic situation in Haiti following the assassination of the country’s president last week.

“In these last days my prayer has often turned to Haiti, after the killing of the president and the wounding of his wife. I join the pressing appeal of the bishops of that country to lay down the arms, to choose life, to choose to live together as brothers and sisters for the good of all and in the interest of Haiti,” he said. “I am close to the dear people of Haiti; I wish that this spiral of violence may end, and that the nation can take up again the journey to a future of peace and harmony.”

“I am close to the dear people of Haiti; I wish that this spiral of violence may end, and that the nation can take up again the journey to a future of peace and harmony.”

He recalled too that the church today celebrates “The Day of the Sea,” which “is dedicated in a particular way to sailors and all who have the sea as their source of work and sustainment.” Francis said, “I pray for them, and I exhort everyone to take care of the oceans and the seas. Care for the health of the seas: no plastic in the sea!”

He extended a greeting and his blessing to those who are on a pilgrimage to the shrine of Our Lady of Czestochowa, in Poland, with Radio Maria.

Pope Francis recalled that today is the feast of St. Benedict, the abbot and patron of Europe, and he extended his greeting to “all the Benedictine monks and sisters throughout the world,” and also to Europe itself, “that it may be united in its founding values.”

As usual, Francis concluded by wishing everyone a happy Sunday and a good lunch. He asked everyone, “do not forget to pray for me” and said farewell until next Sunday.

Given how he looked today, and how strong he seemed, many here in Rome expect him to return to the Vatican in the coming days, but the Vatican has not confirmed this yet. He will probably be back in Santa Marta before they will announce his return home.