Do Pope Francis and Pope Benedict disagree about Vatican II and the traditional Latin Mass? 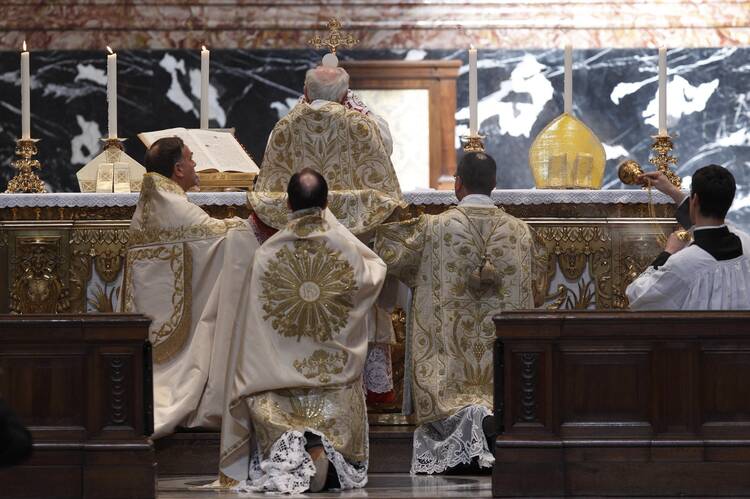 Cardinal Walter Brandmuller elevates the Eucharist during a Tridentine Mass at the Altar of the Chair in St. Peter's Basilica at the Vatican May 15, 2011. (CNS photo/Paul Haring)

When Pope Francis dropped a bombshell decree restricting the traditional Latin Mass in the Catholic Church, Anthony Ruff, O.S.B., had two immediate reactions: shock at its severity, and then heartbreak and concern for the people who attend the Mass.

“I never imagined that Pope Francis would go back that strongly to what Vatican II said and uphold it,” Father Ruff told Gloria Purvis this week on her podcast.

The liturgical analysis of the Council Fathers concluded that the form of the 1962 Missal (the “pre-Vatican II Mass”) was no longer adequate and did not reflect the nature of the true church in the modern era. Liturgical reform ensued and all Roman Catholics were urged to adopt and accept the changes. Still, a small number of Catholics remained attached to the pre-Vatican II Mass and Pope Francis’ July 2021 decree, “Traditionis Custodes,” has caused them deep pain and sadness. Father Ruff said that devotees of the traditional Latin Mass were misled by church authorities during the pontificates of John Paul II and Benedict XVI, giving the impression that a broader resurgence of Catholic traditionalism was underway. Some priests and bishops believed that the liturgical and other reforms of Vatican II could be modified or even rolled back.

Francis’ decree seeks not only to restrict the pre-Vatican II Mass, but to phase it out in a noble attempt to bring all Roman Catholics back together around the altar of the reformed Mass envisioned by Vatican II, Father Ruff said. But that could take decades, and the pain that traditional Catholics are feeling right now is real. The challenge now is a pastoral one: how to reach out, accompany and welcome the small number of pre-Vatican II Mass goers into local parishes and communities while honestly assessing the dignity of the Vatican II rite.

A Benedictine monk of Saint John’s Abbey in Collegeville, Minn., Father Ruff teaches liturgy and liturgical music and blogs at Pray Tell. He appeared this week on The Gloria Purvis Podcast. This excerpt of their interview has been edited for clarity.

Gloria Purvis: What was your reaction to this news?

Anthony Ruff: I had two reactions. First off, shock. It was stronger than I expected. I did not ever imagine that Pope Francis would go back that strongly to what Vatican II said and uphold it. My second reaction honestly was concern for the good people who are affected by it. I sensed immediately that there would be a lot of hurt and anger and sadness and desperation. And my thought is one of real compassion, and I don’t want to be condescending about that, but in a sense, we can’t blame these people. They were misled in my view. The authorities of the church let them believe that there was something O.K. and something good about the pre-Vatican II rites and gave them the impression that there would be a whole reform movement where this rite would really take off and maybe Vatican II would be modified or rolled back or even done away with.

GP:You know, that is such a strange sounding thing to me, to say a Mass is superior when our Lord is present in both. I mean, the whole purpose is for us to worship God. Because to me, when you say something is superior, it means the other thing is inferior. And I just can’t fathom that when talking about the Holy Mass, where our Lord is present.

AR: It’s a very difficult question because we don’t want to be judgmental in speaking for God and condemning others. But at the same time, you know, we don’t want to be relativists that say everything is equally good and we can’t make any judgments or we can’t analyze things.

So I think it’s really a challenge for us to talk about why the church wanted the Vatican II reforms, why the church understands the 1970 missal after Vatican II, in a sense to be superior, more faithful to the will of the Lord as understood by the Second Vatican Council. But not saying everything before it was bad. Or not saying that the people were doing anything wrong. How do we say that’s where the church was at that time. The Lord was still able to work through the old rite—lots of graces, lots of great saints, lots of valiant, Catholic Christian life.

And yet the Second Vatican Council said, the form of this [pre-Vatican II] Mass, where it’s really more clerical than congregational, that form is not adequate. We’re not saying that the people were inadequate or un-Christian, but we’re saying that that form does not reflect the nature of the true church, which is how they worded it.

GP: So I know some people are thinking: what do you mean they’re contradicting each other, that Pope Benedict did things contrary to Vatican II? Wasn’t he there at Vatican II? Didn’t he participate?

AR: I think we will be spending a long time unpacking the very rich thought of Pope Benedict. He’s a very complicated figure, misunderstood, I think by people like me who support Vatican II, and misunderstood by people who want the old Mass. He’s a very profound thinker who has an excellent grasp of what God revealed in Christ and what it means for the life of the church. I find his writings on the profundity of the Eucharist and all the sacraments spiritually very rich. But I find that something developed in him where he thought, not so much that the new liturgy of 1970 is wrong—he was enough of a theologian to accept all of it and affirm all of it. But he felt that the disruption of going from one to the other was not good for us. And he thought there was something wrong about the process and he thought something was lost there.

As I say, it’s a complicated position that I don’t claim to understand entirely. And I’m not sure all of it holds up, but there are a lot of spiritual treasures all the way through in his writings. That has to be said.

GP: So I guess what I’m sitting here thinking about, maybe struggling a bit with, all of these things are done with an idea of ecclesial unity, right? Yet from the time of when Benedict issued his letter to when Pope Francis issued his, there was a tremendous change. I would say in the United States, the rise of social media was something Benedict could not foresee. And how it has played into what I would consider creating factions and disunity and the wrong attitudes about not only the Mass, but the Holy Father!

And I feel for the people who celebrate, who go to participate in the extraordinary form and don’t have these negative attitudes toward the Holy Father or Vatican II. And they may be feeling like, why am I being penalized for the fringe? And so what do we say? I can’t imagine how much that has to just hurt.

AR: Yes, I am worried about unity in the church. Pope Francis felt he had to intervene because of some of the things you mentioned, Gloria, that Pope Benedict hadn’t foreseen. If you go to Twitter, you find out, of course, it’s gotten pretty bloody out there. These fringe people attacking the pope and attacking the new Mass and all of that. So it wasn’t working to have a peaceful coexistence, but some people who know more about it than I do, they say there are parishes where it was a peaceful coexistence and it was working.

So it’s hard to know what the mix is, but I think what’s really hard in all of this is how are we going to have a peaceful transition where the entire Roman rite does accept the Vatican II Mass. And this is a case where Pope Francis, I think does, well if not contradict, he certainly goes in a different direction than Pope Benedict. He speaks of the entire church returning to the 1970 Mass. He really does speak of phasing out pre-Vatican to Mass. And here I have to say, I don’t envy bishops who have to guide this. I think all of us have to think long and hard about how to do that. I think progress might have to be very slow.