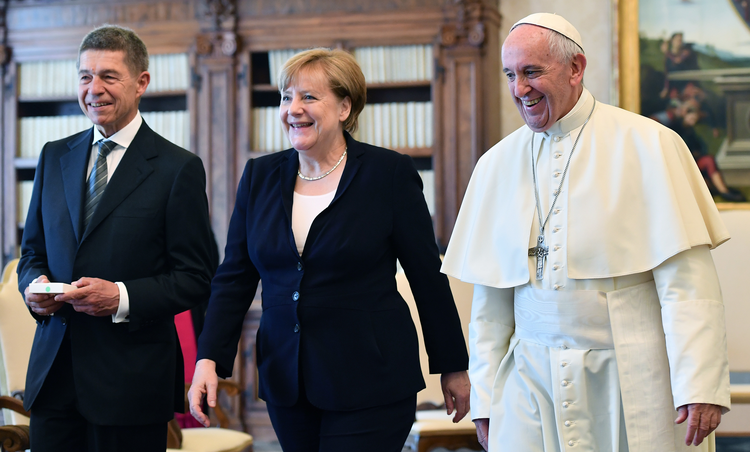 Pope Francis smiles with German Chancellor Angela Merkel and her husband Joachim Sauer, left, on the occasion of their private audience, at the Vatican, Saturday, June 17, 2017. (Ettore Ferrari/Pool Photo via AP)

Pope Francis and German Chancellor Angela Merkel met for the sixth time at the Vatican today, June 17. They agreed on the need to counteract several of the major problems facing the world today: poverty, hunger, the global threat of terrorism and climate change.

The two leaders have a very friendly and close relationship. This was evident from the first moment they met when she thanked him “for permitting me to be here again” and during the exchange of gifts in front of the press after their 40-minute conversation behind closed doors in the pope’s library. It was their fourth private meeting.

The two leaders have a very friendly and close relationship.

After her meeting with the pope and afterward with the secretary of state, Cardinal Pietro Parolin, and the secretary for relations with states, Archbishop Paul Gallagher, the Vatican issued a statement on the topics of their discussion, and Ms. Merkel also spoke to the press about her conversation with Francis.

The Vatican statement revealed in some detail what the pope and chancellor had discussed. It said, “they spoke about questions of common interest, with particular consideration given to the upcoming meeting of the G-20 in Hamburg, and they agreed on the need to dedicate special attention to the responsibility of the international community towards counteracting poverty and hunger, the global threat of terrorism, and climate change.”

Ms. Merkel is likely to emphasize that global responsibility when she presides over the G-20 meeting, July 7 to 8. The meeting will bring together heads of state or government from 19 countries and the European Union, representing 80 percent of the world’s G.D.P. and two-thirds of its population. The German presidency chose the theme for the meeting: “Shaping an interconnected world.” The topics on its agenda include economic and financial issues, climate, trade, employment and development policy, as well as migration and refugee flows and counterterrorism.

Speaking to the press after her meetings with the pope and subsequently, with Cardinal Parolin and Archbishop Gallagher, the chancellor said Pope Francis had encouraged her to work to uphold the 2015 Paris agreement on combatting climate change, even though the United States is “regrettably” leaving the accord. After the recent G-7 meeting in Taormina, Sicily, Ms. Merkel expressed her frustration at President Trump’s failure to affirm the United States’ commitment to the Paris accord, and when he followed up by announcing that the United States would leave the accord, she did not mince her words. She called his decision “deeply regrettable, and by that I am really measuring myself.” She then told reporters: “We need this Paris accord to preserve our creation. Nothing can and will stop us.”

Pope Francis has made no secret of his high esteem for Ms. Merkel.

Pope Francis has made no secret of his high esteem for Ms. Merkel, the daughter of a Lutheran pastor, who has been German chancellor since 2005 and seems likely to remain in that post after the country’s federal elections on Sept. 24. Widely recognized as the most powerful political figure in Europe, she is one of the most influential political leaders in the world today. The pope, who speaks German after living some months in Germany, and the chancellor appear to be on the same page on the main problems facing humanity today.

During their meeting this morning, the Vatican said, the pope and the chancellor recalled “the tireless efforts” of the late German Chancellor Helmut Kohl “toward the reunification of Germany and the unity of Europe.” Mr. Kohl, whom Francis praised as “a great statesman and convinced European,” died on June 16 at the age of 87.

The Editors: Let's use civic engagement to address climate change
The Editors

The Vatican said, the two leaders also spoke about “the good relations and fruitful collaboration between the Holy See and Germany.”

At the end of their conversation, the chancellor, who was accompanied by her husband, gave Francis a gift of his favorite Argentinian sweets, dulce de leche and alfajores, saying with a big smile, “You know these!” She also presented him with a set of compact discs of the works of Ludwig van Beethoven.

During the friendly exchange of gifts, Francis gave Ms. Merkel copies of his three main documents in a German translation: “The Joy of the Gospel,” “The Joy of Love” and his encyclical “Laudato Si’: on the care of our common home.” He also gave her a bronze sculpture, representing an olive branch of peace.

The pope was praising someone who has approved the use of dirty coal for energy production in Germany.

I wondered if they discussed the lack of children in Germany. An interesting coincidence is that the leaders of the United Kingdom, France, Germany, Italy, Netherlands, Sweden and the president of the European Congress have something in common. None of them have children. These are the leaders of Europe.

Did they also discuss that the increased CO2 emissions has expanded the earth's food growing regions in the last 50 years and that food production from free market capitalism and this increased growing area is at an all time high. The earth is getting greener and poverty and starvation is less. In the US and many other parts of the world the problem is obesity not starvation. This deprives the Democratic party in the US of one of its false memes that it has traditionally used to scare people.

Or that the United States (the bad boy of climate change) has decreased it carbon emissions in the last few years as Germany has increased theirs.

The regrets are probably that the United States has managed to reduce its carbon emissions as it has cut its energy cost dramatically. Germany produces energy at twice the cost of the US which is why Ms. Merkel is upset It will affect Germany's economy negatively.