James Martin on Daniel Berrigan: A Jesuit for the long haul 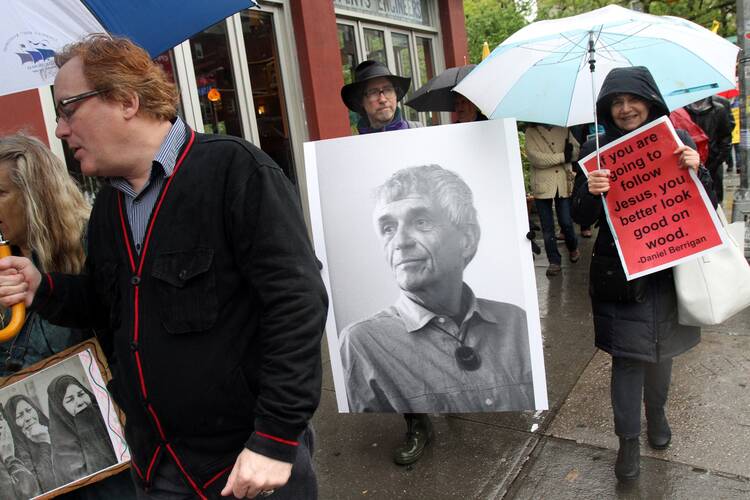 Mourners participate in a peace march May 6, 2016 prior to the funeral Mass of Jesuit Father Daniel Berrigan at the Church of St. Francis Xavier in the Greenwich Village neighborhood of New York City. Father Berrigan, a peace and social justice activist, died April 30 at age 94. (CNS photo/Gregory A. Shemitz)

America asked several authors to consider the life of Daniel Berrigan, S.J., on the fifth anniversary of his death. James Martin, S.J., is the author of, most recently, Learning to Pray: A Guide for Everyone. You can read other contributions here.

Dan Berrigan was always a presence in my Jesuit life, which began in the late 1980s. In those days, all the Jesuits in formation knew of his work on behalf of social justice, even if not all of us knew him personally. I read about Dan in the novitiate, and later came upon his books as I moved through my formation, being particularly taken with his autobiography, To Dwell in Peace, and his writings on figures from the Old Testament, like Job, Isaiah and Ezekiel. His voice always captivated me: clear, distinct, quirky, oblique, poetic.

Dan may have been a “radical,” but he was also a man committed to his Jesuit vows.

But I didn’t come to know him personally until I moved to New York City to begin my work with America magazine in 1998. After that, Dan became more of a presence in my life, and from time to time I visited his Jesuit community in Manhattan and saw his surprisingly cluttered room,with cartoons, protest posters and newspaper clippings covering seemingly every inch of the walls.

Even so, I can’t say I knew him well. But from time to time I would turn to him for advice.

A few years into my time at America, I wrote a book on the saints, and needed some advice. My Jesuit provincial superior was concerned about something controversial that was included in the original manuscript, about L.G.B.T. people. So he asked me to delete it. I agreed, of course; all Jesuits must seek permission for any books that they publish and I had taken a vow of obedience, after all. But I wanted some perspective on the experience, a bit of spiritual advice on how to move forward with peace.

So I turned to two of the Jesuits I most admired and who I thought would probably have different perspectives: Avery Dulles, S.J. (then just a few years a cardinal) and Dan.

Avery read what I wrote and wrote me a letter saying that it certainly wasn’t against “faith or morals,” but that of course I needed to follow what the provincial requested and, moreover, see it as God’s will. Just so there wouldn’t be any doubt about what he thought, he told me, he would also endorse the book. “After all,” he told me in a later phone call in his gravelly voice, “I’ve already read it. I might as well endorse it!” Avery was nothing if not efficient.

There he was: a Jesuit priest surrounded by the wood of the casket.

I expected Dan to say something more in the line of lament or even protest or resistance. Which shows how little I understood him at the time. Instead he wrote a note, counseling me to remember that I was “in this for the long haul,” and, as Avery suggested, see the provincial’s decision as God’s will. Dan also told me that Thomas Merton had said something similar to him when faced with a similar situation. I’ve always remembered that expression— “the long haul”—and have shared it with younger Jesuits who are struggling with their vocations. Live your life in a way that makes sense for the long haul. Later on, as Dan grew ill, I heard from his close friends how precious his Jesuit vocation had always been to him.

It all fit. And it was at odds with the public perception of him as “disobedient.” Dan may have been a “radical,” but he was also a man committed to his Jesuit vows, at least as far as I could see.

Celebrating the Eucharist with Daniel Berrigan: ‘A Communion I will never forget’
Jim Forest

When I saw Dan lying in his casket the night before his funeral at St. Francis Xavier Church in New York City, I was shocked. He was dressed in his priestly vestments: alb, stole and chasuble. That wasn’t a surprise, since all priests are dressed like that for their funeral. Rather, since I had spent so little time with him, usually over meals, I had never seen him vested for Mass. There he was: a Jesuit priest surrounded by the wood of the casket.

I remembered Merton’s line about the monastery being the “four walls of my freedom.” And I remembered Dan’s words to me, and was so grateful that he had been in it for the long haul.