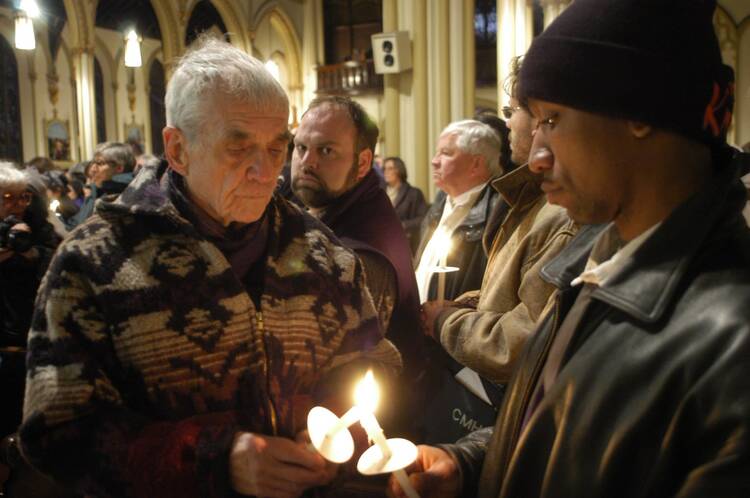 Daniel Berrigan, S.J., lights a candle during a prayer service for peace at Holy Name Church in New York on Jan. 20, 2003. (CNS photo by Chris Sheridan)

America asked several authors to consider the life of Daniel Berrigan, S.J., on the fifth anniversary of his death. Helen Prejean, C.S.J., is the author of Dead Man Walking, The Death of Innocents and River of Fire. You can read other contributions here.

Daniel Berrigan, S.J., was one of the first people to truly inspire me when I first began to wake up to the reality that justice was an integral part of the Gospel of Jesus—that it was not just being charitable to people, and that my prayer needed to be more than simply asking God to comfort the poor and suffering people of the world.

I joined the Sisters of St. Joseph in New Orleans in 1957 and began to teach in the 1960s. Then the Second Vatican Council began in 1962. We nuns, who had always been in the institutions of the church—teaching, nursing—found that it just kind of opened up the world. We had Pope John XXIII saying: “Read the signs of the times.” And then you had Simon and Garfunkel singing: “The words of the prophets are written on the subway walls.”

Daniel Berrigan, S.J., was one of the first people to truly inspire me when I first began to wake up to the reality that justice was an integral part of the Gospel of Jesus

Then I heard about a Jesuit priest not only being brought to trial for breaking the law but putting the government on trial—for nuclear weapons, for the whole approach of the military and for the Vietnam War. It shocked the willies out of me. First, that people would break the law—each of us is always in our little cocoon of understanding—and then that real prophetic action might involve breaking the law and going to jail.

In my own journey— which I’ve just written about in River of Fire, on becoming an activist—I talk about Dan and Philip Berrigan, and the role that they played in helping to wake me up. They are two people that showed me the difference between cheap grace and costly grace that Dietrich Bonhoeffer wrote about in The Cost of Discipleship. Costly grace is when following God’s call is going to cost you: for example, being arrested and going to prison. Cheap grace doesn’t cost you anything personally. This spoke to me because I had never paid any kind of price for anything. I had never even dreamed that maybe a law of the United States might be against God’s law—at least not until I saw examples like Dan and Phil Berrigan. You could just see the soundness of what they were saying.

I had never even dreamed that maybe a law of the United States might be against God’s law—at least not until I saw examples like Dan and Phil Berrigan.

Bump down a whole number of years, and we got to be friends. He was just so human. We would sit down, he would open up a little wooden folding chair—that was our coffee table—and we would sit around and have a glass of wine and talk. He loved my Cajun jokes! Whenever we were together, he would ask: “You got another Boudreaux and Thibodeaux for me?” He had such a hearty laugh.

And we would talk about things that matter: the work I was in; the work he would always be in for the Gospel and for peace; how things get veiled and presented as good. I was, of course, discovering all kinds of stuff about the death penalty as well. And I was going right into the fiery furnace of witnessing executions.

Celebrating the Eucharist with Daniel Berrigan: ‘A Communion I will never forget’
Jim Forest

James Martin on Daniel Berrigan: A Jesuit for the long haul
James Martin, S.J.
Dan in his own way, too, had been in the fire, going to prison. One of the last visits I had with him was when he was over at Fordham University in the Jesuit retirement home. I happened to be there at happy hour. We had a great conversation. I looked down and there was a picture of his mother visiting him in prison. He had kept that picture of the two sons with their mother when she had come to see them in prison.

Dan Berrigan, S.J, loved my Cajun jokes! Whenever we were together, he would ask: “You got another Boudreaux and Thibodeaux for me?”

Dan always set his eye on the true questions: “Are you doing the Gospel? Are you standing up for the suffering? Instead of going along with the powers that be, are you standing up for peace and against oppressive systems?” But he did it in such a human, loving way. Sometimes people can work for justice and they become so doggone serious that it is kind of heavy to be with them. It was never heavy to be with Dan.

He was such a strong intellect and a poet. He had a way with words; after his arrest at Catonsville, he wrote, “Our apologies, good friends, for the fracture of good order, the burning of paper instead of children, the angering of the orderlies in the front parlor of the charnel house. We could not, so help us God, do otherwise.”

I think Dan would love what Pope Francis says about what it means to be followers of Jesus. We need the church to be a field hospital: out where the wounded are.

Helen Prejean, C.S.J., is the author of Dead Man Walking, The Death of Innocents and River of Fire.

@helenprejean
Show Comments ()
Join the conversation: Login or create an account
Before you can comment, you need to update your profile to include your first and last name, as required in our comments policy. Then reload this page and you'll be set up for commenting. Update your profile