I never met Daniel Berrigan. But he showed me as a young Catholic a different way to live out my faith. 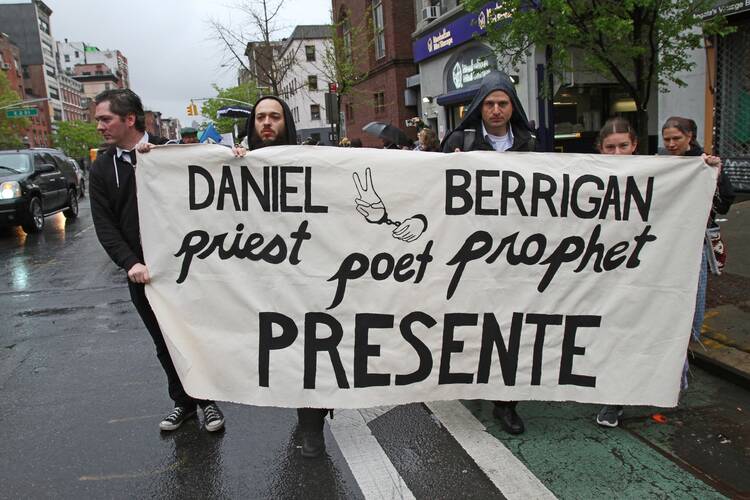 A peace march preceded the funeral of Daniel Berrigan, S.J., on May 6, 2016, at St. Francis Xavier Church in Manhattan. (CNS photo/Gregory A. Shemitz)

America asked several authors to consider the life of Daniel Berrigan, S.J., on the fifth anniversary of his death. Colleen Dulle is assistant producer of audio and video at America. You can read other contributions here.

I never met Daniel Berrigan, S.J. Nevertheless, he has had a profound influence on the direction of my own life and on my convictions.

I was in an editorial meeting with the staff of my college newspaper at Loyola University New Orleans in 2016 when I got a push notification from The New York Times. “Remembering Daniel Berrigan: A Penniless, Powerful Voice for Peace” identified Father Berrigan as a “Jesuit priest, poet, anti-war activist.” It had never occurred to me that those descriptors could all be applied to a single person. I was immediately drawn in.

At the time, I was experiencing somewhat of a crisis of faith, and reading about his life turned a light on. It showed me that there was an entirely different kind of Catholicism from the world of lofty theology, one that was focused on making a difference on the ground. And for people who are focused on the concrete day-to-day action, the theological questions sometimes find their answers in the work. That gave me a new way into my faith. I remember hearing the verse from the Book of Wisdom, that the godly and the just “shall shine and dart about as sparks through stubble.” That was Dan Berrigan, I thought.

I developed a hunger to learn more: “Who else like Dan Berrigan is out there?” I assigned myself stories at the paper that allowed me to explore social justice issues. One featured a cemetery protest against cutting Medicare led by Fred Kammer, S.J., still probably the most prophetic Catholic action I have witnessed. I interviewed Kate Hennessy after her book on her grandmother, Dorothy Day, was published. I started spending time at the Catholic Worker house in New Orleans. I started going to Pax Christi protests. A door had been opened.

I remember hearing the verse from the Book of Wisdom, that the godly and the just “shall shine and dart about as sparks through stubble.” That was Dan Berrigan, I thought.

After graduation, I found myself working on climate and justice stories for Catholic News Service in Washington. After I moved to New York and began working at America, I started spending my free time at Maryhouse, sort of the Mecca of the Catholic Worker world, getting to know today’s prophets.

A year later, the stories about former Cardinal Theodore McCarrick’s abuse of children and seminarians came out, along with Archbishop Vigano’s accusations that Pope Francis and many others had known of McCarrick’s crimes and done nothing. It was a difficult time to be a Catholic, and even more difficult to be a Catholic reporter; we were inundated daily with stories of sex abuse, financial malfeasance and corruption. I think one of the major factors in keeping me sane (and Catholic) through those terrible months in 2018 was the witness of the Catholic activists I had come to know.

Paul Elie: Daniel Berrigan was a fierce critic of the United States. He was also a great American.
Paul Elie

I still go back and listen to the homily from Dan’s funeral, by Steve Kelly, S.J., another prophet of nonviolence. I still talk about it with people like Martha Hennessy and Billy Critchley-Menor, S.J., activists who reference Dan’s funeral as a moment that strengthened their resolve and provided an impetus that led them to acts of civil disobedience. Martha, in fact, is scheduled to be released from prison next week after serving time for her participation in the “Kings Bay Plowshares” protest against America’s continuing nuclear weapons program, an action she was inspired to take after hearing Father Steve speak at the funeral.

“When he gave that incredible homily, it immediately called to me,” she told me in a 2019 interview. “I knew my mind and heart at that time and place that I needed to take direct action to call for [nuclear disarmament].”

She is in this for the long haul. So am I, if maybe in different ways. And I have Daniel Berrigan, S.J., to thank for it.