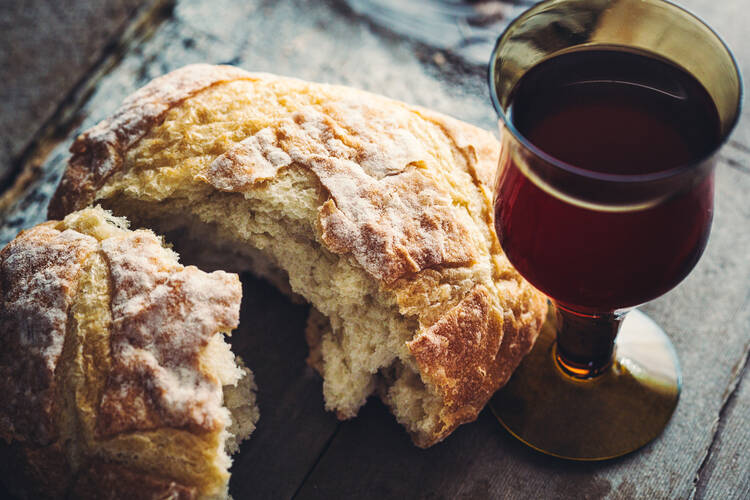 This is the seventh article in a seven-part Lenten series on the station churches of Rome. Read Part I; Part II; Part III; Part IV; Part V; Part VI.

After chilly St. Balbina’s, the most obscure church on Rome’s station itinerary is probably St. John Inside the Latin Gate, nestling next to the city’s ancient walls. The walk there is like cutting through a fairy tale forest—a road hemmed in with weathered walls, gnarled vines spewing down their sides, a web of branches overhead. Occasionally a stone with a shadow of Latin still visible is mixed in with the brick. The ruins of Caracalla’s baths and the Circus Maximus are far behind; this was the periphery of the imperial city. Today the walls hide diplomatic residences and a few discrete estates.

They also hide a little pathway leading to St. John’s. The bend opens onto a flagstone square, and the wrought-iron gate protecting the church has just been unlocked. Two columns that no doubt once held a chain and bucket stand on either side of a marble well, carved with swirling stars and the words In Nomine Patris et Filii et Spiritus Sancti in uneven letters dancing around its rim. The church marks the spot where, according to legend, the Emperor Domitian attempted to kill John the Evangelist by boiling him in oil. Much to Domitian’s chagrin, the murderous liquid did the saint no more harm than a bubble bath. The emperor packed John off to Patmos, where he wrote the book of Revelation. Across the street an octagonal chapel marks the spot John’s ineffectual executioners set up their cauldron.

Pilgrimage is made up of moments such as these—discrete graces that add up when you are not keeping track.

Needless to say, the truth of Christianity does not rise or fall with this story. In fact, I really see no theological principle at stake in the tale at all. But there is a delightful stained glass window of the scene in the sacristy; the saint looks like an extremely pious toddler stepping into the tub—he even wears what seems to be a diaper—while all around him Domitian’s goons futilely shovel logs onto the flames. Their expressions are indignant, almost pouty.

Only a hardy few of those who started out at Santa Sabina on Ash Wednesday make it to St. John Inside the Latin Gate, and the snug church has perhaps the most intimate feel of the whole season. The sun is up earlier now and the windows behind the altar are yellow onyx; a honey-colored light fills the sanctuary. Just below the wooden rafters a cycle of frescoes, faded but still visible, tell the story of Eve’s folly and Mary’s response; scraps of both Latin and Greek appear in the Cosmatesque floor; the columns are hand-me-down, too, each one slightly different from its neighbor; the ambo is a repurposed roof tile dating from the reign of Theodoric the Ostrogoth.

After Mass I chat with a priest from Ohio I had met three weeks ago at St. Lawrence Outside the Walls. It was a Sunday, so there was no regularly scheduled English Mass that day, but we both showed up at about the same time in the afternoon and after our visit waited together in the rain for not one but two buses to fail to arrive, swapping stories of Rome’s inefficiencies. When a bus finally did arrive—packed and smelling of damp shoes—he sighed, “Some days, Italy wins.”

Outside St. John’s, Italy seems on our side again. A post-Mass cappuccino and cornetto will soon complete the ritual, and we have a beautiful spring Saturday ahead. The pilgrimage is made up of moments such as these, more than a single insight or dramatic event, discrete graces that add up when you are not keeping track.

Pilgrimage means conversion, but conversions are rarely instantaneous. Even after we have arrived at the destination, the journey home awaits us, then other journeys after that, until we leave these earthbound roads behind. Consider Chaucer’s merry band on their way to Canterbury; the collection itself remains a work unfinished. As, I suppose, does your own pilgrim-raconteur.

If there is a common theme to unite the scattered destinations of these 40 days, it is perhaps the importance of the details that add up: chance conversations, hidden mosaics, stories handed on for ages. The legend of St. John’s cauldron may not quite fit the rigid canons of modern scholarship—I would not die a martyr for its truthfulness—but telling such stories is important. Tall tales make pilgrims smile when our feet hurt from the journey.

Tall tales make pilgrims smile when our feet hurt from the journey.

So does noticing the dirty feet on Caravaggio’s elderly pilgrims in St. Augustine’s. Or the vines that rise from potted plants in the mosaics of St. Praxedes. Or running into another Jesuit on my way into the sacristy of the Twelve Holy Apostles. The location is amusing because over the door of that particular sacristy is the tomb of Clement XIV—the pope who suppressed the Jesuits in 1773. His portentous marble arm is raised like Darth Vader’s, as if he’s still trying to swat us. “We’re back,” I whisper as we pass underneath. “For now,” grumbles the voice of James Earl Jones.

Relics, chapels, statues, frescoes, legends and pilgrimages all arise out of a sacramental sensibility, which in turn arises from the still jarring fact that God became man. Not the Force, not nature, not a book or a neatly defined set of principles, not even humanity in general but a very specific person at a very specific time in a very specific place. None of us is an abstraction, either, but rather bundles of our own peculiarities. I prefer the chocolate-filled cornetto to the jelly one and cannot tell you the reason why. It is just the way I am.

The sacraments, too, are made up of such specifics—bread, wine, oil—reflecting the accidents of geography and culture that made Jesus the specific man he was. Those taught with the Baltimore Catechism may have memorized the scholastic definition of a sacrament: “An outward sign instituted by Christ to give grace.” True enough, though one of the founding fathers of Rome’s station liturgy, Leo the Great, put it in a way I like a bit more. In a homily for the Feast of the Ascension in 445, Leo told his Roman flock that what was visible in Jesus has passed over into his sacraments. In the sacraments, the incarnation becomes incarnate for us, too.

In the sacraments, the incarnation becomes incarnate for us, too.

Understand that—or better still, feel it—and you will understand how bread and wine could matter so absolutely; why pilgrims risk blisters walking when they could fly there faster; why it is worth rolling out of bed early to taste the frost in St. Balbina’s. Catholicism has a rich and wonderful intellectual tradition and our philosophers can go toe-to-toe with the best of them, but nothing has or ever could replace the specificity of the sacraments. Couldn’t it be apple juice instead of wine? Isn’t it the principle that matters? It could, of course, but then we would lose everything.

On Holy Thursday, Lent’s purple vestments are packed away. I am back at St. Peter’s for the Chrism Mass presided over by the Holy Father. It is hard to outdo a papal Mass in St. Peter’s for grandeur, but I am thinking about something I noticed when I was here for the station Mass five weeks ago, early in the morning when the basilica was quiet and uncrowded.

Bernini’s baldacchino, the 10-story high canopy rising on undulating bronze columns over the main altar, is the world’s largest bronze sculpture; when it was built, it was taller than any building in the city other than the basilica itself. The baldacchino is covered with gilded bees, symbol of the Barberini family; sun rays that symbolize the Holy Spirit; warrior seraphs; cherubs toying with the papal tiara and keys; and the laurel leaves of poetic triumph. A series of marble reliefs around its base depict a complex allegory involving childbirth, the interpretation of which perplexes scholars to this day. It stands directly under Michelangelo’s dome and directly over the tomb of the Apostle Peter, whose successor happens to be saying Mass underneath it at this moment.

But on that much quieter morning, passing around the column on the far left side, I noticed something else: a rosary attached to a couple of pious medals, beads dangling over the edge of the base of the column as if the sacristan had left them there by accident. But the beads are part of the gilded bronze sculpture; Bernini had left them there, and they were no accident at all.

The baldacchino inside St. Peter’s Basilica contains over 13,000 pounds of sculpted metal. But those beads contain the mystery.

Editors’ note: This is the first article in a seven-part Lenten series on the station churches of Rome. Sign up for our America Today newsletter to receive a new article each Tuesday during Lent.