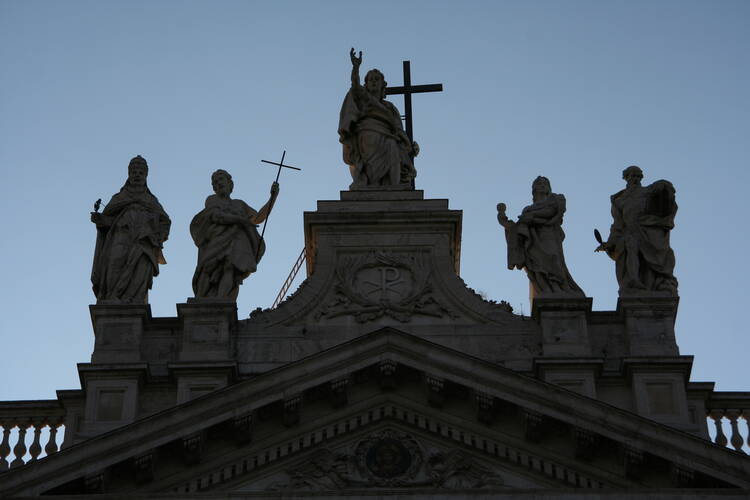 This is the second article in a seven-part Lenten series on the station churches of Rome. Part I; Part II.

The confessors at St. John Lateran are among Rome’s friendliest, so that is where I am heading this first Sunday of Lent. Since the softies usually dish out no more than three to six Hail Marys, I plan to head across the street afterward and get in some real first-Sunday-of-Lent-worthy penance at the Holy Stairs.

As relics go, the Scala Sancta has won me over. I suppose I am inclined by temperament and culture to look with an arched eyebrow upon the medieval artifacts with which Italy is so replete. On his journey down the peninsula, Mark Twain complained of having seen enough nails from the true cross to fill a keg. It should not surprise, therefore, that doubts have been raised about the provenance of the Holy Stairs.

These particular stairs are holy because they once led up to Jerusalem’s praetorium and were thus the stairs Jesus climbed to stand trial before Pontius Pilate. They were packed up and shipped from Palestine to Rome by the Empress Helena, Constantine’s devout mother and as determined a souvenir hunter as there ever was.

I found myself imagining Jesus’ feet on those stairs two millennia before—what he would have felt as he was jostled up by Pilate’s guards.

Before my visit, I ask another Jesuit, an officially registered guide with an aptitude for things scientific, about the Holy Stairs. The doubts, he explains, had to do with the type of marble with which the stairs are made: It is Italian, not Middle Eastern. But then he adds with a twinkle in his eye, more recent research has shown that the Romans had the habit of constructing civic buildings in the far reaches of their empire from materials imported from the fatherland—a none-too-subtle way of reminding conquered subjects on whose soil they now stood. The stairs were an obvious mark for Helena and, unlike nails, hard to duplicate. With unlimited access to the imperial credit card, she would have had no problem acquiring her stairs and sending them gift-wrapped back to Rome. Her son built Constantinople. These people were not coupon-clippers.

But my attachment to the Holy Stairs comes from personal experience, not archeological conjecture. A few days before my ordination as a deacon, I had also gotten up early and trekked to St. John Lateran for confession. Since it was a special occasion, I decided to give the Holy Stairs a try afterward. Climbing the 28 stairs is considered penitential because by tradition you can only go up them on your knees. My attitude at the time was, I admit, more tourist than pilgrim: Might as well give it a try, I figured. I could scratch the stairs off my Roman to-do list and still have time for a cappuccino afterward.

What I hadn’t figured on when my knees hit the walnut—the stairs are marble but covered with a protective layer of wood—was ending up behind a saint. Or perhaps a reformed ex-serial killer determined to expunge every single past sin then and there on the stairs and empty purgatory in the process. The point is, the woman ahead of me was moving very, very slowly, and, not knowing the etiquette for passing in such a situation, I soon found myself trapped in the slow lane. So, since there was not much else to do, I began to pray.

I found myself imagining Jesus’ feet on those stairs two millennia before—what he would have felt as he was jostled up by Pilate’s guards; then led down; then up again, this time lashed and bleeding. I wondered what poor servant had to mop the blood up off the Italian marble. And I imagined his final journey down the stairs—the sentence passed, his flesh already flayed, tired, weak and hungry, the derision of a hostile mob all he had to look forward to before bleeding out in the cold spring air.

Something about the physical discomfort helped me to focus on the much greater pain Jesus had felt on those same stairs.

Before long I had tears in my eyes—and not from the uneven grooves worn into the wood by pilgrims’ knees. Something about the physical discomfort, in fact, helped me to focus on the much greater pain Jesus had felt on those same stairs. And soon enough I was no longer trying to shimmy my way around the woman ahead of me. I wanted to be there, with him, even if my knees ached. Soon I was remembering people who had asked for prayers and some who had not and the different ways they were suffering—cancer, an eating disorder, a spouse’s loss. They were there, too, somehow, on the stairs where Jesus bled.

The Holy Stairs were closed. A sign assured me I could still get the attached indulgence on the modern staircase next to them, an addition usually used for walking down when finished but which during the renovation maintained a lane reserved for kneeling up.

Martin Luther had lumbered up the stairs on his knees in 1510, rather more concerned with the indulgence than I was, only to get to the top and comment, “Who knows if this is true?” The ill-tempered Augustinian had unfortunately missed the point. My first trip up the stairs had not moved me because of an expected reward at the end but because of who I realized was with me on the journey. I was on those stairs with the Lord, along with a millennium and a half of pilgrims.

Sacramentality requires acknowledging that although sometimes “it’s the thought that counts,” other times reality counts more.

And that meant the detour would not be quite the same. Sure, my knees would have hurt just as much—maybe more—on the modern marble as on the rutted wood, and I could have prayed just as hard. But St. Helena could have built a to-scale reconstruction of Jerusalem’s praetorium in Rome as well; instead, she wanted the stairs that touched Christ’s feet.

It is difficult to explain precisely why that would be the case, especially when the experience is reduced to the bottom line of getting my indulgence by whatever means. The word that comes closest to an explanation is sacramental, but it is a word that expresses a sensibility as much as a concept. And it is a sensibility all the harder to appreciate in a world in which so much of reality has been replaced with virtual reality.

What Lenten pilgrims can learn from the martyrs of Rome
Anthony R. Lusvardi, S.J.

Sacramentality requires acknowledging that although sometimes “it’s the thought that counts,” other times reality counts more. Concrete, specific, physical reality matters because we ourselves are concrete and physical, our lives mosaics of uncountable specifics. Understanding friendship in principle is not the same as having friends; and if those friends can simply be substituted with other people of roughly similar description, then they were probably not friends to begin with. Something unquantifiable makes them who they are.

The veneration of relics—though somewhere between creepy and ridiculous to Mark Twain’s WASPish sensibilities—acknowledges the sacramental in our lives. Telling stories about martyrs helps to keep their memory alive, but the first Christians wanted to hold on to more than just biographies. Gathering up the martyrs’ bones, then visiting those scraps of physicality, they acknowledged that something about their departed friends could not be reduced to our idea of them. Pilgrimage requires us to walk because being there is always more than thinking about being there.

Of course, sacramentality also means that in this life we never really escape the limits of time and space, of bungled logistics and bodily decay. Sometimes the pilgrim site is closed for restauro, and the morning does not work out quite as planned. But grace has chosen to dwell within those limits and even to use those limits—to catch us, for example, in a traffic jam on the Holy Stairs.

Editors’ note: This is the third article in a seven-part Lenten series on the station churches of Rome. Sign up for our America Today newsletter to receive a new article each Tuesday during Lent.

I loved the style in which you have written this article. Do check the detail information of SRMJEEE 2020

Much, if not all, of the pious knowledge of the fourth century, from Jerome's reasoning on the Holy Family to the discovery of the true coss and the stairs, would not pass the smell test today. This does not make them any less useful in achieving mindfulness, as Dr. Anthony demonstrates. We must cast a more critical eye, however, at those that are cured in defense of pietistic morality, especially when the myth cited has to do with sexuality and who can be ordained. Here I trust my cousin Sam more than Helen, Augustine, Jerome and especially Anselm.