During Lent, we need both penance and beauty 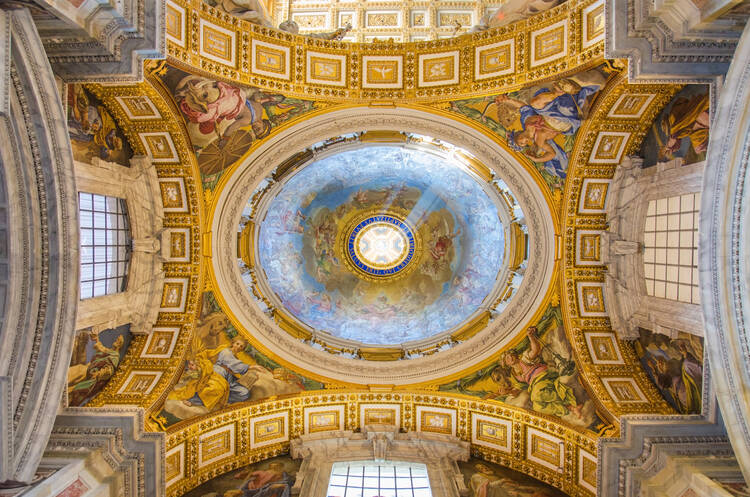 This is the fifth article in a seven-part Lenten series on the station churches of Rome. Part I; Part II; Part III; Part IV.

At St. Peter in Chains, I squeeze into a seat that will give me a view of Michelangelo’s “Moses” during Mass. Like so many of Michelangelo’s seated figures, Moses would be a terrifying giant if he stood up. His limbs are weathered, lean and muscular, his clothes worn almost to tatters by the desert journey; his massive hands, those of a stonemason or a carpenter, play absentmindedly through a gnarled beard. But it is his glance that commands, a fusion of age and force, a steely determination to stay the course forged by 40 years of trial in the wilderness.

A larger Michelangelo creation—the dome of the other St. Peter’s—comes up twice on the Lenten stational itinerary. The art historian Elizabeth Lev points out that Michelangelo’s singular innovation—reworking Bramante’s original design for the basilica—was to set the dome atop a ring of four-story-tall windows so that the great hemisphere would seem to rest on the sun’s incoming rays. The sculptor carved this masterpiece in light and space.

Catholicism has always found room for both Michelangelo and Mother Teresa.

Walking home from St. Peter’s in the crisp spring air, I cannot help but feel a little spoiled. My Lenten pilgrimage has been more art and beauty than hair shirts and flagellation. It is not just St. Peter’s. In Sts. Cosmas and Damian, a rare Christian building to encroach on the Roman Forum, mosaics above the altar ripple with color. The floor of St. John Lateran, whorls and checkerboards and curlicues of red and green and amber twisting up the nave like an M.C. Escher staircase, is more opulent than any Persian carpet.

I suppose there is a line of thought in Christianity that would equate the cheap and mean with holiness, but somehow Catholicism has always found room for both Michelangelo and Mother Teresa. The men staying at the Missionaries of Charity’s homeless shelter on the Caelian Hill, in fact, have the best view in the city of Rome’s domes and the Palatine’s umbrella pines.

But there is something more than that—more than Catholicism being a big tent with room for different sensibilities—that holds beauty and penance together in one faith. Lent is a pilgrimage that leads somewhere, just as the souls making their way up Dante’s Mount Purgatory are all in transit. Penance is not an end in itself, and the mild hardships involved in visiting the full round of station churches—rolling out of bed a bit earlier than usual, occasionally forgoing breakfast, trotting at a good clip across the city—make the radiant moments possible. Sky and earth converge inside St. Peter’s dome for only a few moments each morning before the hordes start elbowing for selfie space in front of the “Pietà.”

Michelangelo believed his work as artist meant finding and freeing the sculpture latent in the marble, and penance works the same way.

Michelangelo believed his work as artist meant finding and freeing the sculpture latent in the marble, and penance works the same way. Our excess is chipped and polished away so that something truer can emerge. The underlying Christian vision is profoundly positive: Our baptism plants within us something more beautiful than what appears on the surface.

Getting to that beauty requires hope, believing in what is not yet seen and having the courage to take up mallet and chisel. Being a Christian, therefore, requires something of an artist’s vision of human life. Catholicism’s remarkable intellectual tradition notwithstanding, Christianity’s philosophers and theologians will always require an assist from the likes of Michelangelo, Dante and John of Patmos.

Christ returns on an apocalyptic cloud of orange and red in the apse mosaic of Sts. Cosmas and Damian; around him stand a half-circle of Roman saints, their eyes bright round orbs against an indigo night sky. Gaping eyes are something of a convention in early Christian art, swollen beyond all human proportion by the power of the vision they have seen. These eyes have the dual purpose of bearing witness and of drawing the observer in. There is a warning in those eyes, too, something haunting, because after glancing at what lies above you will never be able to look back the way you came. They are not cute, like Raphael’s cherubs, but they are compelling.

To make it to the Promised Land we exiles need hints of the something more that lies ahead.

Perhaps our own Christian witness today would be more effective if we focused less on how to be popular and more on how to be compelling. Bright light stings. When the pilgrim Dante begins to wind his way up the mountain of Purgatory, he is at first unable to bear the sight of the angels that guard the entrance to each new terrace. Only as he nears the top, his vision cleansed through the strain of the journey, can he begin to make out more detail in their appearance.

What snowfall in Rome taught me about Lent
Anthony R. Lusvardi, S.J.

Of course, the point of “Purgatorio,” the point of going on any pilgrimage, is that we are not quite there yet. I still find myself chasing shadows that melt in the light. Poor Moses had to contend with golden calves and constant bickering, but it was the vision he was granted that kept him going. Deuteronomy says no prophet ever arose in Israel to equal Moses because he knew God face to face. Exodus adds that as a result of that vision, Moses’ own face, like the eyes of the saints in the mosaics, shone with radiance. The determination Michelangelo found in the great lawgiver came from his vision of the divine.

To make it to the Promised Land we exiles need hints of the something more that lies ahead. Lent’s penances and Michelangelo’s dome, each in their way, aim to purify our vision. I have come to realize I am still a stubbornly earthbound pilgrim, too often shading my eyes because the light of truth is hard to bear. For now, until the scales fall away and I can run instead of stumble, I need hints of that beauty that lies far, far ahead. When it comes to church architecture I’ll always prefer a hint of heaven breaking through to the purely utilitarian. I will sit where I can see “Moses.” The station churches reassure me that I am not the first wayfarer to feel this way.

Editors’ note: This is the fifth article in a seven-part Lenten series on the station churches of Rome. Sign up for our America Today newsletter to receive a new article each Tuesday during Lent.