A church built on ruins 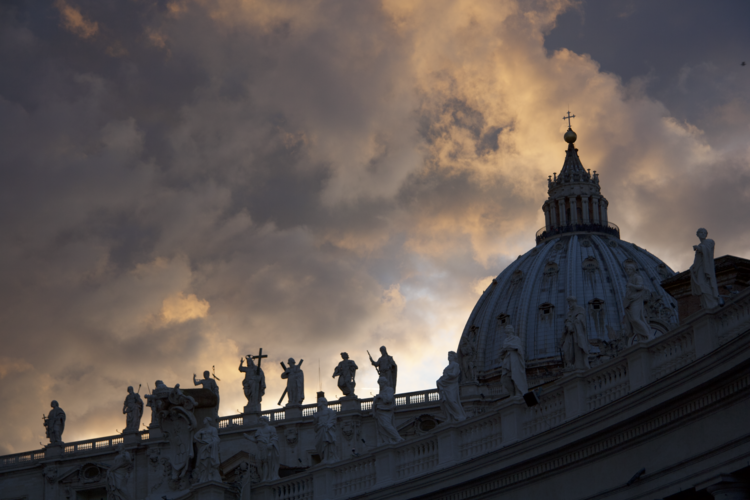 This is the fifth article in a seven-part Lenten series on the station churches of Rome. Part I; Part II; Part III; Part IV; Part V.

We are near the end of Lent, that limbo in which enthusiasm dims, resolutions fray and self-justification flourishes. Laetare Sunday’s brief flare of spring color has passed. The churches at this point on the stational itinerary take a turn for the obscure and dingy, travertine façades stained like week-old snow. St. Nicholas in Prison is in restauro, plaster peeling from the ceiling of the side chapel where we vest amid piles of boards and torn up carpeting. St. Eusebius boasts a magnificent baroque high altar, but what looks like a picnic table has been brought in to replace it. Also, I have a cold.

Addicts slump on the steps outside Sts. Sylvester and Martin. The neighborhood smells like a truck stop restroom, but inside the basilica is a marvelous medley of everything from the columns of Trajan’s Forum to tricks of baroque perspective. A painting shows Pope Sylvester responding to the Arian crisis with a Roman version of the Council of Nicaea in 324. Something about that historical moment seems to mirror this mid-Lent trough: Just when it seemed Christianity’s moment had arrived—the persecutions halted and its worship brought into the open—a crisis erupted worse than anything paganism had devised. The church swerved toward the faux-simplicity of Arianism and fractured from within. It took centuries to patch things up.

We are near the end of Lent, that limbo in which enthusiasm dims, resolutions fray and self-justification flourishes.

In reality, I am told by one of the basilica’s Carmelite caretakers, the painting shows nothing more than a clever bit of papal public relations on the part of one of Sylvester’s successors. Pope Symmachus invented the gathering to rehabilitate Sylvester, who sat out Nicaea and received its decrees only ex post facto. Symmachus’s own reign was marked by a contested election, an anti-pope and a succession of contentious synods that served only to exacerbate divisions. The artist responsible for the fresco was so stung by the criticism of its artistic merits that he never painted another work again.

The church assigned to the Friday before Holy Week is Santo Stefano Rotondo. There is nothing like a shot of martyrdom to jolt one out of spiritual torpor, and in St. Stephen’s you are literally surrounded by it. The church is cylindrical in shape, and its circular walls are frescoed with vigorously detailed scenes of martyrdom—stonings, crucifixions, dismemberments, flayings, burnings, boilings, stabbings, defenestrations. Lions devour Sts. Perpetua and Felicity, and St. Feliciano is being forced to drink lead. I will omit the gruesome ones.

This year, however, St. Stephen’s is in restauro. A new church is chosen as a substitute; in fact, the alternate church is Chiesa Nuova, which means “New Church.” It dates from the 16th century. It is also a much shorter walk, so I am happy with the substitution.

That is, until I step out onto Via del Seminario and a well-fed Roman rat claims the right of way. He swaggers through the restaurant detritus of the night before; plump haunches and a tail the color of undercooked meat disappear into a drain. For the rest of the morning I am skittish at every piece of litter shifting in the breeze. Call it cowardice if you will, but remember that Rattus rattus has yet to issue any formal apology for the species’ considerable role in the Black Plague.

There is nothing like a shot of martyrdom to jolt one out of spiritual torpor, and in St. Stephen’s you are literally surrounded by it.

Wherever humans gather in any number, there also—and especially—these prolific bottom-dwellers thrive. And humans have inhabited the hills of Rome for a long, long time. Old buildings full of crevices and a tragicomically inefficient waste disposal system make Rome a paradise for rats. A few even wear crimson.

Perhaps it is their proximity to our own species that make rats so singularly loathsome—their resilience, the crude intelligence that allows them to unexpectedly slither where they will, the grasping pink hands that seem a parody of human fingers. It may have been a snake in Eden, but I would pick the rat as mascot for human sinfulness. This parasite of urbanization seems the perfect emblem for freedom’s ugly byproduct.

During Lent, we need both penance and beauty
Anthony R. Lusvardi, S.J.

It might be a little disconcerting to realize that Rome is a-slither with rats, dining better than some people on carbonara and gelato, but the ugly creatures are hard to kill. Even under Rubens’s saints in the Chiesa Nuova, I jolt embarrassingly when I think I feel something against my leg, though it turns out just to be my alb brushing against the pew. Only on the walk home, with the rising sun painting the fountains and obelisk of Piazza Navona with a light too golden to ignore, do I manage to take my eyes off the cobblestones and forget about the rats.

On Palm Sunday, the station church itinerary returns to St. John Lateran, my preferred spot for confession, and I am about due again. I dwell for a minute with eyes downcast on the floor, which is what is known as “Cosmatesque”: It dances with marble designs. The style is named after the Cosmati, a family of medieval craftsmen who created dizzyingly beautiful pavements from Rome’s abundant supply of shattered marble.

If the rat is this Lent’s mascot for sin, perhaps the floor of St. John Lateran should be its symbol for forgiveness. Rome’s cathedral has been destroyed and rebuilt more times than I can count; earthquakes and barbarian invasions punctuated the Middle Ages; fires broke out around the time the papacy left for Avignon; it was even bombed by the Mafia in 1993.

But you only get Cosmatesque floors where there are ruins first, and no place in the world has such a talent for rebuilding what once seemed lost as Rome. Easter is almost here. O felix culpa.

Editors’ note: This is the fifth article in a seven-part Lenten series on the station churches of Rome. Sign up for our America Today newsletter to receive a new article each Tuesday during Lent.

Magazine and all documented item has been done for the comfort of the zones. The range of the hope and grademiners.com is approached for the humans. The management is fixed for the appropriation of the facts for the citizens.