What Lenten pilgrims can learn from the martyrs of Rome 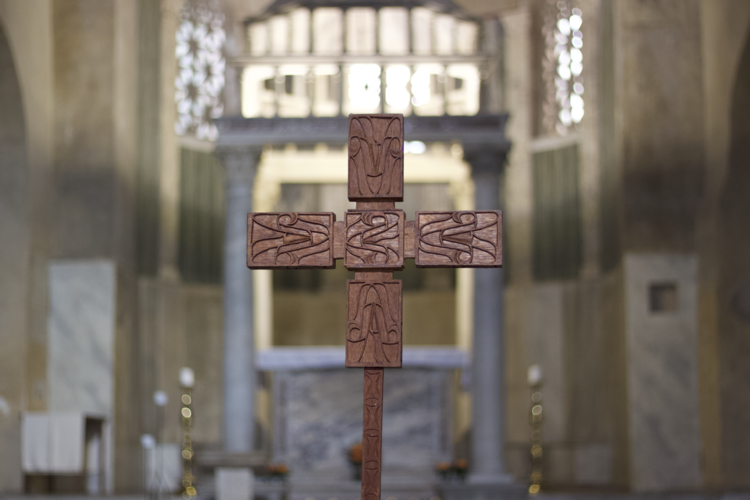 This is the second article in a seven-part series Lenten series on the station churches of Rome. Read Part I here.

The first days of Lent have a decidedly martial character. Ash Wednesday’s opening prayer invokes the metaphor of sallying into battle: a “campaign of Christian service” to be waged with “weapons of self-restraint.” St. Ignatius would have loved it.

The second of Rome’s station churches is dedicated to an earlier soldier-saint, George of Lydda. Soldier-martyrs seem to have left a particular mark on the memory of Roman Christians. St. Sebastian is the most prominent, but the church of another soldier killed in the Diocletian persecution, St. Chrysogonus, appears during the last week of Lent. I suspect the emperor was none too keen on conversions in his ranks.

Winding through alleyways in the still-dark morning to find these hidden churches conjures up, with a bit of imagination, the clandestine worship of early Christians.

St. George in Velabro is a favorite church of mine because of its location. Art historian Elizabeth Lev, who with George Weigel co-wrote the most beautiful contemporary reflections on the station churches, points out that this was originally a working-class neighborhood, clogged with markets, warehouses and the docks of the Tiber’s busiest port. Today the church is tucked into an earlier layer of the street, down a brick staircase, behind a wrought-iron fence and a portico of repurposed Roman columns. The Arch of Septimius Severus, no longer triumphal but sprouting vegetation from the joints of worn white stones, hides it from the Tiber. Cobblestones and weeds weave a gray-green plaid across the ground.

Winding through alleyways in the still-dark morning to find these hidden churches conjures up, with a bit of imagination, the clandestine worship of early Christians. Many of the Lenten stations, in fact, started out as house churches; known as tituli, they took their names from the house’s owner. A few of these houses also became the site of martyrdoms, as was the case with the Basilica of Sts. John and Paul, which follows St. George’s.

The brothers John and Paul—not to be confused with the apostles—were Roman knights beheaded at home on the orders of Emperor Julian, the author of Rome’s last great flourish of anti-Christian persecution. The persecution of Christians by Roman authorities was usually a rather haphazard affair, neither constant nor terribly well organized. Roman paganism was generally tolerant, encouraging a diversity of cults and practices so long as everyone paid due honor to the state’s gods and the divine emperor. Christians who refused to do so were denounced as rigidly unpatriotic.

Soldiers leave the comforts of home behind to campaign in a realm of peril. And we pilgrims, somehow, try to follow.

When Christians needed to be coaxed back to the enlightened virtues of the Roman civic religion, the execution of a few well-chosen leaders was considered more efficient than full-scale slaughter. Julian’s persecution was particularly nasty because it came almost 50 years after the legalization of Christianity by Constantine. Julian had been raised Catholic, and his attack was targeted and smart, couched in the language of religious tolerance. He mostly went after wealthy Christians and attempted to absorb the church’s vast charitable works into the state. Afraid of bad publicity from the execution of John and Paul, he had the brothers beheaded at home instead of in the circus.

Julian’s persecution failed only because he died warring with the Persians just two years into his reign. John and Paul were added to the Roman Canon, and a basilica was built over the site of their martyrdom. Today their bones are collected beneath its altar in a porphyry sarcophagus that looks like an old-fashioned bathtub on little bronze feet.

Some of the church’s decoration is a bit frou-frou for my tastes. The chandeliers were a gift of New York’s Cardinal Spellman. The Mannerist paintings behind the altar explode with pastels and ruffled robing: On the left, the brothers distribute alms; in the center, one continues preaching defiantly even as an executioner’s scimitar descends on his brother’s neck; in a final scene, the saints work a miracle from heaven, but the swarm of figures on earth below are tangled in such baroque contortions that it is impossible to tell who has been saved and from what and whether a second miracle will soon be necessary to fix all of the back problems that seem to have been the unfortunate side effect of 18th-century religious ecstasy.

Yet no ornamentation obscures the gritty courage of John and Paul, which you can still feel when you pray there. Under side altars in the back of the church, simpler marble rectangles conserve the bones of still more martyrs: a dozen Carthaginian Christians, beheaded in 180, and St. Saturnius, another victim of Diocletian. I linger in the basilica after Mass because the silent testimony of those sarcophagi is so eloquent. Soldiers leave the comforts of home behind to campaign in a realm of peril. And we pilgrims, somehow, try to follow.

Editors’ note: This is the second article in a seven-part Lenten series on the station churches of Rome. Sign up for our America Today newsletter to receive a new article each Tuesday during Lent.

Thank you for taking us on a wonderful journey of Roman churches. This is not to criticize, but as a Church we need to remember that the martyrs died resisisting the Hellenism that has infected the morality of the Church from sacred continence to the unwillingness to ordain women as equals. May we honor their witness and their courage, even when confronting our own culture as Church.

Thank you Father for your descriptions, history and thoughts about these small shrines that in my one visit to Rome I would have never been able to see. It is a powerful witness to our faith and a constant reminder that spiritually we are always from age to age, year to year need to pray and refortify with God's help to "the world, the flesh, and the devil" in our lives.