What snowfall in Rome taught me about Lent 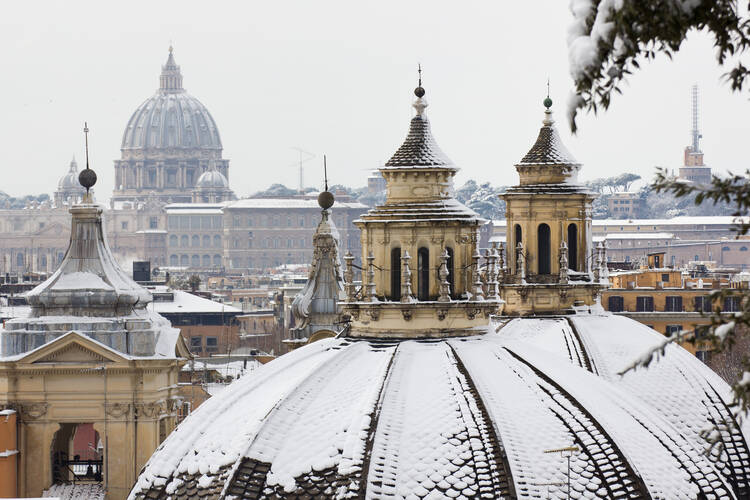 This is the fourth article in a seven-part Lenten series on the station churches of Rome. Part I; Part II; Part III.

On Monday of the second week of Lent, it snows.

The American seminarians are a determined lot, so English Masses continue unimpeded. What Romans consider an epochal blizzard, we Midwesterners call “flurries.” Still, when I emerge from San Clemente and turn toward the Colosseum that morning the flakes coming down are thick and wet and show no sign of letting up. Even by Minnesota standards, this is a real snowfall.

The city’s streets—cobblestones and marble, with no salt or sand for traction—turn out to be more perilous than Minneapolis’s, and since Italians are willing to declare a holiday on far flimsier grounds than snow, it goes without saying that everything in Rome is closed.

The sticky snow coats statues and monuments, so it looks like Bernini has been out making snowmen.

This is, however, one of those moments when Italian inefficiency just winks at you and the place wins you over with pure charm. The sticky snow coats statues and monuments, so it looks like Bernini has been out making snowmen. The stern soldiers atop the Arch of Constantine seem somehow in their element, on the lookout for Hannibal to cross the Alps. Nuns throw snowballs.

I wind up the Aventine with a priest friend from Orlando. He is enchanted to see snow; I am enchanted to see it covering lemons and oranges and clinging to the palms. Even the city’s overflowing dumpsters are suddenly immaculate, like a baptismal garment.

And that is it—there is something baptismal about the experience. The freshness and wonder, the way that what was there before still exists but is now shot through with newness. The city glitters. Why not? Lent is the season of baptismal preparation as much as penance.

The next morning there is still snow on the ground, the air remains frigid and the station church is St. Balbina’s, in a neighborhood that last bustled 1,600 years ago. The long walk there means an extra-early morning, and the heating system in the church has not been updated since the early Middle Ages—which is to say, you can stamp your feet and rub your hands for warmth. Little puffs of breath substitute for incense, the chattering of teeth for bells. Maybe I was too exuberant earlier with the baptismal metaphor.

Lent is the season of baptismal preparation as much as penance.

Luther, of course, was infamous for using the metaphor of snowfall to describe the sacrament’s effects or lack thereof. In his telling, snow falls on the manure-filled field of the human soul, hiding but not changing the underlying dung. Catholic theology, by contrast, has always insisted upon the sacraments’ power of interior transformation. Perhaps a chill reaching down to the bones is necessary to preserve the metaphor’s orthodoxy.

Cold water does, in fact, feature in most baptisms. The Didache, a second-century catechetical treatise, even hints that, while warm water is allowed for baptism, cold is to be preferred. It does not explain why. I wonder about this as I leave St. Balbina’s, glancing up at the earnest face of Christos Pantokrator above the door.

Why I had to climb Rome’s Holy Stairs (on my knees) to believe them
Anthony R. Lusvardi, S.J.

St. Paul reminded the Romans that baptism meant entering Christ’s death. The symbolism was more obvious in those days of full immersion; plunging into the font meant descending into the grave. Perhaps it was only fitting for those waters to be bracing cold.

Perhaps, too, not just the dazzling snow-covered branches but yesterday’s blizzard—its element of danger, immersion in its whirling whiteness, a feeling almost like drowning—somehow conveys what is meant by baptism. Surely the primal sacrament must be more than a gentle dusting that melts by noon.

The air is still cold, but the sun has begun to rise over the ruins of the Baths of Caracalla. The sky is pink and the trees are silver. The crowd at St. Balbina’s, it should not surprise, is the smallest this Lent, but we now share a certain unspoken companionship, like the survivors of a shipwreck. Everyone’s cheeks are rosy. I feel more awake, more alive than any other morning.

Editors’ note: This is the fourth article in a seven-part Lenten series on the station churches of Rome. Sign up for our America Today newsletter to receive a new article each Tuesday during Lent.