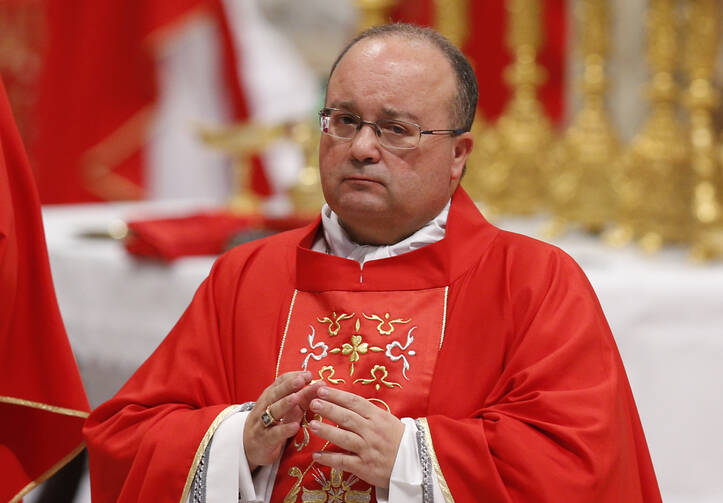 Archbishop Charles Scicluna of Malta participates in a Mass in St. Peter's Basilica at the Vatican in this June 29, 2015, file photo. Archbishop Scicluna was sent by Pope Francis to investigate clerical sexual abuse in Chile. (CNS photo/Paul Haring)

In another surprise decision, Pope Francis has decided to send Archbishop Charles Scicluna of Malta and Msgr. Jordi Bertomeu to Chile on a mission to the Diocese of Osorno, which is led by the controversial Bishop Juan Barros. The church there has suffered greatly for the almost three years since his appointment by the pope, which many in the diocese opposed.

They will go “in the coming days” as “part of the process of reparation and healing of the victims of abuse,” the director of the Holy See Press Office, Greg Burke, said today in a statement to the press.

The Vatican spokesperson also revealed that the pope will send a personal letter to the president of the Chilean bishops’ conference, addressed to “the entire people of God” in Chile, at the request of the country’s bishops. He did not say when this will be released, but sources say it could be very soon.

They will go “in the coming days” as “part of the process of reparation and healing of the victims of abuse.”

The statement also recalled that, as announced last week, Pope Francis will host a group of five Chilean priests at Santa Marta, his Vatican guesthouse residence, in the coming days. All five suffered abuse by Father Karadima. They will be joined by two priests and two lay persons who have supported the victims in their pursuit of justice and spiritual healing.

The visit of Archbishop Scicluna and Msgr. Bertomeu to Osorno appears to be an effort by Francis to promote reconciliation and re-establish ecclesial communion in this diocese, which is at present headed by Bishop Barros. Three of the victims of the Rev. Fernando Karadima, the country’s notorious predator, accuse Bishop Barros of being present during their abuse and covering it up. The victims who accuse him are Juan Carlos Cruz, José Andrés Murillo and James Hamilton. The bishop denies their charges.

The diocese erupted in turmoil in early 2015 when Pope Francis appointed Bishop Barros, formerly bishop of the armed forces, to Osorno. There were scenes of protest, even violence, at his installation in the cathedral of Osorno, which shocked the church in Chile and beyond. Francis staunchly defended the bishop on several occasions since then, including on his return flight to Rome after visiting Chile and Peru last January. On that flight, he also revealed that Bishop Barros has twice handed in his resignation but that he had rejected it because he did not have information that substantiated the accusations against the bishop.

The diocese erupted in turmoil in early 2015 when Pope Francis appointed Bishop Barros to Osorno.

After his visit to Chile, however, Francis understood that he did not have an accurate picture of the situation there, and so he sent Archbishop Scicluna and Msgr. Bertomeu to listen to the victims and assess the situation. Based on their report back, Francis admitted publicly that he had made “serious errors” in handling the victims’ allegations due to misinformation. He admitted his mistakes in a letter to the bishops of Chile on April 8, in which he summoned them to Rome for a summit meeting with him “to discern” the measures to be taken in to repair the situation there and bring justice to the victims. He also invited the three main victims to visit him for several days at Santa Marta.

Bishop Barros, along with the 30 other bishops who are active in the ministry in Chile, handed in their resignations to the pope on May 18 at the end of the summit meeting. The pope is expected to accept several of the resignations. The mission of Archbishop Scicluna and Msgr. Bertomeu to Osorno would seem to be a prelude to Bishop Barros’s resignation and an attempt by Francis to bring harmony and reconciliation in the church community there.

In his letter to the bishops of Chile on April 8, Francis made clear that healing, justice and reconciliation were among his main goals for the church in that country. He told them, “I want to share with you the conviction that the present difficulties are also an occasion to re-establish trust in the Church, a trust broken by our errors and sins and in order to heal the wounds that do not cease to bleed in the whole of Chilean society.”

He asked their “collaboration and assistance in discerning the short-, mid- and long-term measures that must be adopted to re-establish ecclesial communion in Chile, with the goal of repairing as much as possible the scandal and re-establishing justice.” The three events mentioned in today’s Vatican declaration are part of that ongoing process.

What is the right direction, the right thing to do, to heal the Church of Chile? We are left to pray that whatever steps are taken, by the Pope, his representatives, and the Bishops of Chile, restores the comity between the faithful and the Chilean Church.

It would be best if the pope would remove Barros but I doubt he will. Meanwhile the pope effects no real change in the church that would lead to a reduction in clergy sex abuse, like making celibacy optional and allowing women to be priests.

Pope Francis can look more deeply into the causes of the sexual abuse in Chile, but that will take centuries to produce meaningful change. If the plan is to claim to only now realize the scope of the issue, without exposing decades of complicity, it's the only way.

While it appears he wants to address the issue of sexual abuse in the Catholic Church, he's attempting to without causing additional harm to the Church's reputation. Given the depth and breadth of the problem, a plan to merely weather the storm and not actually make things right is doomed to failure.

Those who've done research into this stopped trusting the Church long ago. With every new day come new revelations making it harder for even the most faithful to continue believing its propaganda. Francis must realize the Church just makes its situation worse by continuing to cover up the cover-ups.

There are 12 Step recovery slogans that are made for the choices the Church faces now.

"You can't save your ass and your face at the same time!" | "Whatever you put before your recovery you will ultimately lose anyway." | "To get out of the hole you are in, first stop digging." |"Surrender to win."

Francis could indeed be the one who resets the Church's moral authority but not unless/until he is able to "surrender to win". He must bite the bullet and guide the Church to stop fighting this losing battle. A good start would be to direct his Bishops to:

-Stop lobbying against statute of limitations reforms.
-Cooperate with law enforcement.
-Not block Grand Jury reports.
-Turn over their "Secret Archives"
-Stop hiding/hoarding wealth for a rainy day and realize the storm is upon them.

Another apt slogan from recovery goes "It's simple, not easy!"  Overcoming 2000 years of entrenched defenses is not an easy task. As political as the Catholic Church has become it could be extremely hazardous for the papacy of Francis to even attempt such reforms. Only time will tell if he is the man for this season.