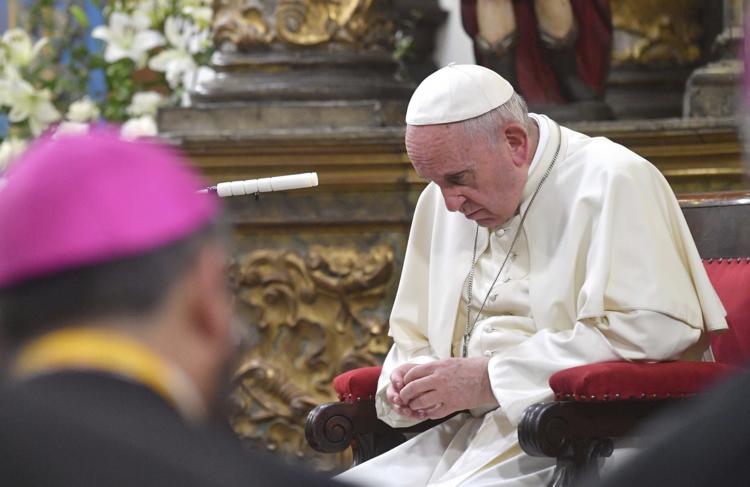 Pope Francis meets with Bishops at the Sacristy of the Cathedral of Santiago, Chile, Tuesday, Jan. 16, 2018. (Luca Zennaro/Pool via AP)

In a stunning move of the utmost importance, the Vatican today announced that Pope Francis has decided to send Archbishop Charles Scicluna of Malta to Chile to listen to the victims that accuse Bishop Juan Barros of being present when they were abused by the country’s most notorious predator, the Rev. Fernando Karadima, and of covering this up.

The Vatican statement, issued in Italian and Spanish, said:

As a result of some information received recently regarding the case of Monsignor Juan de La Cruz Barros Madrid, Bishop of Osorno (Chile), the Holy Father has decided that Msgr. Charles Scicluna, the archbishop of Malta and President of the College for the examination of appeals (“in materia delicta graviora,” “in matters of grave crimes”) in the Ordinary Session of the Congregation for the Doctrine of the Faith, is to go to Chile to hear those who have expressed their wish to submit elements in their possession.

Sources told America that Francis made the crucial decision a few days after returning to the Vatican from his weeklong visit to Chile and Peru during which he had staunchly defended Bishop Barros against those who accused him of cover-up, saying they had not yet produced proof or evidence for such charges, and consequently the allegations can be considered “calumny.”

Until now Pope Francis has stood firmly by Bishop Barros.

Three known victims of Father Karadima—Juan Carlos Cruz, Jose Andres Murillo and James Hamilton—have publicly accused Bishop Barros of being present when Father Karadima abused them. The bishop has categorically denied this and rejected their charges as slander. Until now Francis has stood firmly by the bishop and against the opposition to the appointment of Bishop Barros to head the Diocese of Osorno in 2015. The pope was heavily criticized for this decision and accused of listening to the bishop but not to the victims in Chile. Many charged that he has a blind spot or simply “does not get it” when it comes to the question of abuse.

On the plane from Lima to Rome on Jan. 21, 2018, Francis asked forgiveness for offending the victims and explained that when he said they had yet to provide “proof” for their accusations, he actually meant “evidence.” He asked their pardon for what he said was felt as “a slap in the face” to the victims.

Many charged that Pope Francis has a blind spot or simply “does not get it” when it comes to the question of abuse.

At the same time, he defended Bishop Barros and revealed that at Francis’ behest investigations had been carried out more than once into the accusations against him, but these did not produce any evidence with which to condemn him. The pope said that he was personally convinced that Bishop Barros is innocent. But, he added, “my heart is open” to receiving new evidence. That last remark, which went largely unnoticed at the time, implied that he did not exclude the possibility that things could change. His unexpected decision announced by the Vatican today reopens the case and raises the possibility of new and different scenarios.

Pope Francis’ choice of Archbishop Scicluna is highly significant. He enjoys great credibility among survivors because of his work from 2002 to 2012 as promoter of justice (chief prosecutor) at the Congregation for the Doctrine of the Faith against priests and religious who sexually abused minors.

Archbishop Scicluna first gained prominence on the world stage in 2002 when Cardinal Joseph Ratzinger, then prefect of the C.D.F., called the Maltese civil and canon lawyer to work at his side in the C.D.F. as promoter of justice in cases of abuse of minors by clergy and religious. His appointment came as the abuse scandal was hitting the church in the United States like an earthquake.

Archbishop Scicluna played a key role in drafting the new norms for the church’s handling of sexual abuse allegations.

In the following 10 years, no fewer than 3,000 priests were removed from ministry under the new zero tolerance policy.

In those years at the C.D.F., Archbishop Scicluna played a key role in drafting the new norms for the church’s handling of sexual abuse allegations, norms that are now operational throughout the Catholic Church. He traveled widely to explain the new zero tolerance policy and the accompanying norms to church leaders in different countries and gave many public conferences. He also interacted positively with the international media. He gained fame as a fearless defender of children, minors and survivors of abuse, emerging as the public face of the Vatican in the fight against the sexual abuse of children by clergy.

In April 2005, as Pope John Paul II was on his deathbed, Cardinal Ratzinger sent Archbishop Scicluna to North America to investigate the criminal acts of Father Marcial Maciel, the founder of the Legionaries of Christ. He took depositions from victims, and their testimony led to the removal from public ministry of this very powerful religious leader who had many friends and defenders at the highest levels in the Vatican.

Benedict XVI nominated Scicluna as auxiliary bishop of Malta and appointed him as a member of the C.D.F. in 2012. Pope Francis sent him to Scotland in 2014 to investigate the accusations by victims against Cardinal Keith O’Brien, who subsequently was removed from public ministry.  Francis then appointed him as president of the C.D.F. board of appeals on questions relating to cases of abuse of minors by clergy and religious in January 2015, and a month later named him archbishop of Malta.

Born to Maltese parents in Toronto, Canada, on May 15, 1959, Archbishop Scicluna came to Malta with his family in 1960 when he was 11 months old. He was ordained a priest in 1986. After receiving his doctorate in canon law at the Pontifical Gregorian University in Rome in 1991, he went on to serve over the next four years as defender of the marriage bond and promoter of justice at the Metropolitan Court of Malta. He was also professor of pastoral theology and canon law at the local faculty of theology and vice-rector of the major seminary of the archdiocese. Moreover, he did pastoral ministry in the parishes of St. Gregory the Great in Sliema and Transfiguration in Iklin.

Jan. 30: This article has been updated to correct Archbishop Scicluna's biography.

The Legionaries of Christ enjoy the support of Pope Francis and the whole Church they were not removed from mibistry. Only the founder was. The wording about that part was confusing. This article brings us good news

It seems to read ok now. I’m just glad that Francis is sending a credible investigator. Although the article says the issue has been investigated twice already. If evidence is now discovered I hope Francis looks into the two previous investigators.

It seems to read ok now. I’m just glad that Francis is sending a credible investigator. Although the article says the issue has been investigated twice already. If evidence is now discovered I hope Francis looks into the two previous investigators.

Thank goodness. Pope Francis, and all church leaders, need to understand that the sin of child abuse has so shaken our foundations that decisive action must be taken when claims such as those from the three victims in Chile arise. We must not waver in our support of victims or our commitment to purge the church of all aspects of this vile abuse.

Why no reference to Francis’ letter of 01-31-15, which has been widely quoted but difficult to find, and the myriad questions arising from it?

Ellen B
5 years ago

Unfortunately, the Pope has already done some damage to the goodwill he enjoyed. He did that in naming a controversial figure to the post in the first place. I thought that some of the accusations were that he knew & did nothing... sounds like the scope of the investigation is limited to exclude that portion of the accusations.

The issues are accountability & transparency. I am anxious for my church to be the light on the mountain top, rather than hidden under the bushel basket.