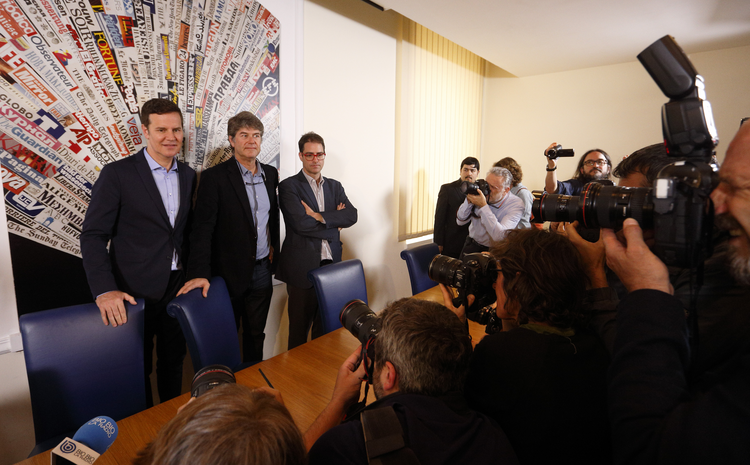 Chilean clerical sex abuse survivors Juan Carlos Cruz, James Hamilton and Jose Andres Murillo in Rome, May 2. The three met Pope Francis individually at the Vatican April 27-29. The Vatican announced on May 22 that a second group of abuse victims will visit the pope in June (CNS photo/Paul Haring).

Pope Francis will receive a second group of Chilean victims of “Rev. Fernando Karadima and his followers,” this time “five priests who have been victims of the abuses of power, conscience and sex,” the Vatican announced tonight.

It said the encounters will take place from June 1-3 at Santa Marta, the Vatican guesthouse where Francis lives. Like the first three Chilean victims whom the pope hosted at the end of April and early May, these victims too will be the personal guests of the pope.

The encounters will take place from June 1-3 at Santa Marta, the Vatican guesthouse where Francis lives.

The Vatican said the five priests “will be accompanied by two other priests who assisted them on their spiritual and juridical journey, as well as two lay people who have also been involved in their sufferings.” All nine persons will be “the guests on the pope.”

The majority of the individuals who will meet with with the pope, the statement said, participated in the encounters with Archbishop Charles Scicluna and Monsignor Jordi Bertomeu during their “special mission” to Chile at the end of February and early March. The other persons who are coming but did not meet the papal envoys are persons who “collaborated in the weeks after the visit.” The statement does not say with whom they collaborated or how.

“Pope Francis wishes to show his closeness to the priests who were abused, to accompany them in their pain.”

The Vatican said this “new encounter” has been planned a month ago and with it, “Pope Francis wishes to show his closeness to the priests who were abused, to accompany them in their pain, and to hear their courageous views so as to improve the present preventative measures and the fight against the abuses in the church.”

In the statement, released late this evening in Spanish and Italian, the Vatican said “this concludes the first phase of the encounters that the pope wished to have with the victims of abusive system that had been installed for many decades” in the parish of the Sacred Heart of Providence.

It did not exclude that there could be other such encounters of victims with the pope in the future. “These priests and lay persons represent all the victims of the abuse of the clergy in Chile, but it does not exclude that similar initiatives may be repeated in the future,” the statement said.

At the early June meeting, “there will be different encounters over the weekend, that will unfold in an atmosphere of trust and confidentiality,” the statement said. Then on the morning of June 2 the pope will celebrate a private Mass in Santa Marta for them, and that afternoon he will hold a group meeting with them, and then continue individual private meetings after that.

The statement concluded with these words: “The Holy Father continues asking the faithful in Chile—and especially the faithful of those parishes where these priests are carrying out their pastoral ministry—that they accompany them with the prayer and solidarity of these days.”