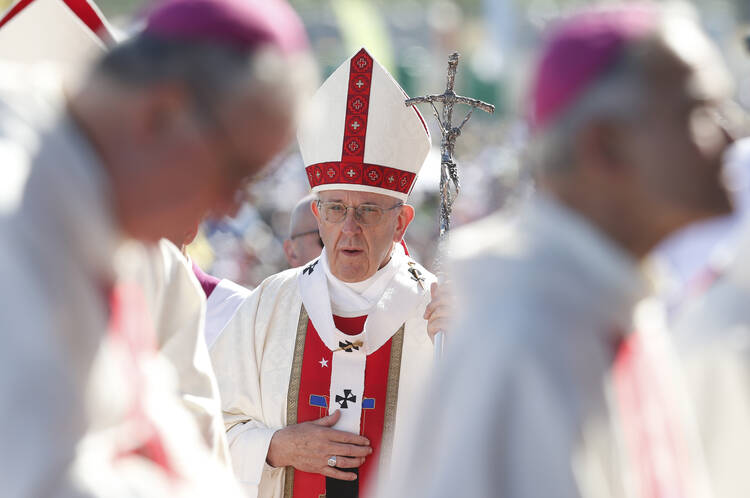 Pope Francis arrives in procession with other bishops during Mass at the Maquehue Airport near Temuco, Chile, Jan. 17. (CNS photo/Paul Haring)

Pope Francis pulled no punches in the letter he gave to the 34 Chilean bishops at their first encounter on May 15 to serve as the basis for their “reflection and prayer” over the following 24 hours. In it, he accuses them of enacting such “a transformation in the center” of the church in Chile that “its sin became the center of attention,” not Jesus Christ.

In the 10-page text, obtained by Chile’s Canal 13 television, he presented a searing diagnosis of what had transformed this once prophetic and esteemed church in Latin America to one of the least respected. Led by its bishops, the pope wrote, “it turned in on itself in such a way that the consequences of all this came at a very high price: it became the center of attention.”

He told them that, “the painful and shameful fact of the sexual abuse of minors, of the abuses of power, and of the abuses of conscience on the part of ministers of the church, as well as the form in which these situations happened, highlighted this change of center.”

Francis presented a searing diagnosis of what had transformed this once prophetic and esteemed church in Latin America to one of the least respected.

He based his diagnosis on the 2,300-page report given to him by Archbishop Charles Scicluna and Msgr. Jordi Bertomeu on their return from a special mission to Chile. Francis had asked them to go a few days after returning from his own visit to that country. They went at the end of February through early March to listen to the victims of sexual abuse by the Rev. Fernando Karadima. (A Vatican tribunal found the priest guilty of these crimes in 2011 and sentenced him to a life of prayer and penance). He did so because three victims—Juan Cruz, James Hamilton and Andrés Murillo—accused Bishop Juan Barros of Osorno of being present when they were abused and of covering it up, though the bishop denied it. Francis had strongly defended Bishop Barros up to that point for what he said was lack of evidence.

But on receiving his envoys’ report, he realized that he had been given “untruthful and unbalanced information” by persons he did not identify. He called the three survivors to Rome and personally asked the pardon of each one for the wrong he and the church did them and acknowledged that he himself “was part of the problem.” At the same time he summoned all the Chilean bishops to Rome to discern together with him the measures to be taken in the short, medium and long terms to repair the damage done to the victims, to promote reconciliation in the Chilean church and to help it return to being a prophetic institution, with pastors who are up to the task.

In this hitherto secret letter, Francis reminded the bishops that “an individual or an illustrious group can never pretend to be the totality of the People of God, and much less believe itself to be the authentic voice of its interpretation.” He was alluding in the first place to Father Karadima, a charismatic priest who exercised enormous influence among the young, especially those from the higher echelons of Chilean society, and attracted as many as 50 of them to the priesthood, four of whom became bishops, including the controversial Juan Barros.

Francis denounced “the psychology of the elite,” which he appears to attribute to the bishops too and not only to Karadima’s circle, “ends by generating dynamics of division, separation, closed circles that result in a narcissistic and authoritarian spirituality, in which, instead of evangelizing, what is important is to feel oneself special, different from the others.”

Francis told them, “Messianism, elitism and clericalism are all symptoms of this perversion in a way of being church.”

Francis told them, “Messianism, elitism and clericalism are all symptoms of this perversion in a way of being church.” He added, “Synonymous also of this perversion is the loss of a healthy consciousness of knowing that we belong to the holy, faithful People of God who were before us and—thank God—will be after us.”

He referred to the “attitudes” of some of bishops toward “past and present facts” of abuse and told them frankly that “the problems that today exist in the church community [in Chile] are not resolved only by addressing concrete cases and reducing them to the removal of persons; this—and I say it clearly—has to be done, but it is not sufficient. It’s necessary to go beyond.”

He said it is necessary to go “seek out the roots and the structures that permitted these concrete things to happen and to be perpetuated.”

Francis told the bishops, “The aforementioned painful situations are indicators that something is bad in the church body.” It is necessary, therefore, not only “to address the concrete cases” but also “to discover the dynamics that made it possible for such attitudes and evils to occur.”

“To remove persons, without checking the health of the body” is a false way ahead, he said.

He called on them collectively and individually “to take responsibility” for what has happened and not pass the buck to another.

“Please let us guard against the temptation to try to save ourselves, to save our reputation,” he said, “[because] the gravity of what has happened does not permit us to become experts at finding scapegoats.”

Lest there be any doubt about the seriousness of the situation, Pope Francis, drawing on the Scicluna-Bertomeu report, referred to several concrete cases of the abuse of what he has called sex, power and conscience, including the inadequate ways these abuse cases had been dealt with up to now. He mentioned “grave defects” by bishops in dealing with reports of sexual abuse of minors and the slowness, or indeed the failure, to investigate some denunciations of abuse and “grave negligence” by bishops and religious superiors in protecting children from abuse. He said the report revealed that pressure was put on those who were giving testimony in abuse cases and that documents relevant for canonical trials were destroyed in church archives.

He spoke about the failures in seminary formation and how some bishops and religious superiors had placed priests in charge of educational institutions who were suspected of being active homosexuals. He also mentioned that some men who were expelled from their religious orders for immoral conduct were subsequently incardinated into dioceses by bishops and given positions that put them in contact with minors. His message was clear: This cannot continue, and the bishops have to take collective and individual responsibility for these and many other wrongs.

He concluded his document by reminding them “we are here conscious of being sinners who have been pardoned or sinners who want to be pardoned or sinners with a penitential opening, and this is our joy.” Indeed, he said, “we wish to be pastors in the style of Jesus wounded, dead and risen,” and “we wish to be a church that is capable of putting at its center that which is important: the service of its Lord in the hungry, in the prisoner, in the person who is thirsty, in the displaced person, in the naked, the sick and the abused.”

Viva Papa Francisco......the light of the Church and the hope of reform

A very loud and prayerful, "AMEN!"

I so admire Pope Francis' ability to speak the truth clearly and courageously!

Powerful statements by the Pope. And an appropriately humble group response from the Chilean Bishops as a beginning to repentance.
It is beyond belief that the voices of so many injured and abused (around the world!) can be ignored for so long. My parish calls it a "betrayal of trust", for the abuse continues after the events. I am glad that Pope Francis identifies the overarching problem as one of "sexual abuse, abuse of power and abuse of conscience." This will take a lot of work to address - by all of us.