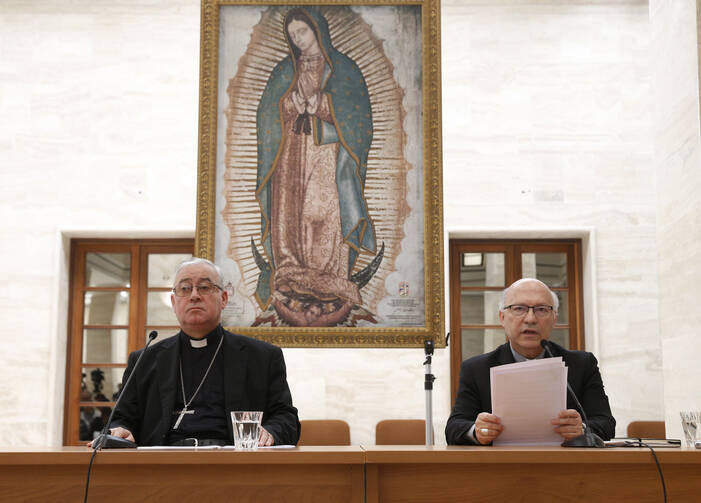 In a decision which appears to be without precedent in the history of the church, all 34 Chilean bishops, including two cardinals, who participated in the summit with Pope Francis over the past three days, announced today that they have “handed in our resignations to the Holy Father, in written form, so that he can freely decide for each one of us.”

The bishops praised the “courage and perseverance of the victims” of the abuses of what Francis has called sex, power and conscience, and said “we implore once again their pardon, and their help to continue to advance on the path of healing of the wounds, so that they can be healed.”

A declaration to this effect was read by two of their representatives—Bishop Fernando Ramos, secretary general of the conference, and Bishop Juan Ignacio Gonzalez of the diocese of San Bernardo—at a press conference in Rome, May 18.

It came at the end of a three-day summit of “discernment” led by Pope Francis. On the first day, May 15, he read a 10-page document to them which he had prepared that offered his diagnosis of the crisis in the Chilean church, based on the report from Archbishop Charles Scicluna and Msgr. Jordi Bertomeu, whom he has sent to Chile “to listen to the victims.” Francis gave each of the bishop a copy of that text and asked them to “reflect and pray” on it. On the following two days each of the bishops spoke from the heart, in a spirit of dialogue. And then the bishops decided on the steps they should take, which they outlined in this declaration.

They began the declaration by thanking Pope Francis for his “listening as a father” and for “his fraternal correction,” and “above all” they stated, in a contrite and humble tone, “we want to ask pardon for the pain caused to the victims, to the pope, to the people of God and to our country for the grave errors and omissions caused by us.”

The bishops thanked Archbishop Scicluna and Father Jordi Bertomeu for “their pastoral and personal dedication” and for “the effort they invested in these past weeks to seek to heal the wounds of the society and of the church in our country.”

They “thanked the victims” too “for their perseverance and their courage, notwithstanding the enormous personal, spiritual, social and family difficulties that they had to face, together with the incomprehension and the attacks from the same church community.”

Then, doing just as the pope had done when he met the three victims of Father Fernando Karadima, they said, “we implore once again their pardon, and their help to continue to advance on the path of healing of the wounds, so that they can be healed.”

After asking pardon from the victims, they then made their historic announcement: “we wish to communicate that all of us bishops present in Rome have, in written form, given our resignations (“nuestros cargos,” or “their charge as bishops”) into the hands of the Holy Father, so that he may freely decide for each one of us.”

Explaining this, they said that they “have placed their pastoral charges at the complete disposition of the pope” and this means that “while the Holy Father is deciding what to do, each of the bishop members of the Episcopal Conference of Chile, will continue his pastoral work, and in full functions.”

In their declaration, the bishops said, “we go back on the journey, knowing that these days of honest dialogue represent a milestone of a profound process of change guided by Pope Francis” and “in communion with him, we wish to re-establish justice and contribute to the reparation of the damage caused.” They do this they said, “to give new impulse to the prophetic mission of the church in Chile, whose center ought to always be in Christ.”

They added, “we wish that the face of the Lord will turn resplendent again in our church and we commit ourselves to this” and “with humility and hope we ask everyone to help us to travel on this road.”

They concluded by saying that “following the recommendations of the Holy Father, we implore God that in these difficult hours, but (hours) full of hope, the church may be protected by the Lord and Our Lady of Carmen.”

With initial reporting from Catholic News Service. This story has been updated.

Viva Papa Francisco! He is the hope of our Church as led by the Holy Spirit.
Estamos orando por ti Santo Padre!

To be truly valid many of the resignations will have to be accepted. High levels of mia culpa style theatrics are unacceptable. My hope and prayer is for the possibility of TRUE men of faith rising up to guide the flock and not in the continuation of disconnected and so-called leaders i.e. The Princes of the Church.

This is a start but it will not be complete until Francis resigns
and lives a life of Penance along with Benedict.

what a model of institutional confession and contrition for not only the
Church but for all secular institutions which have harmed or colluded in harming individuals. Ave Maria! I can't wait to hear the response of the 3 Chilean victims who met with Francis first, last week. Could this be the phoenix (holy spirit) rising from the ashes of the Chilean Church?

Jeffrey More: Essentially my first thought, too. As for contrition, I sincerely doubt there is such.

They did the right thing, unlike Roger Mahony and other ego-driven U.S. bishops.

Amen to Pope Francis for going after the sins in our church, financial abuse and sexual abuse. His message of inclusion of all people is welcomed. The challenge is to bring back young people into our Church.