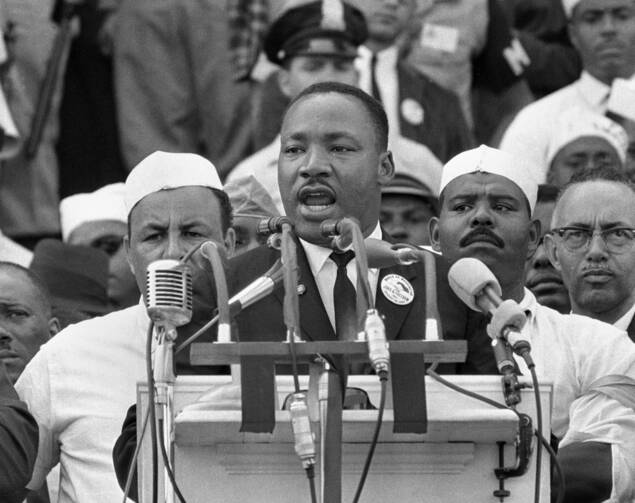 In this Aug. 28, 1963, file photo, Dr. Martin Luther King Jr., head of the Southern Christian Leadership Conference, addresses marchers during his "I Have a Dream" speech at the Lincoln Memorial in Washington. (AP Photo, File)

Both men experienced injustice but neither responded with violence nor remained silent. They showed great faith in God and the strength of love as an effective force for social transformation. This active love that resisted violence and upheld human dignity and rights they called nonviolence. The movements they led did not require arms or armies but won independence and civil rights through nonviolent struggle.

Today, Pope Francis is the world leader who most fully grasps the urgency of this moment and the commitment to nonviolent action.

In 2018, we remember the 70th and 50th anniversaries of the deaths of two of the greatest leaders of the last century.

In the run-up to the new year, Francis asked that a simple image and message be circulated in his name. The front side of the card is a photo of a young Japanese boy carrying his dead younger brother on his back while standing in line at a crematorium in Nagasaki. Joseph Roger O’Donnell, a U.S. photographer, captured the harrowing image following the atomic bombing of that city in 1945. The inscription reads, “The sadness of the young boy is expressed only in his biting lips, oozing with blood.” The back of the card simply says, “The fruits of war.”

In an address to a joint session of the U.S. Congress in 2015, Pope Francis highlighted the legacies of four Americans who forever shaped “fundamental values” and offered us a way of “seeing and interpreting reality”: Abraham Lincoln, Martin Luther King Jr., Dorothy Day and Thomas Merton. The last three are well known for their concrete and unwavering commitment to Gospel nonviolence.

And one year ago, Pope Francis dedicated his annual World Day of Peace message to “nonviolence: a style of politics for peace.” He said that in the context of the pervasive violence in which we live we must commit ourselves anew to make active nonviolence “our way of life” and “the hallmark” of our decisions, relationships and actions—locally and in the international order.

Pope Francis: We must commit ourselves anew to make active nonviolence “our way of life.”

As is typical of Francis, in the message he also said that our world today is experiencing a “horrifying world war fought piecemeal.” It is not a global battle among the armies of nations but is largely characterized by civil wars, acts of terrorism, organized crime, street violence, the threat of nuclear war and the stockpiling weapons of mass destruction—all with immense consequences.

“Countering violence with violence leads at best to forced migrations and enormous suffering,” Pope Francis said, “because vast amounts of resources are diverted to military ends and away from the everyday needs of young people, families experiencing hardship, the elderly, the infirm and the great majority of people in our world.”

In 2016, global military expenditures reached $1.69 trillion and more than a third of the total, $611 billion, is spent by the United States alone, according to the Stockholm International Peace Research Institute. Meanwhile, the United Nations estimates that about 815 million people globally suffer from hunger each day and about 258 million people have migrated from their country of origin.

“Countering violence with violence leads at best to forced migrations and enormous suffering.”

Speaking in 1967 during the escalation of the Vietnam War and the arms race, Martin Luther King Jr. offered a spiritual diagnosis: “A nation that continues year after year to spend more money on military defense than on programs of social uplift is approaching spiritual death.”

The threat of violence is so grave, Dr. King famously said in that speech, that the choice we face is “nonviolent coexistence or violent co-annihilation.” In this context, what is the response of Christians?

Gandhi, a Hindu, offered a timeless insight into the Gospels by identifying the way of Jesus as “nonviolence par excellence.” In his World Day of Peace message, Pope Francis recalled the words and deeds of Jesus in this same light.

“Jesus marked out the path of nonviolence” by showing us the way of love, hospitality and forgiveness, said Pope Francis. He specifically recalled Jesus saving the woman caught in adultery from those who wanted to stone her to death (cf. Jn 8:1-11) and Jesus telling Peter, “Put your sword back into its sheath,” when Peter attempted to defend Jesus from those wielding swords and clubs (Mt 26:52).

“For Christians, nonviolence is not merely tactical behavior but a person’s way of being.”

A commitment to Gospel nonviolence is an emerging feature of Catholic social teaching, especially in the magisterium of recent popes. In his Angelus message on Feb. 18, 2007, Pope Benedict XVI said: “For Christians, nonviolence is not merely tactical behavior but a person’s way of being, the attitude of one who is so convinced of God’s love and power that he or she is not afraid to tackle evil with the weapons of love and truth alone. Love of one’s enemy constitutes the nucleus of the ‘Christian revolution.’”

Will this prophet be heard? America’s editors on the assassination of Martin Luther King Jr.
The Editors

This revolution is personal and political. Large-scale strategic nonviolence has proven to be an effective means for seeking and building peace. The 20th century offers many examples, beginning with Gandhi in India but also reaching every corner of the world: the civil rights movement in the United States, the solidarity movement in Poland, the anti-apartheid campaign in South Africa and the successful ousting of dictators in Chile and other countries.

“Nonviolence is sometimes taken to mean surrender, lack of involvement and passivity, but this is not the case,” Pope Francis emphasized, then drawing attention to the leadership of women in nonviolent movements, like Leymah Gbowee and the thousands of Liberian women who “organized pray-ins and nonviolent protest that resulted in high-level peace talks to end the second civil war in Liberia.”

The pope’s emphasis on nonviolence not only reflects the peacemaking legacy of his namesake, St. Francis of Assisi, but also helps ensure that the essential witness of Gandhi and Dr. King and many other nonviolent prophets will continue to be remembered and—most importantly—put into practice.

This article was originally published in French in Relations, the social analysis review of the Quebec Jesuits.

Luke Hansen, S.J., is a student at the Pontifical Gregorian University in Rome and a former associate editor of America.

Rev. Dr. King not only talked about nonviolence, he practiced it and mobilized thousands of others to do the same in their struggle for liberation. Pope Francis has merely given positive affirmations towards nonviolence, he has yet to mobilize any Catholics into nonviolent actions. Where is his emphasis in having Bishops and Clergy receive training in nonviolence? My experience of Catholic Clergyman is that the majority of them are either indifferent or they support the military-industrial complex with their silence on the topic. If there are Catholic Clergy or Women Religious that do actually put nonviolence into practice, they tend to be seen as radical priest or nuns and are marginalized by their own brothers and sisters. I realize that even Rev. Dr. King was marginalized by his fellow Black Baptist Preachers, but he still was willing to put his philosophy into action. I hope that Francis' words turn into action, but I won't hold my breath.

Pope Francis is hardly “nonviolent” in his speech toward those with whom he disagrees.

“A commitment to Gospel nonviolence is an emerging feature of Catholic social teaching, especially in the magisterium of recent popes.” I agree but I do have serious reservations about how successful our religious leaders are in conveying this message. I also have an issue with referring to nonviolence as just a social teaching. Is it or isn’t it a serious sin to do violence to another human being, no matter the circumstances?

For too many of its 2000 years, war, violence, terror, and torture have been hallmarks of Catholic history. Even some “saints” are connected directly with violence. I do wish one Pope or another would come outright and say that all those behaviors were serious sins. And if they are not, tell me why not? Our argument against the death penalty is that there are numerous ways to protect society other than killing a person. Are there less lethal ways to protect ourselves from violence other than shooting people?

The day after the 50th anniversary of the murder of Martin Luther King, Jr., where are the voices of the USA Bishops in our pulpits on the issues of the violence of racism, poverty, income inequality, foreign wars, and xenophobia? One wonders if indeed “A commitment to Gospel nonviolence is an emerging feature of Catholic social teaching, ….”

Pope Francis is in my view a good, holy man, though like all of us, imperfect. Rev. Martin Luther King was also imperfect, but courageously used nonviolence in his rightful efforts to achieve justice for black people who had suffered such discrimination and oppression in our nation. Of course, King desired a society in which race was not the determining factor in being an equal member of the nation.
Rev. King graduated from Crozer Theological Seminary in Chester, Pennsylvania in 1951. I know the city of Chester well, as I live in its suburbs. For some years in the past I participated in peaceful protests outside the city's abortion center. I think it's sad that this abortion center, which has killed many thousands of innocent unborn human beings since 1974, is located on the site of the long-closed seminary alma mater of Rev. King.