Pope Francis calls for a “politics of nonviolence” in annual World Day of Peace message. 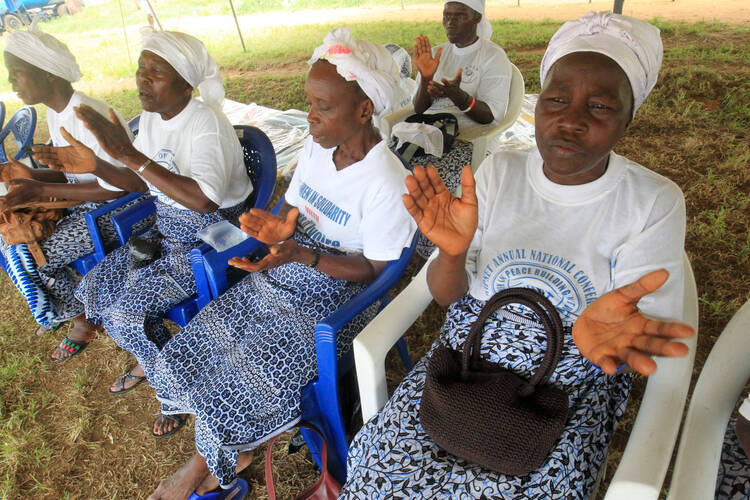 Members of Women in Peacebuilding Network attend a Dec. 10 event in Monrovia, Liberia, to mark the conclusion of a campaign against gender-based violence.

Pope Francis has called for a “politics of nonviolence” in his World Day of Peace Message for 2017. “Violence is not the cure for our broken world,” he writes. On the contrary, “To be true followers of Jesus today,” he argues, “also includes embracing his teaching about nonviolence.”

In the message, dated Dec. 8 and released on Dec. 12, ahead of the official commemoration of the World Day of Peace on Jan. 1, the pope called for active nonviolence as a political strategy and for peacebuilding on the part of “political and religious leaders, the heads of international institutions and business and media executives.” Peacebuilding consists of initiatives, such as anti-incitement campaigns and interreligious dialogue, to prevent the outbreak or resumption of violent conflict.

The 2017 message is the first extensive treatment of nonviolence by a pope, though St. John Paul II devoted three paragraphs to the topic in his encyclical “Centesimus Annus.” It comes as a response to a meeting hosted last spring by the Pontifical Council for Justice and Peace with Catholic peace activists, including members of Pax Christi International. There has been much speculation in activist circles about what the document might contain.

Following the May meeting, some strict pacifists had spun stories that the meeting had called for abandonment of the church’s 1,600-year-old teaching on "just war." In a message to the conferees, Pope Francis had made clear that states had a duty to protect their people against aggression, a pillar of the just war tradition. Nonetheless, a number of just-war thinkers worried that the stage might be set for a repudiation of the legitimate use of force.

In his December message Pope Francis offered no critique of just-war thinking or the failures of governments and the international community to abide by just-war principles. The message contains only an oblique reference to “the church’s application of moral norms” as one of the means by which she works for peace.

The message elevates nonviolence by noting that “peacemaking through active nonviolence is a natural and necessary complement to the church’s continuing efforts to limit the use of force by the application of moral norms.”

Others suggested the message might spell out a more recent theory called “just peace” or “just peacemaking,” which attempts to articulate a range of initiatives that can diminish or alter conflict short of war. The one quasi-technical term the pope uses, however, is “peacebuilding,” a catch-all for a variety of nonviolent initiatives aimed at securing peace without armed force.

One group, then, that may find some validation in the message is the Catholic Peacebuilding Network (C.P.N.)  and especially a leading member the University of Notre Dame’s Kroc Institute for International Peace Studies. Pope Francis observes, “The church has been involved in nonviolent peacebuilding strategies in many countries, engaging even the most violent parties in efforts to build a just and lasting peace.”

With headquarters at the University of Notre Dame, C.P.N. is an association that brings scholars and practitioners together in service of local religious peacemakers around the world in countries such as Colombia, the Philippines (in Mindinao) and Burundi. Notre Dame’s Kroc Institute has been cited in the recent Colombian peace accords and has been asked to contribute to post-conflict reconciliation there.

Pope Francis is careful to note that peacebuilding is not exclusively a Catholic activity “but is typical of many religious traditions for which compassion and nonviolence are essential elements pointing to the way of life.” One of the groups in that tradition has been the Mennonite Central Committee.

C.P.N. was greatly aided in its early years by the pioneering work of Mennonites, like John Paul Lederach, as it conducted workshops and programs for local Catholic peacemakers. In 2004 the International Mennonite Catholic Dialogue anticipated the teaching of this year’s message, concluding that “reconciliation, nonviolence and active peacemaking are at the heart of the Gospel.”

Veterans of that dialogue will surely take satisfaction in Pope Francis’ endorsement of nonviolence. The test now, as Gerald W. Schlabach, a leader of the grassroots North American Mennonite-Catholic dialogue called Bridgefolk has said, will be to make the church’s teaching on nonviolence “church-wide and parish deep.”

Drew Christiansen, S. J., the former editor of America, is Distinguished Professor of Ethics and Global Human Development at Georgetown University. He was a member of the first round of the International Mennonite-Catholic Dialogue and has worked with the Catholic Peacebuilding Network from its inception.

Editors' Note: A correction was made at 11:03 a.m. on Dec. 12 to clarify the role of the University of Notre Dame’s Kroc Institute for International Peace Studies with the Catholic Peacebuilding Network and the institute's work in Colombia.

Drew Christiansen, S.J., the former editor of America, is Distinguished Professor of Ethics and Global Human Development at Georgetown University. He was a member of the first round of the International Mennonite-Catholic Dialogue and has worked with the Catholic Peacebuilding Network from its inception.

Show Comments (
2
)
Comments are automatically closed two weeks after an article's initial publication. See our comments policy for more.
5 years 5 months ago
I read the message with joy and gratitude. Now we who have worked to promote nonviolence must act boldly to promote and mainstream nonviolence!
Eli McCarthy
5 years 5 months ago
Glad to see the topic of this article. Seems to me that the WDP "validated" Jesus' way of active nonviolence. Let's see if pacifists, just peace supporters, and especially peacebuilders will do their work/advocacy in accord with active nonviolence. After all, as Pope Francis confirms, "To be true followers of Jesus today includes embracing his teaching about nonviolence.” Further, with the Sermon on the Mount identified by Pope Francis as the "manual" for our peacemaking, a door has been opened. Enjoy Christmas everyone.