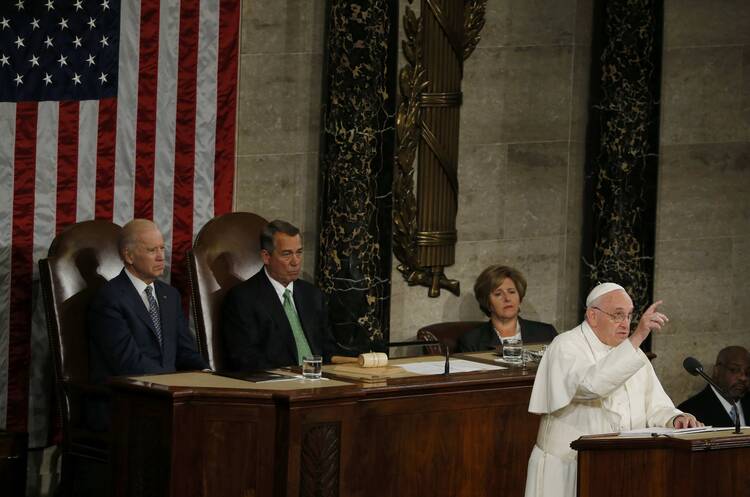 Americans are marking today what would have been the Rev. Dr. Martin Luther King, Jr.’s, 88th birthday, honoring the famed African-American civil rights pioneer for his pursuit of justice.

Dr. King’s appeal, of course, is global, his message of nonviolent resistance in the face of persecution, which has inspired countless acts of civil disobedience during his life and even moreso since his assassination in 1968.

Among Dr. King’s biggest fans is Pope Francis, who has invoked the civil rights crusader in three high-profile messages delivered during his pontificate.

The first came in the pope’s 2015 address to the U.S. Congress, in which he held up four Americans who, he said, “offer us a way of seeing and interpreting reality.” Among them was Dr. King.

Following a section devoted to President Abraham Lincoln, the pope said, “Here too I think of the march which Martin Luther King led from Selma to Montgomery fifty years ago as part of the campaign to fulfill his ‘dream’ of full civil and political rights for African Americans.”

“That dream continues to inspire us all,” he continued. “I am happy that America continues to be, for many, a land of ‘dreams.’ Dreams which lead to action, to participation, to commitment. Dreams which awaken what is deepest and truest in the life of a people.”

A few months later, Francis again invoked Dr. King, this time in his pastoral letter on the family, “Amoris Laetitia”.

In a section about the power of love to remain resilient, even in the face of trial, the pope writes, “Here I think of the words of Martin Luther King who met every kind of trial and tribulation with fraternal love.”

“And when you come to the point that you look in the face of every man and see deep down within him what religion calls ‘the image of God’, you begin to love him in spite of [everything],” Dr. King continued.

Finally, just a few days before the U.S. election, Francis delivered a passionate speech in which he warned the world not to succumb to fear, which he said “weakens and destabilizes us, destroys our psychological and spiritual defenses, numbs us to the suffering of others.”

The speech was viewed in some circles as a warning against political movements sympathetic to nativism, including Donald J. Trump’s candidacy. Mr. Trump, of course, went on to win the U.S. presidential election, with a slim majority of U.S. Catholics voting for him.

In that speech, Pope Francis again invoked Dr. King, reiterating that he “always chose fraternal love, even in the midst of the worst persecution and humiliation.”

He went on to quote Dr. King’s Montgomery sermon.

“Hate for hate only intensifies the existence of hate and evil in the universe,” the pope said, quoting Dr. King. “If I hit you and you hit me back and so on, you see, that goes on ad infinitum. It just never ends.”

@MikeOLoughlin
Show Comments (
1
)
Comments are automatically closed two weeks after an article's initial publication. See our comments policy for more.
Benjamin Westerhaus
5 years 7 months ago
Today is not his birthday. Yesterday, January 15th, was. Please edit and update the first paragraph of your article.