Will this prophet be heard? America’s editors on the assassination of Martin Luther King Jr. 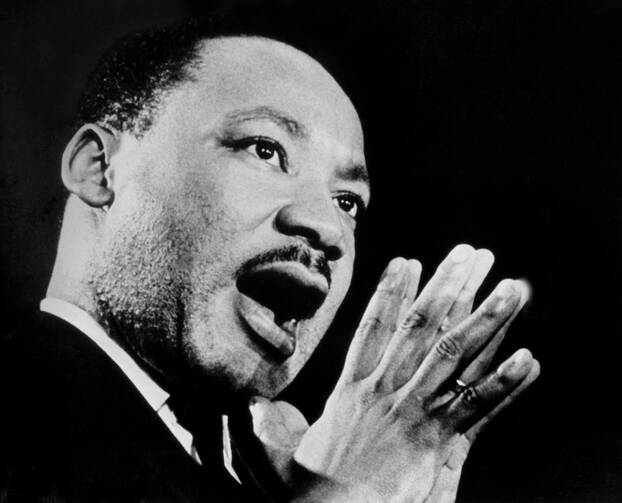 The following editorial was originally published on April 20, 1968.

The prophet speaks to men for God. Men are never sure that they wish to hear what God says to them. They sense that God's message will not be altogether comfortable. So men strive to ignore the prophet, or to silence him. Failing all else, they kill him. It is then, strangely, that the prophetic voice rings out most clearly, with greatest force. It is then, when the hour seems too late and all appears lost, that the prophet may be heard, God's message may be received, and men may take a decisive step toward a better way of life.

We mourn that the prophet must die in order to be heard. We are ashamed that his last and most eloquent word must be the shedding of his blood. What must not happen is that even this last word go finally unheard. The prophet must not have died in vain.

A prophet speaks in three ways. He reads the future. He denounces the sins of men and warns of God's punishments. He promises, with confidence, in God's name, a brighter tomorrow.

As we listen now to the moving words Martin Luther King uttered, close to tears, on the night before he died, we are willing to believe that this man, in some sort, peered into the misty future and half glimpsed his death. Humbly and simply he said: "I want to live"—as if he knew he would not. No matter, he said, gently brushing aside his intimation of death, "I want to do God's will." This good man spoke exactly as did another, on the night before He died.

This prophet warned that America would pay for its sin. We are so paying, and will pay for a long time to come.

Martin Luther King denounced one sin, one wickedness, of men. The evil he denounced was the sin of our time, the sin of the respectable, of the good, the sin that has been laundered and tricked out as relatively innocent, quite understandable, and—after some token penance—best forgotten rather than repented. It is that black sin against the black man that has been whitewashed, aptly enough, by the white man. This prophet warned that America would pay for its sin. We are so paying, and will pay for a long time to come.

But above all else, Martin Luther King was a prophet of hope and not of doom. "I have a dream," he cried again and again in his most eloquent hour; and, on the night before he died: "I have seen the Promised Land. Mine eyes have seen the glory of the coming of the Lord." As he believed in the ultimate might of nonviolence, so did he strongly believe in the ultimate triumph of racial justice in these United States. He would not have it otherwise than that one day the black American and the white American would face one another not as sworn enemies but as blood brothers, would face one another and clasp the other's hand in equal dignity and opportunity, with mutual respect, with unfeigned love.

There is only one question, a question for every man, woman and child in this country: Will this prophet be heard in death as he was not heard in life? Will the martyr accomplish by his blood what he could not achieve by his words? Will we make the dream of Martin Luther King come true?

The Editors
Show Comments (
2
)
Comments are automatically closed two weeks after an article's initial publication. See our comments policy for more.
Edward McEnroe
10 years 4 months ago
The Question asked is: Will this prophet be heard in death as he was not heard in life?"  Has another prophet been heard in his death as he was heard in life named Jeshua of Nazareth. Some patterns of the conditioned way of thinking, believing, behaving and acting have't changed much in two Millenia. When will the human conscousness transcent. All my hopes. Peter G.
Beth Cioffoletti
8 years 4 months ago
The prophetic voice of MLK has yet to be heard. Dr. King is the American who most fully understood the concept of nonviolence, and most completely incorporated it into his life and vision. His life is gift and treasure to America’s soul. As with the writings of Thomas Merton, I most appreciate Dr. King’s later, and more mature writings. I think that his speech at Riverside Baptist Church, “A Call To Conscience” (April 4, 1967 – exactly one year before his assassination) is one of his best. He sees the connections between Militiarism, Racism and Poverty, and brings this to the American consciousness. Dr. King’s personal spirituality is rooted in non-violence. His last speech, given the night before he died, radiates his faith and trust. He was just 39 years old when he was killed. Dr. King was considered so “dangerous” that he needed to be assassinated (like Jesus). His legacy has been grossly watered down since he died. Like Jesus', his message is threatening to our way of life. Both MLK and Jesus were killed and then watered down.