Argentina vs. France: Whom should Catholics root for in the World Cup final? 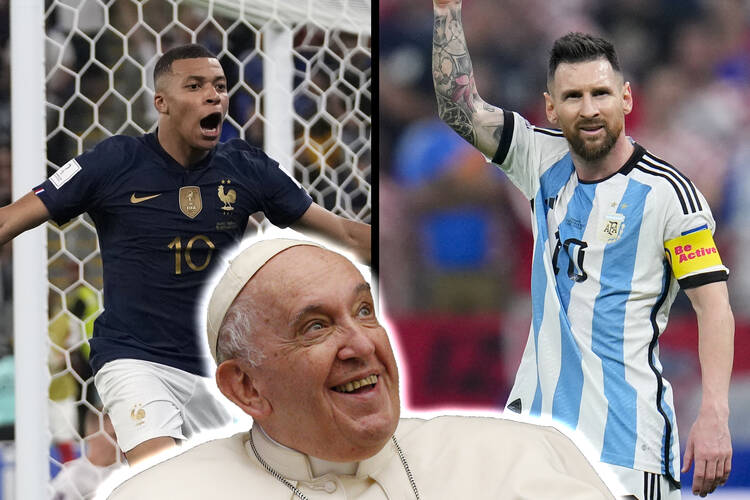 Sunday Mass attendees across Argentina this weekend can look forward to a short homily at the 11 a.m. liturgy. They might experience a quick Communion line, too, because it is not clear how many people will just stay home and pray instead: The World Cup final against France will be played in the evening in Qatar, meaning it begins at noon Sunday in Argentina. Keep it quick, Padre!

Having endured 36 years of World Cup drought, Argentina is ready. After several weeks of high drama on the pitches of Qatar (operatic performances of injury included) and several Cinderella stories come to naught (thank you anyway, Morocco, for an amazing run), Lionel Messi and his fellow Argentines will take on Kylian Mbappe and Les Bleus for all the glory in World Cup 2022.

American soccer fans—still unwilling to call it football—were justifiably proud of their own national team for advancing to the knockout round of 16 before losing to the Netherlands. Christian Pulisic is a national hero for his brilliant performance in the tournament, including scoring the only goal in a 1-0 U.S. victory over Iran despite a brutal injury to his, um, netherlands. We here at America immediately sought to determine if Pulisic is Catholic (tentative conclusion: he’s no left-footer, on the pitch or in the pew), so as to claim him as our own.

Both countries have had a Catholic-majority population for centuries, with France long being known as “the eldest daughter of the church.”

This raises another pressing question for Catholics, though: Who is our team in Sunday’s final?

Both countries have had a Catholic-majority population for centuries, with France long being known as “the eldest daughter of the church” and enforcing Catholicism as the official state religion from the sixth century until the French Revolution in 1789. Officially and sometimes violently secular in the centuries since, France still has a nominally Catholic majority today, though the churchgoing rate is something like 4 percent.

Catholicism was introduced to Argentina by Jesuit missionaries during the Spanish conquest of the region in the 17th century; massive immigration from Spain and Italy between 1870 and 1930 added as many as seven million Catholics to the population, including Pope Francis’ father and his grandparents, all of whom came from Italy. As late as 1960, more than 90 percent of the population identified themselves as Catholic, a number now down to 63 percent.

Pope Francis is of course a native of Argentina and a devoted fan of its national team, as well as a lifelong soccer fanatic. The 2019 movie “The Two Popes” even included a scene where Pope Emeritus Benedict XVI (Anthony Hopkins) and Pope Francis (Jonathan Pryce) watch Germany beat Argentina in the 2014 World Cup final. (Not likely. Francis doesn’t watch television, and Benedict doesn’t like sports.)

When push comes to shove, we always side with Pope Francis. Viva Argentina!

While he admits he was usually relegated to goalkeeper as a child, Francis still has a favorite local team (San Lorenzo, from Buenos Aires), and when Argentine legend Diego Maradona died in 2020, Francis sent his family a rosary. “On the field he was a poet,” said the pope, who met Mr. Maradona at the Vatican in 2014.

The pope has also met Mr. Messi, who visited Francis in the Vatican in 2015. In fact, after Francis was elected to the papacy in 2013, Mr. Messi promised he would dedicate the 2014 World Cup to him if Argentina won. (They didn’t.) Without a TV, Francis won’t see Mr. Messi play in this year's title game himself, but we have it on reliable authority that the Swiss Guard keeps him informed.

Mr. Messi is of course legendary for his ability to thread through defenses and for his big-game performances—the writer Jim Gavin once declared that “Lionel Messi sits at the left foot of God the Father”—and his stellar play in this tournament has only added to his reputation. But the last time these two teams met in the World Cup, it was the young French forward Kylian Mbappe who proved the hero, finding the back of the net twice in a 4-3 victory over Argentina and scoring four goals overall in France’s march to the championship in 2018. Otherwise, the two squads seem evenly matched, and oddsmakers have given France only the slightest edge. Mr. Messi is likely playing in his last World Cup, at age 37, so this will be his last chance to win; Mr. Mbappe already has one title, and at 23, as many as five more chances.

So who is America rooting for? Other than a good, clean game, of course, with the Golden Boot being given not for the “Most Valuable Player” but for “Most Inspirational” instead.

Our readers over the past nine years are already rolling their eyes at the question. Because you knew it already: When push comes to shove, we always side with Pope Francis.