With no TV, how does Pope Francis follow the World Cup? 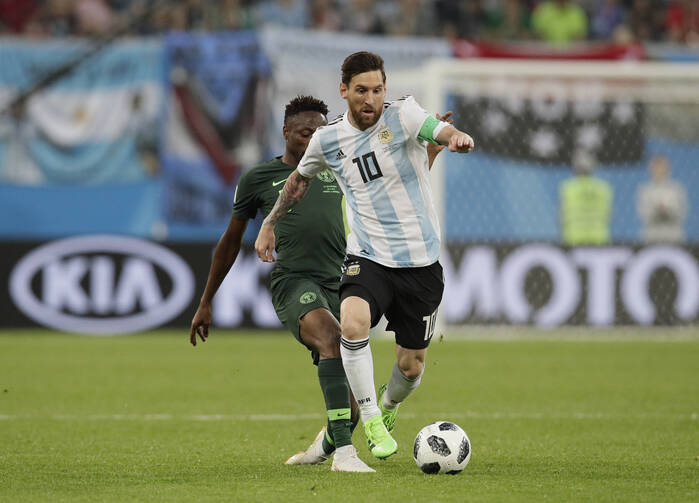 Argentina's Lionel Messi, front competes for the ball during the match between Argentina and Nigeria at the 2018 soccer World Cup in the St. Petersburg Stadium in St. Petersburg, Russia, on June 26. (AP Photo/Dmitri Lovetsky)

Though Pope Francis is a soccer fan, he was sleeping soundly on the night of June 26, when Argentina scored a goal in the last five minutes of a hard-fought game against Nigeria to win 2-1 and qualify for the next round of the 2018 World Cup, held this year in Russia.

He only learned about the Argentine victory early next morning, when he left his small apartment in the Santa Marta guesthouse to celebrate Mass in the chapel. Reportedly, he was given the good news by the Swiss Guard who had stood outside his door throughout the night. He smiled and graciously thanked his guardian angel for this information—and perhaps said a silent prayer of thanks to God for the victory he knows brings so much allegria to his compatriots.

The pope was given the good news about Argentina’s victory by the Swiss Guard who had stood outside his door throughout the night.

It is well known that Pope Francis has not watched television for many years; he took a vow decades ago not to do so. Nor does he listen to the radio. Nonetheless, sources confirm that he is always well informed, not only about the fortunes of the Argentine national team but also those of San Lorenzo, the Buenos Aires-based team he has supported since his childhood days. The Swiss Guards usually give him the results, but so do his secretaries and others who join him for breakfast, after Mass, in Santa Marta. Everyone seems anxious to keep him updated.

Pope Francis has met most, if not all, of the players of the Argentine team. He knows Lionel Messi, their star striker and one of the world’s best soccer players, though he admitted in an interview that he has never actually seen him play. Mr. Messi came to visit Francis in the Vatican in 2015. Two years earlier, the Argentine star rejoiced at Francis’ election as pope and promised he would dedicate the 2014 World Cup to him if his team won. Sadly, that did not happen.

The World Cup is the best kind of team play. Here’s why.
Travis Timmons

Next Saturday afternoon, on June 30, Argentina will play France in the hope of qualifying for the quarter finals. Francis will not watch this match either, but he is sure to learn the result before he goes to dinner that evening.

He knows the path to victory at the World Cup is an uphill one, particularly given the somewhat lackluster way Argentina has played up to now. But Francis would surely be delighted with a World Cup victory and the prospect of Mr. Messi bringing the players to visit him in the Vatican before returning home to Buenos Aires.

I get his "no TV" practice, but no radio as well? That's rough, especially for someone who completed the novitiate many years ago. When was the last time he went to a soccer match?

Our family has not had TV for a couple years and are a few thousand richer. If you google world cup one can find all the scores, standings and future matches. Argentina is a bust and Germany is out. Haven't missed a thing.

"Haven't missed a thing"?! How about actually watching the matches? Can you be a soccer enthusiast if you never see the sport played?

I have watched several soccer matches both in previous world cups and in other venues. The most common things I remember is the score is nearly always 0-0 and there is some player on the ground faking an injury trying to get a yellow card on his opponent. It is a fast game in the sense that the distance covered has doubled during a match in the last 35 years but even so, little happens but a constant back and forth. For the exceptional goals there are highlights.

I would definitely watch the Mexico- Brazil match but will be traveling during it. I would have to go to someone's house to do it if I were around.