What’s it like to play Pope Francis? An interview with Jonathan Pryce on ‘The Two Popes’ 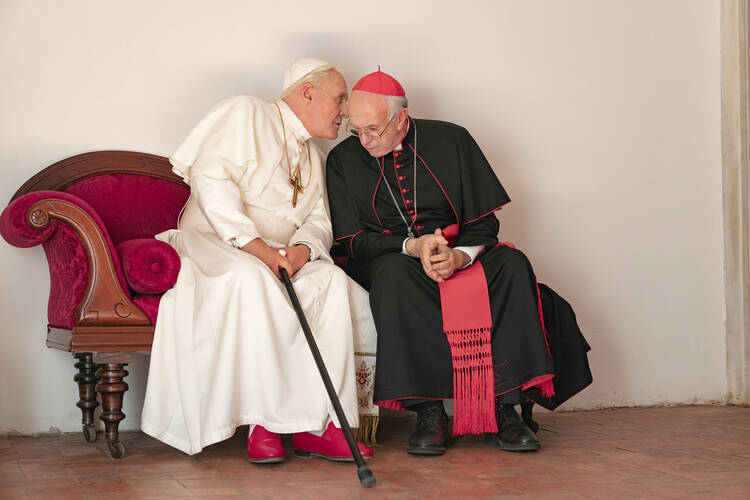 If you are a fan of HBO’s “Game of Thrones,” you probably remember thinking when you first saw the High Sparrow: Wow, that guy looks exactly like Pope Francis. That guy was Jonathan Pryce, a distinguished Welsh actor on the stage and screen. And it was a likeness that proved irresistible for the director of “The Two Popes,” now streaming on Netflix. In the film, Pryce plays Jorge Bergoglio, the archbishop of Buenos Aires, who has been called to Rome by Pope Benedict XVI (Anthony Hopkins), to discuss the latter’s decision to renounce the papacy.

We ask Pryce how he prepared to play the pope, whether the film changed his perception of the Catholic Church, and about his own spirituality.

“I’ve been asked: How did you build this character? I didn’t. He did, and I follow in his footsteps.”

In Signs of the Times, Pope Francis abolished the “pontifical secret” for cases of sexual abuse; how are advocates and victims reacting? Also at the Vatican, the Peter’s Pence collection comes under scrutiny for potentially misleading donors. And in U.S. church news, Gwen Stefani needs an annulment, a survey of how the length of homilies compare to sermons in other denominations and a bishop opens up about mental illness.

Pope Francis abolishes the pontifical secret for sexual misconduct cases involving clerics
Is the Vatican misleading donors? Peter’s Pence, explained.
Blake Shelton and Gwen Stefani Are Ready to Get Married But It "Isn't Possible Currently" Because of Her Faith
An Analysis of Online Sermons in U.S. Churches
Bishop Conley announces medical leave of absence from Lincoln diocese
https://www.americamagazine.org/faith/2019/12/09/us-catholic-priests-beset-overwork-isolation-and-scandals

Jesuitical
@jesuiticalshow
Show Comments ()
Join the conversation: Login or create an account
Before you can comment, you need to update your profile to include your first and last name, as required in our comments policy. Then reload this page and you'll be set up for commenting. Update your profile
Show Comments ()
Comments are automatically closed two weeks after an article's initial publication. See our comments policy for more.