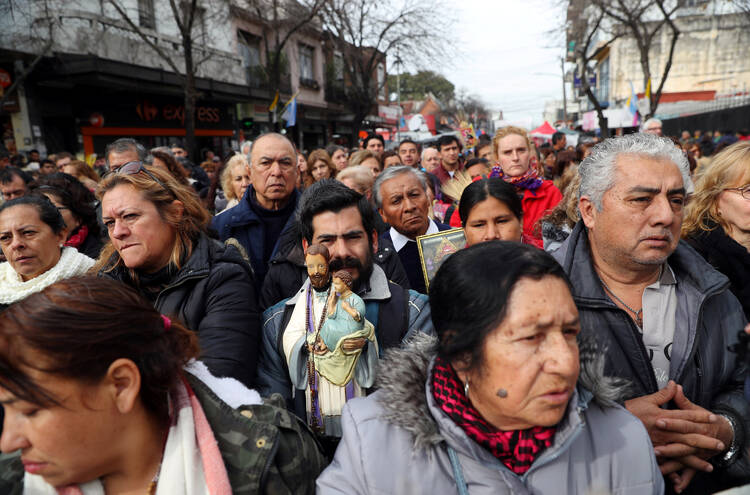 Worshippers pray during a Mass in honor of of St. Cajetan, the patron saint of labor and bread, during feast day celebrations for the saint on Aug. 7, 2018, outside St. Cayetano Church in Buenos Aires, Argentina. (CNS photo/Marcos Brindicci, Reuters)

A recent national survey reports that the number of Catholics in Argentina is declining while the proportion of people without a religion is increasing, but analysts consider that the still-high percentage of people who believe in God—82 percent—is a sign that the church has an opportunity to prevent further losses in the South American country.

The second study conducted by the National Scientific and Technical Research Council of Argentina (Conicet, in Spanish) concerning creeds and religious attitudes was released in November 2019 and allowed the first comparison of historical data on such themes. Before the first edition was concluded in 2008, there was no reliable demographic information on religion. Argentina’s official census ceased to include questions about it in 1960.

Among other indicators presented in the survey, the accelerated reduction in the size of the Catholic flock in Argentina confirmed an overall Latin American trend: Between 2008 and 2019, the proportion of Catholics in Argentina dropped from 77 percent to 63 percent. In 2014, a survey from the Pew Research Center reported that 69 percent of the Latin American public identified as Catholic; in the 1960s, at least 90 percent of the continent professed Catholicism.

Juan Cruz Esquivel is a professor at the University of Buenos Aires and a Conicet researcher. He was part of the team that conducted the study. “The 1960 census showed that Catholics represented 90 percent of the population in Argentina,” he said, noting the figure dropped by almost 14 percentage points by 2008, “a period of 48 years,” and experienced another 14 percentage-point drop by 2019, this time over a period of only 11 years.

The study has also tracked the significant growth in the number of people without any religion, described as “nones” in the United States. This segment of the population increased from 11 percent in 2008 to 19 percent in 2019.

Some of the Catholic losses in Argentina can be attributed to the rise of evangelical Protestant churches. Evangelicals rose from 9 percent of the population in 2008 to 15 percent in 2019. They have gained ground especially among the young and poor. The highest proportions of evangelicals are found among people aged 18 to 29 years (20 percent) and among people who have no formal education (26 percent).

Emilce Cuda, a professor at the Pontifical Catholic University of Buenos Aires and an advisor of the Latin American Episcopal Council, believes evangelical church leaders have found a powerful message to share during Argentina’s recent economic troubles through their emphasis on the so-called prosperity gospel. “The sociopolitical situation in Argentina has seriously deteriorated over the past four years [during the administration of President Mauricio Macri],” she said, “and the poor paid the price.”

They have established grassroots outreach in Argentina’s slums, she said, promoting a “whole social ideology that justifies the idea of richness as a virtue,” devoid of a critical social analysis and emphasizing a connection between success and evidence of God’s grace.

For Ms. Cuda, the Catholic Church is at a disadvantage in this mode of outreach to the poor, obliged to fight against the ideological current of radical individualism that is becoming popular in contemporary Argentina. “The Catholic Church is 2,000 years old and knows that social problems are not solved by praying, but with structural changes,” she said.

But the growth of evangelical churches and other Protestant denominations among segments of low-income Catholics is only one part of the demographic dynamic in Argentina. The Conicet study has also tracked the significant growth in the number of people without any religion, described as “nones” in the United States. This segment of the population increased from 11 percent in 2008 to 19 percent in 2019.

The trend cannot be strictly interpreted as a surrender to secularization. “The fact that those people declared they didn’t have any religion doesn’t mean they have no beliefs.”

Gustavo Morello, S.J., a sociologist at Boston College, said the growth of the religiously unaffiliated connects to a broader crisis of loss of trust in traditional institutions in society, including political parties. “Religion is not isolated,” he said. “Several [societal] institutions used to confer identity to people, but this is changing now,” he said.

Mr. Esquivel said that the weakening of the social role of historical institutions like the Catholic Church is particularly evident among the young. The proportion of people who do not affiliate with any religion now reaches as high as 25 percent among Argentina’s 18- to 29-year-olds.

Contemporary youth all over the world have come of age in an environment of accelerating atomization, according to Mr. Esquivel. They establish “fragmented and diversified bonds” across multiple sources, “including social networks,” he said, adding, “The Catholic Church is a traditional and bureaucratic institution, and it has difficulties reaching young people.”

But that trend cannot be strictly interpreted as a surrender to secularization, said Father Morello. “The fact that those people declared they didn’t have any religion doesn’t mean they have no beliefs,” Mr. Esquivel said.

The fact that the current pope is a native son has not appeared to provide a significant boost to church membership in Argentina.

“In Latin America as a whole, 90 percent of the people believe in God, even though Catholicism is declining in several countries,” said Father Morello. “So, it’s not so much about secularization, but religious transformation.”

Gradual social changes connected to the configuration of families, the social role of women and gender diversity are also having an impact on belief.

Father Morello argued that religious institutions in Argentina still respond mainly to an ideal of traditional families. “But now this model includes only a fraction of the number of families that it used to encompass decades ago,” he said.

He noted, for example, that more than 30 percent of Argentinian households are now headed by women. But “we don’t have strategies to properly accompany single mothers,” Father Morello said.

Women’s issues may be fundamental in understanding the church enrollment crisis. As feminist sentiment and its critique of the social status of women gathers strength in Argentina, Catholicism has appeared an outdated, sexist institution to many.

“To a great extent, the church doesn’t know what to say on themes like the new social role of women and gender diversity,” Father Morello said. “I’m not evaluating those phenomena as good or bad; I’m only saying that we don’t know how to deal with them.”

Indeed, a difficult dialogue between the church and several elements of contemporary Argentinian society seems to be driving the estrangement of many Catholics. Eduardo Rodríguez is a philosophy teacher and a father of three. For 30 years Mr. Rodríguez had been an active member of different pastoral groups at his parish and at the Catholic school where his children studied.

“To a great extent, the church doesn’t know what to say on themes like the new social role of women and gender diversity.”

“But then I divorced my wife,” he said. “Suddenly I became someone who should be judged and criticized. I saw myself alone,” he told America.

The experience led him to view the church more critically. “I now consider myself to be a spiritual person, but I declare myself to be agnostic. The church doesn’t know how to address the new social demands” and retains an inflexible hierarchical structure “that is really difficult to maintain nowadays,” he said.

In a traditionally liberal nation, Ms. Cuda said, where a clear separation of church and state is supported, many saw the intervention of Catholic clergy—including the Argentinian-born Pope Francis—in the debate concerning abortion legislation in 2018 as inappropriate. That year, a campaign representing many segments of Argentinian society united in support of abortion rights (currently only allowed in instances of rape or if a mother’s life is in danger) ended in defeat in the Senate. Media suggested that Pope Francis influenced the process. On March 1, Mr. Fernández said that he intends to bring a new bill before the Argentine Congress to legalize abortion.

The fact that the current pope is a native son has not appeared to provide a significant boost to church membership in Argentina, according to the Conicet survey. “There’s an overall indifference of the Argentinians concerning the pope’s nationality,” said Mr. Esquivel.

According to Fathern Morello, who has conducted studies in the past on Argentinians’ impressions of the pope, Argentinians generally approve of the pope’s criticism of the global economic order and of his defense of the poor, but strongly object to any possible interference in Argentinian politics. According to the Conicet report, only 8 percent of Argentinians said their religiousness had increased since Francis became pope; 82 percent said the pope has made no difference.

Chile is reeling from protests. Where is the Catholic Church?
Eduardo Campos Lima

Those contradictory perceptions may be at the root of odd outcomes in Argentina like a large presence of women wearing green bandanas—the most visible symbol of the feminist, pro-abortion campaign of 2018—during a Mass celebrated in Luján, near Buenos Aires, two days before the transition of power from Mr. Macri to new President Alberto Fernández.

“This is a signal that being in favor of abortion or same-sex marriage doesn’t necessarily represent an estrangement from the church,” said Ms. Cuda.

Catholic decline in Argentina should not be seen in “administrative terms,” she argues. “We Catholics defend human dignity and structural changes which can secure it. Today, many Catholics occupy important positions in society and share such values.

“[Argentinian] labor unions continue to be deeply Catholic. These are signs of the essential presence of the church in society,” she said.

Among other outcomes noted by the report: 46 percent now say religious education should not be taught in public schools, compared with 27 percent in 2008. In fact, Argentinians increasingly view the whole notion of state funding of religious institutions skeptically. In 2008, 51 percent said that the Argentine state should finance all religious denominations, but by 2019 that support dropped to just 28 percent.