Remembering priest and historian Thomas Shelley: ‘an intellectual who wished the church were more intellectual’ 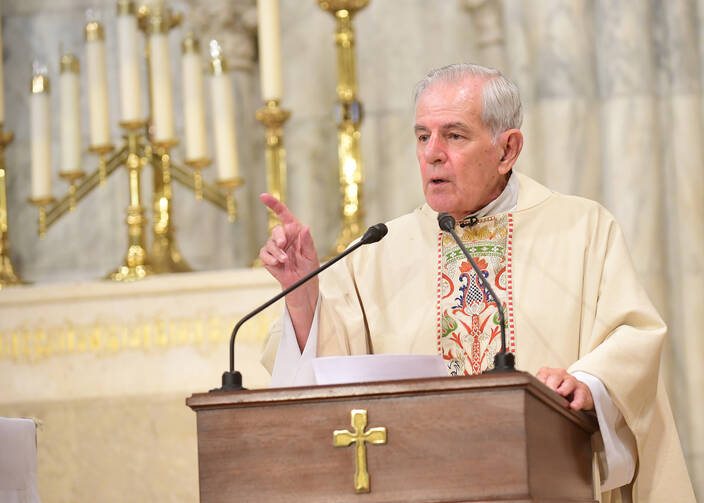 “It is bad form to criticize a living pope. But it’s no sin to praise a dead one.” Msgr. Thomas J. Shelley delivered this sage advice with a wink in his graduate seminar on the 19th and 20th century papacy at Fordham University in the spring of 2005. It was, not coincidentally, just a few weeks after the Catholic Church had buried one pope and elected another, and the learned historian took—as he always did—the long view. It served him well in life and in his career, including the many years he taught at Fordham.

I was a student in that seminar, as well as in another he taught on American Catholicism, and I learned much from him both in the classroom and out. His death yesterday was not entirely unexpected—he was 85—but it still represents a great loss to the church, to Fordham and to his friends and family, as well as to the world of Catholic historians.

Born in 1937 in the Bronx, Shelley attended St. Joseph’s College (Dunwoodie) and was ordained a priest of the Archdiocese of New York in 1962, after which he taught at Cardinal Spellman High School in the Bronx. He later earned his doctorate in church history from The Catholic University of America in 1987. He taught church history at Dunwoodie from 1986 to 1996, and at Fordham University until his retirement in 2013.

Father Thomas Shelley came to class with no computer, but with a hefty supply of multicolored pens and transparencies filled with handwritten notes.

He was charmingly retrograde in his teaching materials even into the 21st century, coming to class with no computer, but with a hefty supply of multicolored pens and transparencies filled with handwritten notes, and then firing up the overhead projector and beginning his lecture.

Shelley was also a prolific author, penning numerous academic works on U.S. Catholic history as well as textbooks and instructional aids. He was also the author of both Fordham: A History of the Jesuit University of New York: 1841-2003 and The Bicentennial History of the Archdiocese of New York.

The subject matter of those two books make it clear that Shelley was a company man, ecclesially speaking, willing to write institutional church histories while also pursuing his own interests. But he was also an intellectual who wished the church were more intellectual. Nowhere is that more clear than in his many essays and book reviews for America over the years, including a 1995 essay on the Rev. John Tracy Ellis and American Catholicism.

Shelley’s article marked the 40-year anniversary of Msgr. Ellis’s controversial 1955 essay, “American Catholics and the Intellectual Life,” in which the well-regarded priest and scholar criticized U.S. Catholic culture for its failure to produce thought leaders and scholars. The nation’s more than 200 Catholic institutions of higher learning, he wrote, were churning out businessmen, attorneys and medical professionals by the boatload, but “the Catholic Church in America has counted for astonishingly little in the formation of the American intellectual climate.”

Why? The reasons were many, Shelley noted, and Ellis was not shy about pointing them out: anti-intellectualism. An inferiority complex. An emphasis in Catholic schools on moral formation at the expense of intellectual rigor. A focus on brick-and-mortar projects. In another essay 11 years later, Shelley wrote, Ellis quoted a “still relatively unknown German theologian, Joseph Ratzinger, that what the church needed ‘are not adulators to extol the status quo, but men whose humility and obedience are no less than their passion for truth.’”

Another of Shelley’s powerful essays for America was “A Somber Anniversary,” a 2008 account of the shuttering of The New York Review a century before. Conceived by two diocesan priests from the faculty of St. Joseph’s Seminary, John F. Brady and Francis P. Duffy (who became a famous military chaplain in World War I and the namesake of “Father Duffy Square” in Times Square), as “a pioneer effort to provide American Catholics with a journal that would keep them abreast of the latest developments in Catholic scholarship in the United States, Great Britain and Europe,” The New York Review began publication in 1905 and soon gathered recognition as a leading journal of Catholic thought.

James Driscoll, S.S., in 1908: “Nothing so violent and drastic as the recent curial documents has appeared on the part of the Vatican authorities since the days of the Inquisition."

Unfortunately, the rise of the journal coincided with the modernist crisis in the Catholic Church, a Europe-centered campaign by some within the church to hunt out a whole new amalgam of heresies, including attempts “to use the critical tools of contemporary scholarship to present the Christian message in a modern idiom,” as Shelley more sympathetically put it. Chief targets were Scripture scholars and anyone who could be tarred with the brush of “Americanism.” (America itself was later included in this group.)

The crisis came to a head in the summer of 1907 with the publication by the Holy Office (now the Congregation for the Doctrine of the Faith) of “Lamentabili Sane Exitu” and then the encyclical “Pascendi Dominici Gregis” by Pope Pius X, “who condemned modernism in the harshest terms as an evolutionary philosophy that threatened to deprive Christianity of any immutable truths.” Both documents injected new energy into what Shelley called “the heresy hunters,” and both St. Joseph’s College and The New York Review became prime targets.

The seminary rector, James Driscoll, S.S., recognized what was soon to come. “Nothing so violent and drastic as the recent curial documents has appeared on the part of the Vatican authorities since the days of the Inquisition,” Shelley quotes him. “I can compare the crisis to nothing but a cyclone during which people must simply make for the cellar.” By June 1908, the review had ceased publication. Shelley noted that the initial reason given—a lack of subscribers—was somewhat contradicted by the editors’ assertion that “at its inception three years ago the editors promised to present the best work of Catholic scholars at home and abroad on theological and other problems of the day. It is the keeping of that promise, not the breaking of it, that is the cause of the suspension of the Review.”

Both essays by Shelley are fine examples of a historian’s craft, bringing past examples and parallels to bear on the analysis of contemporary situations. What he wrote about the work of John Tracy Ellis was true of his own life and work as well. “Forty years ago that essay provoked a good deal of soul-searching among American Catholics,” Shelley concluded. “It is well worth reading today, and will continue to be so, at least as long as there are Catholics who still believe that a love of learning for its own sake is an authentic Christian virtue.”

Both essays by Shelley are fine examples of a historian’s craft, bringing past examples and parallels to bear on the analysis of contemporary situations.

Our poetry selection for this week is “Four Freedoms,” by Carolyn Oliver. Readers can view all of America’s published poems here.