A Somber Anniversary: A century ago, a promising American theological journal fell victim to the modernist crisis.

A Somber Anniversary: A century ago, a promising American theological journal fell victim to the modernist crisis. 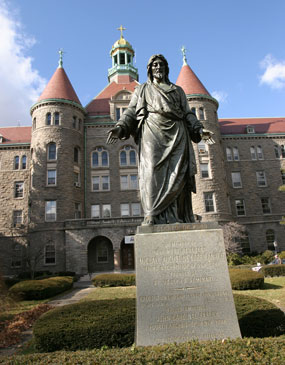 Four American archdioceses celebrate their bicentennial this year: Boston, Louisville, New York and Philadelphia. They share the same birthday, April 8, 1808, when Pope Pius VII created them from the original American diocese, Baltimore. All four are commemorating this anniversary year with public celebration and thanksgiving. Another anniversary will occur in New York in June, but it will be a cause for regret rather than celebration. It is likely to pass unnoticed by all except a handful of people, even though its implications reach far beyond the boundaries of the Archdiocese of New York: the centennial of the demise of a bimonthly Catholic periodical called The New York Review.

The New York Review was a pioneer effort to provide American Catholics with a journal that would keep them abreast of the latest developments in Catholic scholarship in the United States, Great Britain and Europe. It originated with two diocesan priests, Francis P. Duffy and John F. Brady, from the faculty of St. Josephs Seminary, the seminary of the New York Archdiocese located north of the city in the Dunwoodie section of Yonkers. They brought their proposal to the Sulpician rector, Father James Driscoll, who endorsed it enthusiastically. The three then asked the approval of Archbishop John M. Farley, who assured them that such a review was exactly what he wanted at his seminary. The exaggerated restrictive policy of the ecclesiastical authorities, Farley said, only succeed[s] in stifling all initiative on the part of the ablest and best-disposed Catholic scholars.

The first issue appeared on June 21, 1905, a substantial volume of 132 pages. The editors described their purpose as primarily apologetic and had even considered naming the journal The Apologist or The Apologetic Review. The subtitle identified it as A Journal of the Ancient Faith and Modern Thought. Each issue contained several articles, book reviews and a valuable section called Notes, written at least partially by Duffy, which provided a brief survey of recent works by Catholic scholars throughout the world.

As promised in the prospectus, the journals approach was constructive rather than polemical, and the editors obviously tried to avoid iconoclasm. For example, two articles by Francis Gigot on the last 27 chapters of the Book of Isaiah presented the traditional analysis of authorship, followed by the then-modern theories. Both opinions are beset with numerous and great difficulties, conceded the author, and, on that account, the readers of The New York Review cannot expect us to define what is the true position. Nonetheless, the progressive tone of the journal was unmistakable. The Bible nowhere says that Moses wrote the Pentateuch, Joseph Bruneau stated boldly in another article. Nor should the authority of Our Lord be adduced in such matters, he added, as He did not pretend to solve for us literary problems.

About half the articles were written by members of the Dunwoodie faculty like Gigot and Bruneau; the other half by such high-caliber scholars as Wilfrid Ward, George Tyrrell, Vincent McNabb, O.P., Joseph Turmel, M. J. Lagrange, O.P., Henri Brémond, Pierre Battifol and Walter McDonald. The contribution of the Dunwoodie faculty was indispensable. Driscoll himself was a well-respected Scripture scholar, as were two of his French Sulpician confreres, Francis Gigot and Joseph Bruneau. All three had been educated in Rome and Paris, where they had been exposed to new currents in Catholic scriptural studies. Francis Duffy had spent several years at The Catholic University of America as a student of Edward Pace, a psychologist trained in Leipzig. John Brady had earned an M.D. degree before entering the seminary. Another notable member of the Dunwoodie faculty, Gabriel Oussani, was a Chaldean Catholic born in Baghdad who had studied Semitic languages and biblical archaeology at Johns Hopkins University.

Dunwoodie had been established only nine years earlier as the New York diocesan seminary, with a mixed faculty of Sulpician and diocesan priests. By 1905 it possessed the strongest faculty of any Catholic seminary in the United States. In the opinion of Msgr. John Tracy Ellis, it was second only to The Catholic University of America as a center of American Catholic intellectual life and the ideal place from which to launch a scholarly journal like The New York Review. The first issue received a favorable reception from the Catholic press, enhanced Dunwoodies reputation and left Archbishop Farley beaming with pride. However, there was one interested observer who was anything but pleased with the success of The New York Review. He had opposed the project from the beginning and predicted that it would end in disaster.

Storm Clouds of the Modernist Crisis

The person in question was Edward Dyer, S.S., the first rector of Dunwoodie and by 1905 the vicar general of the Sulpicians in the United States. Dyer was no obscurantist; in fact, he shared the progressive views of his friend James Driscoll. He was keenly aware, however, that in Europe the storm clouds were gathering that would soon lead to the modernist crisis and a crackdown by the ecclesiastical authorities on the kind of scholarship represented by The New York Review.

Dyer warned Driscoll not to rely on Archbishop Farley to protect The New York Review and asked him to consider what attitude the archbishop would take if a whiff of disapprobation were wafted from Rome. Meanwhile, the Dunwoodie Sulpicians became involved in a bitter dispute with their superiors in Paris, who attempted to censor the review and their other writings. In January 1906 five of the six Sulpicians resigned from the Society of Saint Sulpice. Farley welcomed them into the archdiocese and retained them on the faculty of Dunwoodie.

Freed now from Sulpician censorship, The New York Review prospered for the next 18 months with Gigot alone contributing over a dozen articles. Then on July 3, 1907, the modernist crisis broke with the publication by the Holy Office (as the Congregation for the Doctrine of the Faith was then known) of Lamentabili Sane Exitu, a condemnation of 65 propositions culled from unidentified modernist authors. It was followed two months later by the encyclical Pascendi Dominici Gregis of Pope Pius X, who condemned modernism in the harshest terms as an evolutionary philosophy that threatened to deprive Christianity of any immutable truths. There was good reason for the popes concern. Today even those who regret the apocalyptic tone of Pascendi can admit that it was a skillful summary of ideas that were circulating among some Catholic scholars.

The Catholic modernism of the early 20th century was a many-splendored phenomenon that meant different things to different people, more a tendency or a methodology than the organized movement it was perceived to be in Rome. Above all it was a recognition of the inadequacy of the desiccated Neo-Scholasticism of the day and an attempt to use the critical tools of contemporary scholarship to present the Christian message in a modern idiom.

Duffy liked to quote Cardinal John Henry Newman, saying that one should first learn to shoot around corners before hoping to convert someone with a syllogism. It is ruin and shame for us, Duffy admitted, if our people satisfy their mental hunger with husks and their thirst with lees because the wine and corn are locked in inaccessible storehouses. The old faith does not change and does not need to change, he explained, but we must find new approaches to it and new ways of presenting it. If these words sound familiar, it may be because Pope John XXIII used almost exactly the same language in his often-quoted address at the opening of the Second Vatican Council in October 1962. Duffy realized the difficulty of presenting age-old truths in a modern idiom. To do this, he recognized, we need men of faith, men who will not call the counsel of their own little prejudices sacrosanct and...are not content to live lazily on scraps of begged opinions. They must, he added, be men of sufficient courage to withstand the criticism of those who suspect a priori every idea that has not had the test of time.

Prime Targets for the Heresy Hunters

The renowned Louvain church historian Canon Roger Aubert identified three varieties of turn-of-the-20th-century Catholic modernism. Some developments, said Aubert, were completely unobjectionable and caused no controversy at all. Other developments were basically sound but frightened conservatives because of the provocative way in which they were presented. Still other developments, said Aubert, ceased to have any Christian content and were plainly incompatible with Christian orthodoxy. Unfortunately, Pascendi collapsed all three varieties of modernism into the third kind and tarred them all with the same brush of heterodoxy. It also touched off a panic-stricken campaign to ferret out modernist moles within the Catholic community that degenerated into a witch hunt.

Dunwoodie and The New York Review were prime targets for the heresy hunters. The editors published the full texts of both Lamentabili and Pascendi. They claimed that the papal documents condemned only extreme views and cautioned readers not to extend it to include anyone who has ever studied biology or Hebrew. Driscoll quickly realized the full dimensions of the integralist reaction, however, as the crusade against modernism came to be called. Nothing so violent and drastic as the recent curial documents has appeared on the part of the Vatican authorities since the days of the Inquisition, he said. I can compare the crisis to nothing but a cyclone during which people must simply make for the cellar.

To make for the cellar was the only option left for many Catholic scholars during the next 30 or 40 years. Only two issues of The New York Review appeared after Pascendi, and the journal ceased publication entirely in June 1908. The editors claimed that a lack of subscribers forced them to suspend publication and that the review had never been the object of formal ecclesiastical censure. While that statement was technically correct, the editors came closer to the truth when they wrote: At its inception three years ago the editors promised to present the best work of Catholic scholars at home and abroad on theological and other problems of the day. It is the keeping of that promise, not the breaking of it, that is the cause of the suspension of the Review.

Driscoll, Brady and Duffy were made pastors, and Duffy subsequently became a much-decorated hero as chaplain to the New York 69th Regiment in World War I. Few people who pass his statue today in Times Square are aware of his earlier role as a theologian. Bruneau remained a Sulpician and was transferred to St. Marys Seminary in Baltimore. Gigot and Oussani continued to teach at Dunwoodie, but they never published anything again.

The modernist crisis was a sad chapter in the history of 20th-century Catholicism. It was mainly a European phenomenon, but its impact was especially severe in the United States, where it squelched the first fruits of a modest but promising Catholic intellectual development symbolized by The New York Review. Anniversaries should always be remembered, but not necessarily as occasions for celebration. Sometimes they are reminders of mistakes to be avoided.

This article also appeared in print, under the headline “A Somber Anniversary,” in the March 31, 2008, issue.