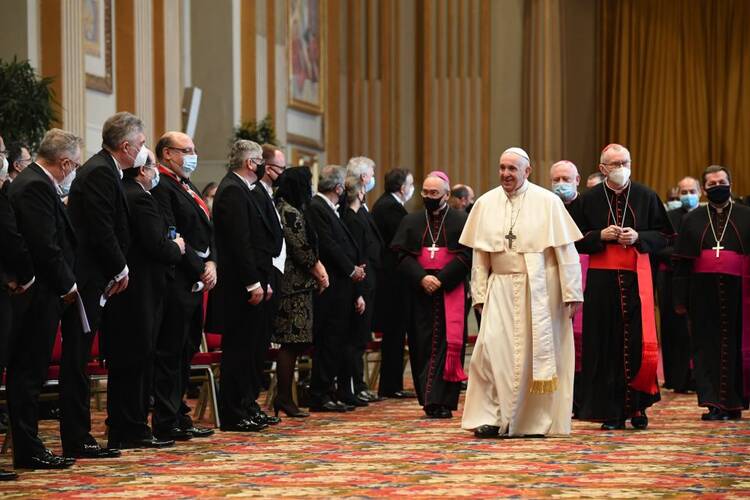 Pope Francis with diplomats accredited to the Holy See during an audience at the Vatican on Feb. 8, 2021. (CNS/Vatican Media)

Pope Francis’ responses to the Russia-Ukraine war have been loudly and widely criticized: He fails to name Russia as the aggressor, critics say, and inaccurately blames NATO for Russia’s invasion. His attempts at peacemaking—as when he invited a Russian woman and a Ukrainian woman (who, nota bene, were already friends) to lead one of the Good Friday Stations of the Cross together—put Ukrainians in an awkward position and seemed to betray the pope’s naïveté about the situation.

What these criticisms miss, though, is the diplomatic framework within which Francis is making these decisions, one that dates back to papal representatives at Constantine’s Council of Nicaea in 325 A.D., and has been honed over the centuries, outlasting some of history’s greatest empires. It is an approach that confounds and frustrates because it does not operate from any economic or military interest, and because its primary goal is peace through dialogue, which runs counter to the complex dance of pressures and negotiations that nation-states use to jockey for power on the global stage.

Vatican diplomacy dates back to papal representatives at Constantine’s Council of Nicaea in 313 A.D., and has outlasted some of history’s greatest empires.

Victor Gaetan expertly introduces readers to the history of this approach, and to how Pope Francis has employed it, in his book God’s Diplomats: Pope Francis, Vatican Diplomacy, and America’s Armageddon. An experienced international correspondent who has reported for Catholic News Service, the National Catholic Register, Foreign Affairs and America, Gaetan bases his book on extensive interviews and research, including documents from the Vatican archives and from WikiLeaks.

The chapter on the Holy See’s diplomacy in Kenya, in particular, pieces together breadcrumbs of information to tell the story of how, with a push from the pope at his 2015 visit, Catholics were able to convince President Uhuru Kenyatta and former Prime Minister Raila Odinga to commit to collaboration, thereby ending a yearslong political standoff. This could not have been accomplished without the nation’s bishops working together despite their ethnic divisions; nor without various Catholic charities earning the church trust among Kenyans; nor without Catholic parliamentarians who, Gaetan reports, ghostwrote “significant parts” of the commitment between Kenyatta and Odinga, “Building Bridges to a New Kenyan Nation.” Gaetan points out that the document takes its name from one of Pope Francis’ guiding diplomatic principles: Build bridges, not walls.

Gaetan’s other case studies in the book have already proven prescient: The first examines how Rome was able to keep open its relationship with Moscow through the 2013 Maidan Uprising in Ukraine, a relationship that now, with Russian Orthodox Patriarch Kirill’s endorsement of President Putin’s invasion of Ukraine, is again under threat. Likewise, the chapter on the church’s peacemaking efforts in South Sudan, including the iconic image of Pope Francis kissing the feet of that country’s warring leaders, provides essential background information for the pope’s now-postponed visit to that newest African nation.

In the first part of the book, which precedes the case studies, Gaetan distills 17 centuries worth of diplomatic history into a 100-page introduction to the key operating philosophies of Vatican diplomacy. “It’s almost too obvious to mention yet remarkably significant,” Gaetan writes, that “the Holy See has neither economic nor military interests. It’s easier to be helpful to foreign colleagues when no material competition exists.” Why is it the Vatican’s mission to be helpful to foreign colleagues? Because, he writes pithily, peace is the “raison d’être of God’s diplomacy.”

Why is it the Vatican’s mission to be helpful to foreign colleagues? Because peace is the “raison d’être of God’s diplomacy.”

Later, he examines what makes Pope Francis’ unique pastoral approach fuse particularly well with the ideals of dialogue, human development, religious freedom and the common good that have historically animated Vatican diplomacy. Gaetan examines Francis as “manager, missionary, and mystic,” pointing out how the pope’s experience as religious superior of a Jesuit province during Argentina’s Dirty War and then as Archbishop of Buenos Aires prepared him to clean up financial corruption and navigate volatile political situations while focusing the missionary work of his priests on the needs of the marginalized.

A powerful spiritual vision undergirds these practical tasks of government, Gaetan writes: Francis’ “conviction that Catholicism allows opposing thoughts to be held together in tension: the universal and the particular, God and man, grace and freedom” supports his vision of a unity in “reconciled diversity” through which no one emerges a winner or loser—an approach key to diplomatic negotiations.

Less obvious may be another of Francis’ key spiritual and diplomatic beliefs: “Time is greater than space.” Francis—and the Vatican—are willing to be patient, “to work slowly but surely, without being obsessed with immediate results” (“The Gospel of Joy,” No. 223).

Gaetan examines how these ideas have played out practically throughout the Francis pontificate, painting along the way a picture of Vatican diplomacy as a well-oiled machine, incredibly discreet but extremely knowledgeable, working around the clock with the commitment one would expect from a group of diplomat-clerics with no family responsibilities and the conviction that their work is a mission from God.

“Dialogue is a risk,” writes Gaetan, quoting Pope Francis. “But I prefer the risk to the sure defeat of not talking.”

Gaetan also contextualizes some of the biggest international gestures of the Francis pontificate—for example, when he unexpectedly climbed down from the popemobile to pray at the wall dividing Bethlehem from Jerusalem. “For Francis,” Gaetan writes, “lofty thoughts must land—in expressive gestures and acts of solidarity; in the practice of talking, walking, eating and being with others; in joint agreements rather than proclamations. That’s what we see from him, step by step, in his stabilization of relationships in the Middle East.”

Despite featuring “America’s Armageddon” in the title, Gaetan does not delve much into the significant frustration Pope Francis and the Vatican’s diplomatic corps have caused in Washington, D.C. This is my only significant criticism of the book: While Gaetan takes up the question in the book’s first 15 pages, I would like to have found a more comprehensive treatment of how the approach of this “manager, missionary, and mystic” is viewed in the United States, particularly after so many interesting case studies.

One situation in which Francis’ approach has been deeply unpopular among some U.S. officials is the Vatican’s controversial deal with China on the appointment of bishops. Former Secretary of State Mike Pompeo famously published a harsh criticism of Vatican-China dialogue on the eve of his visit to the Vatican. While that move may have won Pompeo political points in the United States, it cast a shadow over his meeting with Vatican Secretary of State Cardinal Pietro Parolin. Gaetan provides a fascinating overview of the approaches past popes have taken to dialogue with the Communist superpower, noting that even the anticommunist crusader John Paul II did not end dialogue with China after the 1989 massacre in Tiananmen Square.

“If there is one country that similarly preoccupied John Paul II, perplexed Benedict XVI and then engrossed Francis, it is China. Clarity and consistency in his diplomatic approach brought Francis the farthest in defining a modus operandi with Beijing,” writes Gaetan. But, as in many cases of the Vatican’s long-game, dialogue-first diplomacy, “The fact that it has required negotiating with a regime some consider an enemy has delivered plenty of daggers as a result.”

“Dialogue is a risk,” writes Gaetan, quoting Pope Francis. “But I prefer the risk to the sure defeat of not talking.”

Correction: An earlier version of this article stated that the Council of Nicaea was in 313 A.D. It was in 325 A.D.

This article also appeared in print, under the headline “When popes play peacemaker,” in the October 2022, issue.