Reviewing 'A Man for All Seasons': America on the original play and the 1966 film 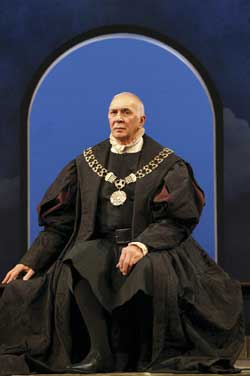 While the Broadway theatre generally is mediocre at best, and too often meretricious or nauseous, it occasionally rises to maturity. Such occasions were last seasons Becket, The Devils Advocate and Emmanuel, the beautiful Nativity play at the Gate. So far, the present season has given us Gideon, a biblical drama, and a portrait of St. Thomas More in A Man for All Seasons (at the Anta).

Sir Thomas More was one of the outstanding men of Christendom—scholar, author, lawyer, member of Parliament, judge and Lord Chancellor. His sovereign was Henry VIII, who hoped his chancellor would find ecclesiastical reasons for annulling the kings marriage with Catharine of Aragon.

In a pragmatic sense, the king did not need Mores endorsement. Cranmer and Cromwell had already assured him that Church law afforded ample grounds for annulment. But Henry was a canny monarch and had no illusions about the motives of such sycophants. He wanted Mores support for its prestige value. The chancellor was learned in both canon and secular law; his moral and intellectual stature was so large that his opinion would make the kings case stronger in ecclesiastical courts, and swing some weight with the Pope.

We know from history that Henry VIII was willful, capricious and cruel, a man modern psychiatry would label oversexed or undersexed—in either case a sadist. When More refused—or, more accurately, declined—to go along with the annulment business, he began to live on borrowed time. He was fully aware of his peril, but all the kings axmen could not shake his loyalty to his Church.

Robert Bolts drama is a portrait of More living in the shadow of death. In a program note the author says: "All the events essential to the action of his life during the period covered are present in the play, and none of the events essential to the action of the play is entirely my own invention." That would indicate a historical drama or a documentary play. The focus of A Man for All Seasons, however, is not history but on a mans character and his fortitude in his faith. History only provides background and atmosphere for his prolonged ordeal.

We see Sir Thomas, knowing himself a doomed man, trying desperately to avoid an open break with the king. More loved his daughter and his friends, and he was in love with his wife and in love with life. He had no thirst for martyrdom and probably never dreamed he could deserve it. He did not go to the scaffold joyously but dragged his feet every inch of the way. He was just quietly determined not to go against his conscience, and neither the duress of the kings hirelings nor the pleading of family and friends could move him.

The heart of the drama is Mores interior ordeal, the conflict of his conscience with his affections. Even his contest with his adversaries is on the intellectual plane, with a minimum of physical action. Still, by a marvel of dramatic writing, the play is as exciting as if Sir Thomas engaged the king in a duel or fist fight.

As a stage production, the drama is magnificent. Noel Williams, probably following the authors stage directions, guides the action in the fluid style of the Chinese theatre, which enables a character identified in the playbill as The Common Man to double as property man. The acting rises from superior in supporting roles to Paul Scofields superb performance in the role of Sir Thomas.

To quote the program note again:

The action of this play ends in 1535, but the play was written in 1960, and if in production one date must obscure the other, it is 1960 which I would wish clearly to occupy the stage. The "Life" of a man like Thomas More proffers a number of caps which in this or any other century we may try on for size.

Coming out of a screening of this film adaptation of Robert Bolts splendid play about Sir Thomas More, an erudite, unbelieving colleague asked me if More was indeed recognized as an official saint. I replied that he had been canonized some thirty years ago under Pius XI, waiving the requirement of miracles because the Pope believed so strongly that laymen needed a model for their coming ordeals. My friends unhesitating observation was: "Perhaps that was the miracle."

Behind this seemingly flippant remark, it seems to me, lie both an enormous respect for Mores unshakable integrity and an instantaneous grasp and at least wry approval of a complicated chain of reasoning on the part of 20th-century Church authority. At the risk of seeming flippant myself, I think it is something of a miracle that we have a play—and now a movie—as good as A Mall For All Seasons about the laymans martyr-saint.

Two distinct though not unrelated questions have to be considered: first, the quality of the film and, second, its possible impact. I must admit that I approached the film with some trepidation. It is a widely accepted axiom that it is easier to make a good movie out of a bad play than out of a good one; a bad play can be altered with a clear conscience so that its mishandled virtues are brought to the fore in a different medium, whereas there is a natural reluctance to tamper with a work of dramatic stature, even though the qualities that made it effective on stage will work against it on the screen. Also I knew that the Common Man had been omitted from the film version. Besides serving as a unifying device in the play, this cheeky epitomizer of expediency was a constant reminder to us that we are not like More, the symbol of "adamantine selfhood," but like the self-serving compromisers around him. I wondered what alternative method could be found to keep this salutary and humbling judgment before us.

My fears were groundless. Playwright Bolt, acting as his own scenarist, and director Fred Zinnemann have done a superb job of turning the play into a movie. Cinematic pacing, rhythm and verisimilitude are achieved in part by "opening up" the film to just enough scenes of court pageantry and the sylvan loveliness of the Thames, which was the principal artery of communication between the court and its ministers. The main cinematic tool, however, is the camera, artfully capturing the faces of superb actors speaking superb dialogue—dialogue that is the outward manifestation of electrifying confrontations and inner conflicts. Ordinarily I am able to make the necessary distinction between what I bring to a film and what is actually present on the screen; in other words, to tell the difference between a movie that will appeal only to the already converted and one that can communicate with the largely uninstructed and uncommitted. I do not quite trust my objectivity concerning A Man for All Seasons. The film seemed to me, however, to possess much greater clarity and intellectual and emotional force than the play did, and I doubt that I could make this judgment except for what the film itself accomplishes.

A question put to Robert Bolt on a TV program the other day expresses the sense in which I would like to inquire into the films possible impact. The moderator asked: "What do you hope to achieve with this film?" To which Bolt gave the sensible, unpretentious and, it must be admitted, commercially shrewd reply: "I hope many people will be vastly entertained by it."

I agree that a film can accomplish nothing unless it first entertains. I would further suggest that, in practice, few films that entertain do, in fact, elevate, though this is an area about which we know shockingly little and are further handicapped by thinking we know a lot of things that "aint so." A Man For All Seasons is about the best we can hope for in the way of a great theme given consonantly great treatment (for which windfall, incidentally, we are indebted to an agnostic playwright and a Jewish director of great skill and integrity). It strikes me as a fertile and reassuring starting point for an inquiry into how the Christian is acted upon in todays mass communications world and what, if any, constructive course we can take to shift the balance of the mass medias impact in our favor.