Review: Finding our way back to the farm 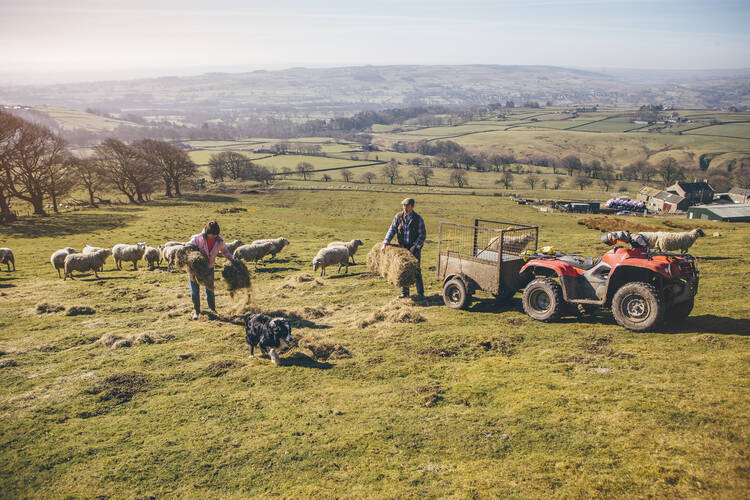 I have done my fair share of farming, at least for someone in his early 20s who lives in a city. The first time I worked in agriculture was the summer after my junior year of high school, when I worked five days a week at a community garden in Washington, Conn. Working for my boss, Denise, in the pale, humid glare of summer mornings, I learned the principles of organic farming: manually plucking green, thumb-sized hornworms from tomato plants; planting flowers like marigolds to enrich the soil instead of using chemical fertilizer; weeding by hand instead of machine-gunning plant beds with herbicides.

It is this type of farming, integrated with the natural world, that James Rebanks advocates in Pastoral Song: A Farmer’s Journey, a book that is half memoir of farm life, half manifesto against modern agricultural practices.

James Rebanks uses his intimate knowledge of both the land and the people who work it to take a stand against today’s mechanized and inhumane methods of cultivating plants and animals.

Rebanks, an Oxford University graduate from the north of England, is not officially an environmental scholar or the founder of some conservation nonprofit. Born of a long line of farmers, he uses his intimate knowledge of both the land and the people who work it to take a stand against today’s mechanized and inhumane methods of cultivating plants and animals. Rebanks’s background transforms a persuasive argument about the damage of modern farming techniques into a personal testimony pulsing with frustration and despair, but ultimately hope.

Like an ecological triptych, Pastoral Song showcases the past, present and future of agriculture’s relationship with the environment. In the first 100 pages, Rebanks reminisces in vignettes on his boyhood spent on his family’s farm in the fells of Northern England. He recounts how he was taught to perform the daily tasks of the farm by his grandfather, an old-fashioned farmer wary of technological disruptions to agriculture.

The second section of the book changes focus to three years after his grandfather’s death. Now Rebanks’s father has taken on the onus of managing the farm just as the economic austerity measures of the Thatcher years in Great Britain have reached their peak. Eschewing his own father’s phobia of technology, Rebanks’s father begins to use pesticides, fertilizers and a host of other modern techniques that promise small family farms some chance against the ascendant large industrial farms. But as the growing of crops becomes more efficient, Rebanks recalls, the soil grows poorer. Flooding in the nearby town intensifies and the wildlife that once populated the fields disappears. His father comes to regret the destruction this new style of farming has wrought, but the economics of farming leave him with little choice but to continue.

Finally, Rebanks writes closer to the present, after his father has passed away, leaving the farm to him. Rebanks too has come to appreciate his grandfather’s skepticism of profit-driven agriculture. Environmental advocates, sympathetic to the challenges of farming, provide him with suggestions to harmonize his farm with natural landscapes. Bit by bit, Rebanks begins to implement methods of farming that allow natural flora and fauna to live side by side with livestock and crops.

Like an ecological triptych, Pastoral Song showcases the past, present and future of agriculture’s relationship with the environment.

Ultimately, Rebanks offers a hope for the future, though it is qualified. We humans do have the power to stop the extinction of species, the polluting of waters and the destruction of the wilderness. But, he says, it is naïve as well as unproductive to envision a perfect balance in which nature and humanity are both able to thrive at full capacity. “The logic chain is simple: we have to farm to eat, and we have to kill (or displace life, which amounts to the same thing) to farm,” Rebanks writes. Going into the future, nature will be compromised as long as we feed ourselves by means of agriculture. The key is to minimize harm.

The book pushes against the tendency in environmentalist circles to jump to utopian ideals of farming without considering the practical realities of the labor needed to get there. Rebanks bristles at the idea that the farmer’s life is any sort of retreat from the responsibilities of work. Instead, “I’ve come to see that the reality of being a farmer is anything but an escape from the world; it is often like being a slave to it,” he writes. When Adam and Eve were expelled from Eden, God was up front with them that producing food would be sweaty and back-breaking work. Rebanks knows this experience well.

He reminds us that human farmers remain central to the agricultural process, even as impersonal supermarket shelves insulate consumers in wealthy countries from this reality. The rise of corporate farming has resulted in plummeting prices for agricultural products, so family-run farms are rarely able to stay afloat. In what could pass as a brusque paraphrase of Pope Francis’ “Fratelli Tutti,” Rebanks writes: “None of us can escape commercial realities, but we can try to reshape our society to make it fairer, more decent, and kinder. I am sick of 1980s economics bulls—t.”

Nevertheless, it is clear that Rebanks also appreciates the beauty inherent in his family’s otherwise thankless trade. As he writes about his farm, his words often skip like stones on the boundary between prose and poetry: “The old farmhouse glass” has “whorls, like knots in an oak-tree trunk”; and he recalls how his arms, after picking berries from a thorny bush as a boy, were “scratched chalky with the barbs.” His great skill for metaphor demonstrates a deep love for the tiniest details of his farm, as if they are glimpses of the divine countenance.

Pastoral Song comes amid a renewed interest in returning to humanity’s agrarian roots. Many thousands of people have developed an interest in TikTok accounts run by farmers, chronicling the personalities of various animals alongside quotidian barn chores. This trend reveals a longing that many people carry in the recesses of their souls for something better than the current urban-centered way of living, working and being. Unfortunately, few ultimately act on these transcendent urges because their imaginations have been calloused by society’s insistence that there is no alternative to a corporate, capitalist economy.

As Rebanks sees the situation, this hunger to return to the land is part of a story spanning generations, something from which we cannot extricate ourselves no matter how hard we try. In the industrialized West, “we act as if we popped into town to earn a living a generation or two ago, but will be going home soon to a place in the country,” he writes.

For the most part, Pastoral Song does not offer a concrete game plan for finding our way back to the farm. Instead, the great value of Rebanks’s book is the framework it provides for readers to examine how they want to live their lives in relation to the earth, our common home.

This article also appeared in print, under the headline “Finding Our Way Back to the Farm,” in the April 2022, issue.