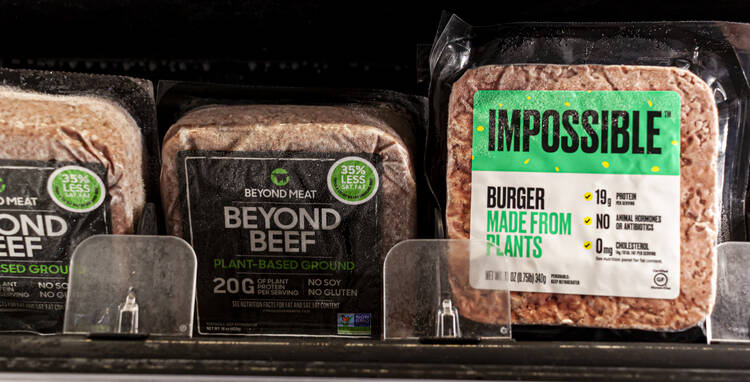 Factory-produced fake meat is not necessarily the solution to factory farming. (iStock/Grandbrothers)

My family farmsteads on five acres in northwest Louisiana (at least we try to), and we buy any meat we do not produce ourselves from local, small producers within a 90-minute radius. John W. Miller’s critique of factory farming (see “Is it time for Catholics to stop eating meat?”) resonated strongly with me because our family’s food choices reflect a moral framework rooted in a desire for environmental and social justice. Vegetarianism (or veganism) is one way to express this desire for justice, and I respect the noble intentions of those who choose this option. But I have reached a different conclusion, especially when vegetarianism means embracing “fake meat.”

Simply put, the billion-dollar fake meat industry is built upon an unjust commodity-driven grain market in which prices are determined by speculation by investors, similar to what drives the stock market. In addition, the industry is dependent on a planet-destroying, diesel-fuel-based transport system. Fake meat is not a true alternative to animals raised in confinement but rather part of the very system it purports to replace. The production of fake meat requires a specific range of crops and materials, including soy, pea protein and beets. These crops, often referred to as “inputs,” are often grown in a monoculture system that over time depletes the soil of nutrients. Ironically, many of these same crops are also used for feeding the animals raised in the confinement systems preferred by industrial agriculture.

Fake meat is not a true alternative to animals raised in confinement but rather part of the very system it purports to replace.

Vegetarianism, if it depends on supporting the fake meat industry, simply cannot be presented as a superior ethical or moral stance. We do not need another excuse for the maintenance of the status quo: a food world governed by large corporations that engage in the worst excesses of our current economic system, such as monopolies, price fixing and the reduction of human beings to assets and debits on a ledger.

As Catholics who have been claimed by truth and dedicated to justice, we must insist upon a better way, a way that respects the human person and is focused on justice. That way is already among us in farms throughout the world dedicated to regenerative agriculture.

Many of these farms are built around the family unit, which was held up by Pope St. John XXIII in 1961 in the encyclical “Mater et Magistra” as “the ideal kind of farm.” They are dedicated to raising animals in a way that respects their animal-ness, using pasture-based systems that allow the traits of each animal to flourish. In contrast to factory-farmed animals, pigs raised from birth on these smaller farms spend their lives rooting, exploring and mud-bathing. A pig is simply allowed to be a pig. And these small farms hold as their greatest treasure the soil itself, for they recognize that the greatest legacy we can bequeath to our children is regenerating the earth through sustainable farming practices that tie together the inputs of humans and animals.

These smaller, regenerative farms are also deeply rooted in their local communities—something that cannot be said of either factory farming or factory-produced fake meat. In the face of the erosion of rural life through population decline, a lack of economic opportunity and even spiritual malaise (a decline that is intimately tied to the erosion of the soil itself), these small farms stand as a beacon of hope. They offer not only physical nourishment but also spiritual nourishment in the form of a community that is centered around the higher purposes of sustainability, resilience and integrity.

If these farms were to flourish and multiply, they could not only defeat the current status quo of industrial agriculture but could bring to reality the vision of John XXIII, who went on in “Mater et Magistra” to comment:

In the work on the farm the human personality finds every incentive for self-expression, self-development and spiritual growth. It is a work, therefore, which should be thought of as a vocation, a God-given mission, an answer to God’s call to actuate His providential, saving plan in history. It should be thought of, finally, as a noble task, undertaken with a view to raising oneself and others to a higher degree of civilization.

Choosing vegetarianism or veganism is certainly not in opposition to this noble task, and one can indeed make this choice in tandem with the intention to support local producers. But if such a choice involves the embrace of the fake meat industry with its attendant problems, one must ask whether it is indeed a choice rooted in a desire for all of God’s creation to thrive together in a community of justice. The regenerative farming movement, centered around local economies, certainly meets this standard.

[Related: Cities get our attention, but rural America has many of the same challenges] 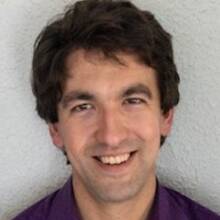 Robert Cruz is a freelance musician, trained in sacred music, in the Shreveport, La., area. He and his wife recently established Opt-in Farm, a five-acre farmstead where they live with their three children and a regularly changing cast of chickens and pigs.