The message of this year’s Oscar picks: It’s up to our kids to save the planet. 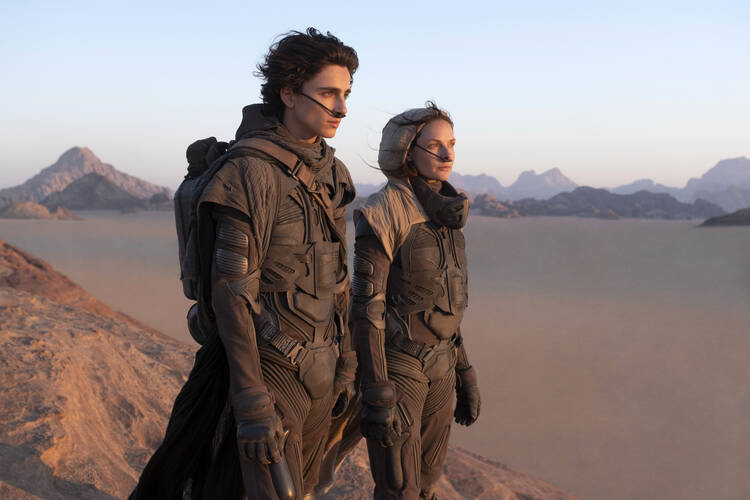 The 2022 Oscar nominees were announced this week. It is the first year in a long time where biopics did not dominate the nominations. Of this year’s 10 best film nominees, only two—“Belfast” and “King Richard”—are based on true stories.

It also may be the first time that the future best actor winner has done St. Ignatius’ Spiritual Exercises. Andrew Garfield, who had a banner year with award-worthy performances in “The Eyes of Tammy Faye,” “Spider-Man: No Way Home” and “Tick…Tick... Boom!” (for which he was nominated), spent six months with our own James Martin, S.J., doing the Spiritual Exercises as part of his preparation for playing a Jesuit priest in Martin Scorsese’s 2016 film “Silence.” While all the nominees for best actor are worthy and wonderful, suffice it to say that the America staff is here for the Garfissance.

[Andrew Garfield played a Jesuit in Silence, but he didn't expect to fall in love with Jesus.]

But the thing that stands out this year is how many of the nominated movies tell stories of young people struggling to find their place in the world. Of the 10 films nominated for best picture, seven have young people as their protagonists, and an eighth, “King Richard,” is about the father of tennis stars Serena and Venus Williams as they work to become tennis pros. All five best animated film nominees likewise are stories of young people. And Oscar-nominated “Tick…Tick…Boom!” and “Spencer,” while focused on characters in their late 20s/early 30s, have similar themes.

Of course, stories of young people grappling with life are evergreen. Paul Thomas Anderson’s wonderful 1980’s throwback “Licorice Pizza” is a John Hughesian tale of young people groping toward adulthood, and Lin-Manuel Miranda’s “Tick…Tick…Boom!” a classic musical of the “How do I make my dreams come true?” variety. Animated nominees “Encanto” and “The Mitchells vs. the Machines” and best picture nominee “CODA” all offer versions of the age-old tale of young people trying to establish a life for themselves amid the expectations of their families, as does the Princess Diana biopic “Spencer.” Steven Spielberg’s “West Side Story” remake and Kenneth Branaugh’s Irish memoir “Belfast” likewise tell familiar stories of young people trapped by social forces far beyond their ability to oppose or even understand.

The thing that stands out this year is how many of the nominated movies tell stories of young people struggling to find their place in the world.

But what makes this year’s crop of nominees unique is the persistence of their emphasis on the young people’s role as savior. In the case of “CODA,” this is the main character’s dilemma: As the only hearing member of a deaf family of fishers, Ruby has spent her entire life having to communicate on their behalf. Nearing the end of high school, she struggles to believe it is O.K. for her to pursue a life of her own.

But in most of the other films nominated, saving the world is just young people’s proper place in the scheme of things: Prince Paul Atreides from “Dune” was destined to be the savior of the universe. Bookish teenager Peter in “The Power of the Dog” is the only person that sees the harm being caused to his mother by his stepfather’s cruel brother, and therefore the only one who can act. Jennifer Lawrence’s nerdy grad student Kate Dibiasky in “Don’t Look Up” is likewise the only one able to stay true to the cause of trying to save Earth from an approaching comet; her dissertation director is seduced away by the allure of the media (and Cate Blanchett). Tony and Maria in “West Side Story” are the only ones who have any chance of preventing the coming violence in their communities.

A few of the nominated films do nod to the cost of being put in this position. Kate Dibiasky is arrested, demeaned and socially shamed. “Spencer” sees Diana, who once upon a time had been imagined as the savior of the Royal family, made to seem crazy by Charles. Tony and Maria lose everything.

But most of these films end up reaffirming the rightness of their role. “Encanto” is a case in point: Even as the film spotlights the debilitating effects of asking young people to be responsible for protecting or saving their families, in the end the salvation of both the Madrigal clan and an entire community of Colombian refugees falls onto the shoulders of youngest daughter Mirabel. Being the hero might be hard or unfair, but it is still her vocation. Peter in “Dog” likewise turns out to be disturbingly good at taking his step-uncle down. Tony and Maria’s sacrifices end the war in their community.

At a time when our world contends with so many difficult issues, to see Hollywood imagining young people as our saviors raises many questions. Are we who are older trying to encourage those who are younger to be better than us? Or are we sloughing off any sense of personal responsibility for the world onto them? Could there be anything more profoundly self-indulgent than refusing to make the sacrifices necessary for future generations to thrive, then casting those same future generations in the role of our saviors?

This isn’t just a matter of hard-to-get-your-head-around-issues like climate change, either. The scorched earth politics of Washington and many state houses today are crippling our communities’ capacity to function and deliver appropriate services and also razing their spirits. If we’re not careful there is not going to be any meaningful society left for our children to live in, let alone save.

Maybe our kids can help fix some of the problems in our world. But they are not superheroes, and the rest of us are not bystanders. O.K., boomers?

Some politicians love to screech that Hollywood is not America. And yet “Encanto” has been one of the biggest animated films of the entire pandemic; its song “We Don’t Talk about Bruno” just went to number one on the Billboard’s global charts. “Don’t Look Up” broke Netflix streaming records; “Power of the Dog” did well, too. “Dune” has earned $400 million worldwide, in addition to opening strong on HBOMax.

Truly, the stories we choose to watch and celebrate say something about our beliefs and desires. And the Oscar nominations hold up a challenging mirror not just to the media industry but to ourselves. Maybe our kids can help fix some of the problems in our world. But they are not superheroes, and the rest of us are not bystanders. O.K., boomers?

More from America on this year’s Oscar nominees:

Correction: In a previous version of this article, Kate Dibiasky's last name was misspelled.