‘Dune’ is another sci-fi Messiah tale. The New Testament references are everywhere. 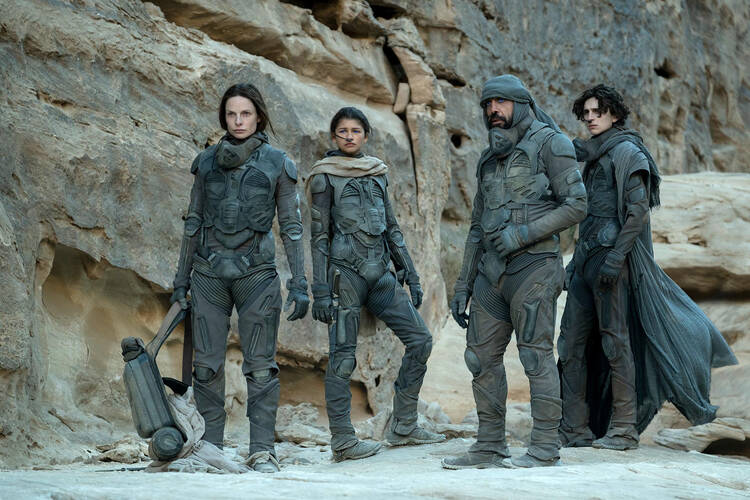 Certain fans of Frank Herbert’s classic sci-fi novel Dune will be all about the sandworms. “How,” they will be asking, “will director Denis Villeneuve be portraying the 1,300-foot slugs that burrow like hungry subways beneath the parched surface of the planet Arrakis?” Others will be eager for Villenueve’s take on Herbert’s colonialist metaphor, about feudal clans exploiting a resource-rich, underdeveloped planet that every military power in the galaxy wants to control.

Others still will wonder, and not for long, how this new film version of the 1965 book approaches the Messiah story underlying Herbert’s futuristic fantasy, something the director and his co-writers (Jon Spaihts and Eric Roth) place front and center and use to adorn a movie that badly needs the juice.

Frank Herbert’s beloved novel has enough material that should preclude the kind of dead space that inhabits so much of this “Dune.”

Is Paul Atreides “The One”? Portrayed by Timothée Chalamet, Paul is the hero of this epic, heir to the House of Atreides, a young man uncertain of his destiny who foresees his own death—and whose behavior and innate knowledge conform to the prophecies of the Fremen, the oppressed desert people of Arrakis. Conceived by an unmarried mother, Jessica (Rebecca Ferguson), Paul has dreams that are haunted by a Fremen girl, Chani (Zendaya), and his vision that “Someone will hand me a blade”—as he intones with a premonition of betrayal that suggests being denied three times before the cock crows. The weapon he imagines is a “kris” knife, which etymologically does not derive from “Christ” but is mentioned often enough to make one wonder.

Paul’s awakening to his destiny is the most interesting thing about “Dune,” and Villeneuve knows it. Jessica had been ordered to have a girl child (she has the ability to select the gender), but in defiance of the Bene Gesserit—the all-female religious order and shadow political force to which she belongs—she gave birth to Paul and raised him in The Way, whose adherents possess uncanny powers both mental and physical. Jessica, who on occasion wears Buddhist-inspired robes the color of saffron—the same color as “Spice,” the life-extending, mind-enhancing drug mined by “outlanders” on the Fremen’s planet—has prepared Paul as best she can. But his Calvary will be Arrakis.

Paul’s awakening to his destiny is the most interesting thing about “Dune.”

With all this on his mind, and on ours, the battle for the planet gets underway, as does a movie that clocks in at about 158 minutes, only half of which are bearable. Herbert’s beloved novel, which was adapted by David Lynch in 1984 and turned into a Sci-Fi Channel miniseries in 2000 (a planned 14-hour version by the Chilean-French filmmaker Alejandro Jodorowsky went unmade), has enough material that should preclude the kind of dead space that inhabits so much of this “Dune.” But with plans to continue the story into a second movie, Villeneuve (“Arrival,” “Blade Runner 2049”) starts spinning his wheels in the sand about halfway to a sandwormy destination.

It is terribly disappointing. Villeneuve’s effort contains all the needed mythology, astonishing production design (by Patrice Vermette) and superb cinematography (by Greig Fraser) to be utterly captivating, and it is for a considerable amount of time. There is also an over-large helping of musical bombast from Hans Zimmer, though it can be welcome during moments of narrative inertia. And there are a couple of terrific performances, most memorably by the astonishing Ms. Ferguson but also by Chalamet, Stellan Skarsgård as the monstrous Baron Vladimir Harkonnen and Jason Momoa, who has the sort-of Han Solo role as swordsman Duncan Idaho.

Javier Bardem is both dreadful and comic as Stilgar, a Fremen tribal leader. But both Josh Brolin as weapons master Gurney Halleck and Oscar Isaac as Paul’s father, Duke Leto Atreides, seem anemic, and the reason may be the reviewer’s bias: I would object as much as anyone to English actors playing these “American” roles, but neither Isaac nor Brolin has the vocal gravitas to pull off the kind of high-minded hokum that the screenwriters have provided them. As a result, they fall flat.

Isaac does, however, strike a memorable pose, direct from “The Pietà,” after being left naked and betrayed at the figurative feet of the obese-yet-levitating Baron. The New Testament references are everywhere in “Dune,” but never mind that it largely takes place in a desert. It only feels like 40 days.