Netflix’s ‘Tick, Tick...Boom!’ is a miraculous resurrection of an artist we lost too soon 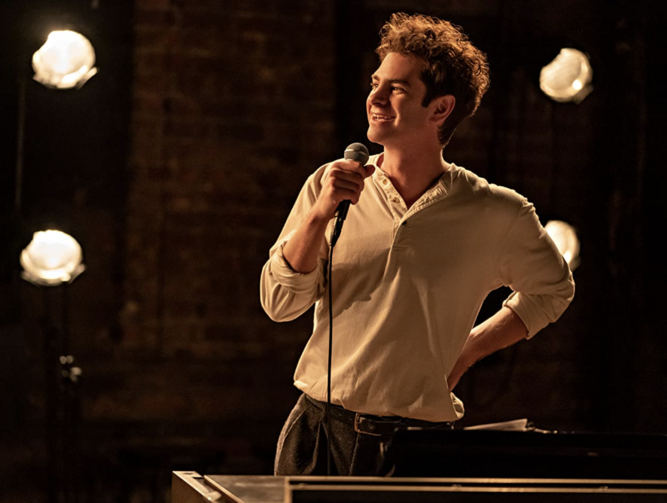 “Tick, Tick … Boom!,” the stunning, irrepressible new film based on a musical by “Rent” composer Jonathan Larson (now showing in limited theaters and on Netflix), is a mix of all three categories. It is also a distinguished entry in a more rarefied catalogue: Like Fellini’s “8 ½” or Bob Fosse’s “All That Jazz,” “Tick, Tick … Boom!” is a brilliant exercise in self-reflexive autofiction, a portrait of the artist that seems to draw itself.

“Tick, Tick … Boom!” is a soul-deep tribute by Lin-Manuel Miranda to an artist who inspired him at a formative age.

This is all the more impressive a feat because it’s an act of channeling by the filmmakers, director Lin-Manuel Miranda and screenwriter Steven Levenson, and actor Andrew Garfield, who plays Larson. The composer famously died in 1996, at the age of 35, on the eve of the Off-Broadway premiere of “Rent.” So “Tick, Tick … Boom!” isn’t just an adaptation of an early, autobiographical work by Larson; it is also a soul-deep tribute by the composer of “In the Heights” and “Hamilton” to an artist who inspired him at a formative age.

Lest this make “Tick, Tick … Boom!” sound somber or reverential, not to worry: It is instead a brisk, assured, bustling entertainment that manages to achieve the soaring transcendence that musicals can deliver without abandoning the intimate, even grubby realism of a chamber drama. Framed by a performance of the songs at an Off-Broadway theater that Larson did with a band in the early ’90s, the film’s story unfolds mainly in the cluttered walk-up apartment Jonathan shares with Michael (Robin de Jesús), a childhood friend who is abandoning the theater to work in advertising—and decamping to enviably posh digs uptown—and in the greasy-spoon diner where Jonathan works to barely make ends meet.

Lest this make “Tick, Tick … Boom!” sound somber or reverential, not to worry: It is instead a brisk, assured, bustling entertainment.

Jonathan’s driving passion is to complete a futuristic musical called “Superbia” in time for a public workshop, which he imagines will be his ticket to immediate success and the end of his troubles at the ripe age of almost 30. But this leaves him no time either for Michael, who despite his financial success is having his own problems, or for his girlfriend, Susan (Alexandra Shipp), a dancer who wants to move out of the city.

Typical relationship stuff, you might think, and you would be right. But the sharp edges of these archetypal conflicts among young people finding their way in the world—and the dawning of hard-won realizations about the true value of how we spend our time and who with—are brilliantly and originally musicalized. One signature episode finds Jonathan and Susan in the midst of a messy fight as his deadline looms, intercut with a breezy, funny hoedown of a song called “Therapy,” performed perkily by Garfield and Vanessa Hudgens from the stage. (A special shout-out here to the film’s editors, Myron Kerstein and Andrew Weisblum, for this tour de force, as well as for the film’s percolating, sympathetic rhythms throughout.)

Music isn’t just Jonathan’s profession; it emerges organically from his world. In one memorable sequence, he seemingly improvises a song, “Boho Days,” over a beat he taps out on a friend’s back. Later, during a dark night of the soul, he stumbles across a piano on the Delacorte stage in Central Park and sings what is in many ways the film’s emotional climax, the searching “Why.”

And in one bravura sequence that will have theater fans agog, a chaotic Sunday brunch at the diner blossoms improbably and beautifully into a chorale of Broadway luminaries—the likes of André De Shields, Chita Rivera and Joel Grey, as well as stars from “Hamilton” and “Fun Home”—singing an inspired variation on “Sunday” from Stephen Sondheim’s “Sunday in the Park With George.”

That Sondheim musical about a painter consumed with his art at the expense of his personal life is an obvious touchstone for “Tick, Tick … Boom!” So is Sondheim’s “Company,” in which the 30th birthday of the unmarried lead character is the pretext for an angsty interrogation of social norms. In fact, so is Sondheim himself: Played with wit and sensitivity by Bradley Whitford, this shambolic eminence grise makes some crucial, encouraging appearances in the film, as he did in Larson’s life and career.

In the lead role, Garfield gives an impish, soulful, utterly winning performance. Crucially for a musical, he does some of his best acting while singing. De Jesús makes a bittersweet foil as his friend Michael, while Shipp does a subtle, knowing variation on the taken-for-granted girlfriend role, and makes the most of the clarifying ballad “Come to Your Senses.” As does director Miranda: He frames the song on a sunset-dappled rooftop with a view of the East River.

That Larson’s career was cut short by his sudden death (of an aortic aneurysm) is a source of endless, tantalizing what-might-have-been speculation. Though I have never been a fan of “Rent,” there is no denying its huge influence, or its composer’s talent and ambition. With his untimely passing, the musical theater clearly lost a major talent who hadn’t even reached his peak. What the new film of “Tick, Tick … Boom!” manages, then, is a kind of miracle resurrection: It fashions a fresh, vivid work out of the life and art of a writer who was just finding his voice when it was cruelly silenced. Jonathan Larson lives to sing another day.