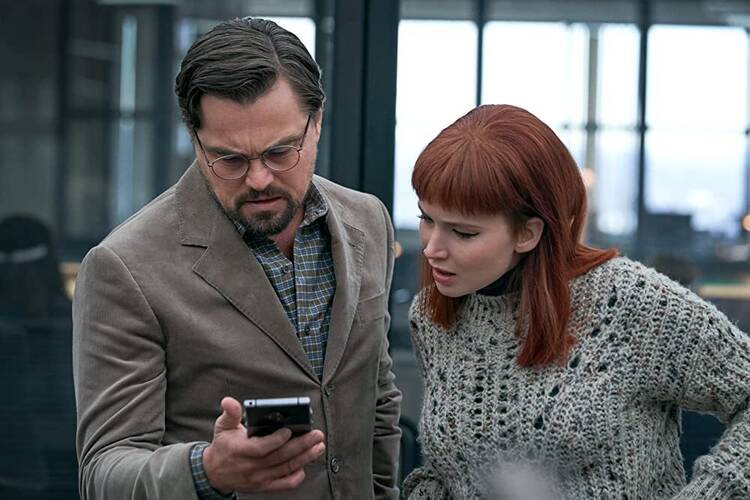 Leonardo DiCaprio and Jennifer Lawrence in "Don't Look Up" (IMDB)

For as much ink has been spilled in recent years about our accelerating climate crisis, Hollywood has yet to offer many compelling climate change narratives. One exception has been in the world of documentaries. Davis Guggenheim and Al Gore’s 2006 documentary “An Inconvenient Truth” brought the world climate crisis much more deeply into people’s awareness. David Attenborough’s “Planet Earth” and “Our Planet” nature series have likewise drawn big audiences with their exploration of the impacts of climate change on the flora and fauna with which we coexist.

I can certainly appreciate Adam McKay’s frustration with the world today. But the severity of "Don't Look Up" inspires only despair.

On the narrative side, while there have been a few efforts of late, most especially Paul Schrader’s film “First Reformed,” in which a pastor and others wrestle with the possible disasters ahead, probably the most successful attempt to marry story and the climate crisis has been Roland Emmerich’s 2004 disaster film “The Day After Tomorrow,” in which Dennis Quaid, Jake Gyllenhaal, Sela Ward and others try to survive continent-size polar vortexes that flash-freeze much of the northern hemisphere. Almost 20 years later I still think about the film’s end image of Americans, now the refugees, seeking help from Mexico.

I hadn’t yet heard anything about Adam McKay’s new climate-change satire “Don’t Look Up” when it popped up on the Netflix homepage on Christmas Day. But its pedigree is superb: a cast that includes Jennifer Lawrence, Leonardo DiCaprio, Meryl Streep, Cate Blanchett, Tyler Perry, Timothée Chalamet, Ariana Grande and Jonah Hill, among others; and writing and direction from McKay, whose most recent films “The Big Short” and “Vice” brought together farce and cutting socio-political insight in often-brilliant ways. As soon as it dropped, “Don’t Look Up” also began appearing on many culture critics’ Best of 2021 lists.

The opening of “Don’t Look Up” lures you in with the funny premise of Lawrence as a stoner astrophysicist grad student and DiCaprio as her highly anxious, aw-shucks dissertation advisor who together desperately try to convince the president (Streep) and the American media (Perry and Blanchett) to take seriously the extinction-level threat posed by an oncoming comet. Unfortunately, the film then settles into an angry and rather familiar screed about human stupidity. The president is only interested in the midterm elections. The MSNBC-style morning news chat team—think a more soulless “Morning Joe”— banters about DiCaprio’s hotness. The spooky messianic tech guru—of course there’s a spooky messianic tech guru—ends up responsible for the destruction of humanity more or less because he thinks scholarly peer reviews are an affront to his genius.

Yes, it’s one old trope after another, wheeled out wheezy and tired with no real hook to keep you watching beyond the question of whether or not humanity will pull off its own salvation despite itself.

You can feel McKay trying to make this his “Dr. Strangelove," but his own outrage completely overwhelms his gifts as a storyteller.

At times you can feel McKay trying to make this his “Dr. Strangelove” (and also “Network”). But his own outrage completely overwhelms his gifts as a storyteller. In the film’s third act, the arguments about how to deal with the comet descend into a battle between those who insist there is no comet (hence the title “Don’t Look Up”), and those who insist the comet is real. But despite this moment’s obvious resonance with our own bizarre and ongoing contest of belief over very straightforward things like vaccinations, masks and viruses, McKay doesn’t seem to appreciate that the energy given to such debate is itself another part of the problem, a time waster that allows people to feel like they’re doing something meaningful when in fact they’re accomplishing nothing relative to the crisis itself.

It is disappointing that McKay can’t see the forest for the trees here, but also not a surprise; more than anything, “Don’t Look Up” really is just another shouting voice, mistaking its high volume for a service.

What climate change stories need to succeed is not so much passion or a big message, but an emphasis on relationship. Attenborough’s genius as an environmentalist is his capacity to bring us into such an intimate space with the animal and plant life of our planet that we begin to see them as lifeforms with whom we are in a personal relationship. Likewise, we are invested in the story of Dennis Quaid’s paleontologist and his wife and son in “Tomorrow” precisely because they are each trying to help others and find one another. Their relationships make them relatable and show us a version of ourselves that we hope, in similar situations, we would be.

So much of Pope Francis’ papacy has been about trying to create similar kinds of epiphanies in us. In many cases that has had nothing to do with climate change: In publicly welcoming refugees, embracing a physically impaired child or having phone calls with transgender people, he invites us to see them as people who are worthy of our respect and care. But his climate change encyclical “Laudato Si’” similarly weds his message about the need for a conversion of our hearts to Attenborough-like moments in which he invites us to place ourselves into relationship with the natural world.

“The entire material universe speaks of God’s love, his boundless affection for us,” Francis writes. “Soil, water, mountains: everything is, as it were, a caress of God.” (No. 84) As we appreciate the wonders of the world as a part of our lives, places in which Francis reminds us that we “recover something of our true selves,” (No. 84) we become more willing to sacrifice on their behalf.

In the end, what undermines “Don’t Look Up” is exactly what it condemns: a lack of humanity. I can certainly appreciate McKay’s frustration with the world today, and our own frighteningly absurd behavior in it. But the film’s severity inspires only despair. Come-to-Jesus moments are of enormous value, but only if they promise that you actually do get to come to Jesus. If there is ever going to be any meaningful conversion of our hearts around climate change, it will no doubt involve a confrontation with our sinfulness, but also an invitation to greater love.