'Silence' is a complex film about the nature of faith—it's a wonder it ever got made. 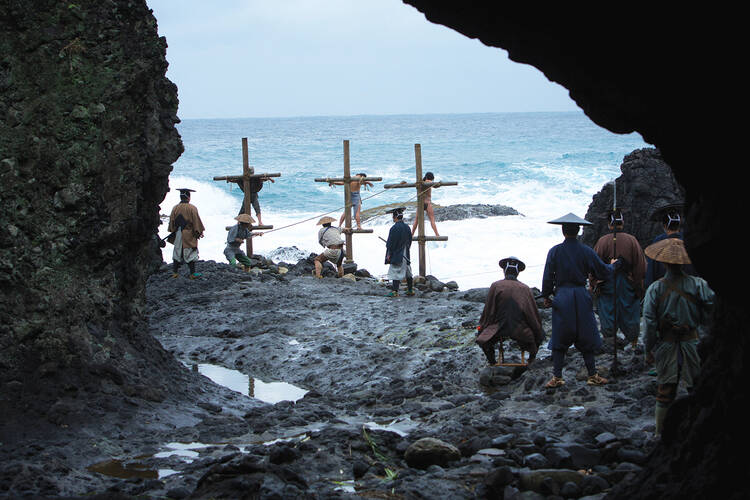 Heading out onto a chilly, rainy Times Square after a press screening of “Silence”—and trying to hold on to the spell it had cast—I was accosted by a fellow critic for whom the entire experience had been a washout.

“Why were they there?” he asked, more or less rhetorically. “We’re supposed to sympathize, but they shouldn’t have been there in the first place.”

The movie’s “they” and “there” are 1) Portuguese Jesuits and 2) 17th-century Japan, the setting for what is, despite my associate’s doubts, a masterpiece—though that is certainly an overused word and Martin Scorsese hardly needs, at this point, to prove his mastery. Fans will agree that no one else could have made this movie (so will non-fans, probably, even the anti-colonialist cited above). But saying so is not meant solely as an affirmation of Scorsese’s directorial gifts.

“Silence,” which will be elusive to the many and beloved by the few, is among the most challenging movies, intellectually and spiritually, that a major studio has ever released. It is subtle; it makes zero concessions to the concerns of commerce and marketing; it will not endear itself to the less-than-devoted cinephile in the way that, say, “GoodFellas” or even “Taxi Driver” has over the years. A project as personal and passion-driven as this one—the director has been planning it for over 20 years—could only have been made by someone of Scorsese’s stature. No one else could have gotten away with it.

“Silence,” for all its glorious imagery and unsparing narrative, is unlike anything else being made today, and if it resembles anything in the Scorsese oeuvre, it is “Kundun,” his drama about the Dalai Lama. That film, too, wore its spiritual aspirations on its sleeve. It displayed—not just in the storytelling, but in the filmmaking itself—a yearning for spiritual truth. But “Silence” is not a movie about the legitimacy of missionaries—my friend apparently was unaware of Jesus’ exhortation to “go into the world and preach the Gospel to every creature” and the sidewalk didn’t seem like the place to explain it (although, on reflection, maybe it was). The film is also not about the weakness of the flesh versus the strength of the spirit. It is not about the sadomasochistic inclinations of the Japanese, though some viewers will certainly see it that way. It is, in a perhaps simplified sense, about the bona fides of faith.

The silence of the title is divine. “The weight of Your silence is terrible,” prays Father Rodrigues (Andrew Garfield), sometime late in his Japanese ordeal, long after he and Father Garupe (a close-to-emaciated Adam Driver) have traveled from Portugal in search of the notorious apostate Father Ferreira (Liam Neeson), who has been absorbed into Japan without much of a trace. Under torture, it is said, Ferreira renounced Christ and his teachings.

“That’s not possible,” Garupe tells their superior, Father Valignano (Ciarán Hinds), with the conviction of a man who has never been tortured. It has been years since Ferreira disappeared, but it is also the 1640s, and Valignano has just gotten the news. He thinks it wise to delay his young priests’ travels east.

But Garupe and Rodrigues are adamant: It is even more imperative now, they insist, that they travel to Japan, learn the truth and continue the mission begun by Ferreira and other Jesuits, many of whom have died in the line of duty. It is inconceivable to Rodrigues and Garupe that the faith of a giant like Ferreira could be compromised by something as mundane as physical pain—or, as they’ll find out, being hung upside down for days over a pit of excrement while being slowly bled to death.

Based on the novel by Shusaku Endo (it was adapted once before, by director Masahiro Shinoda in 1971), “Silence” enters a Japan that might have sprung from the brow, and eye, of Akira Kurosawa (for whom Scorsese portrayed Vincent van Gogh in the 1990 “Akira Kurosawa’s Dreams”). Mist-shrouded and primal, it will be referred to several times as a “swamp”—a place where Christianity cannot possibly get a foothold—and that is how Scorsese visualizes it at first, as an impenetrable murk. That the murk will clear as our two Jesuits grow in awareness indicates that it’s not necessarily Japan that is befogged.

Few movies have focused on the concept of Christ-as-revolutionary in such an intriguing way. Official Japan, after all, is right to oppress the missionaries and their followers, if what they want is to maintain order and fealty to the status quo. (The action in “Silence” begins just a few years after the revolt of Japanese Catholics against the reigning shogunate, an episode known as the Shimabara Rebellion.) Scorsese does not articulate the conflict as such, but the Japanese officials responsible for the persecution are reasonable people, especially the creepy old samurai named Inoue (screen veteran Issei Ogata), who serves as a kind of one-man Inquisition. (There are no references to the Spanish Inquisition, though the similarities are there.) The Japanese are not evil. They are in fact wise, in their way: Christianity will undo their country as they know it. It must be stopped.

It is an important point, about both the film and its director. Scorsese has often been numbered among this country’s prominent Catholic filmmakers, and this has much to do with his upbringing—in Little Italy, in the shadow of the old St. Patrick’s Cathedral, where he found solace as an asthmatic child and became fascinated by the rituals and mysteries of the church. But the designation also has to do with the desire one senses in his films for addressing evil by confronting it, for defeating one’s fears by embracing what one fears.

For all the violence of “Silence”—which includes decapitations, and crucifixions in the surf—it is not evil that is being practiced by the Japanese hierarchy. It is realpolitik. Where Satan lurks—Rodrigues begins to think so anyway, we sense—is in the eyes of Ferreira when they finally meet. (This is not a spoiler; Neeson, who gives a magnificent performance, is in the poster for the film.) The Japanese approach to getting the priests to renounce their creed in both word and deed—have them place their foot on an image of Jesus, or spit on a crucifix—is to torture their followers. The sparing of others by degrading oneself becomes the issue. Is it really apostasy if you’re saving another’s life? In a kind of twisted version of the theological debate over faith and works, the film asks if abominable actions are sinful if they are done with the best intentions, and the faith remains inviolate in one’s heart.

To that end the most interesting and important character in the movie is Kichijiro (Yôsuke Kubozuka), a fisherman who apostatized while the rest of his family was burned to death. On one hand, he seems faithless—while others endure unspeakable agony, Kichijiro rolls over, so to speak, renouncing his faith numerous times. And yet, after each time he returns to the fold, and begs Rodrigues to hear his confession. He may not be the “hero” of the piece, he may have no “pride”—which is Rodrigues’ problem, is it not?—but in many ways Kichijiro is the exemplar of undying faith. He is the perpetual penitent, the one who really believes in divine forgiveness, unqualified godly love and God’s open offer of redemption. While Rodrigues perseveres with his idealized concept of faith, Kichijiro suffers for his sins and seeks forgiveness—not once, but many times.

Kichijiro is us, of course, but he is also Rodrigues. And Ferreira. And every character who mistakes his ego for belief. “He’s arrogant like the others,” a Japanese says of Rodrigues, “which means he’ll fall.” As the Japanese and Martin Scorsese know, it’s just a matter of time.

John Anderson is a film critic for The Wall Street Journal and a regular contributor to the Arts & Leisure section of The New York Times.

Show Comments (
2
)
Comments are automatically closed two weeks after an article's initial publication. See our comments policy for more.
Kevin Murphy
6 years 1 month ago
You couldn't drag me to another violent, self-indulgent "masterpiece" by Scorcese, one of the most overrated directors of our time. His movies are pretty, technical, and devoid of true sentiment. I've never watched one of his films and came away feeling I'd had a true, aesthetic experience.
Nancy Walton-House
6 years ago

I saw the film with three others. We all thought it was beautiful, deeply spiritual, challenging, inspirational and memorable. The story is relevant today as it deals with faith, doubt and resolution. I am very glad I saw it and will see it again after significant reflection.