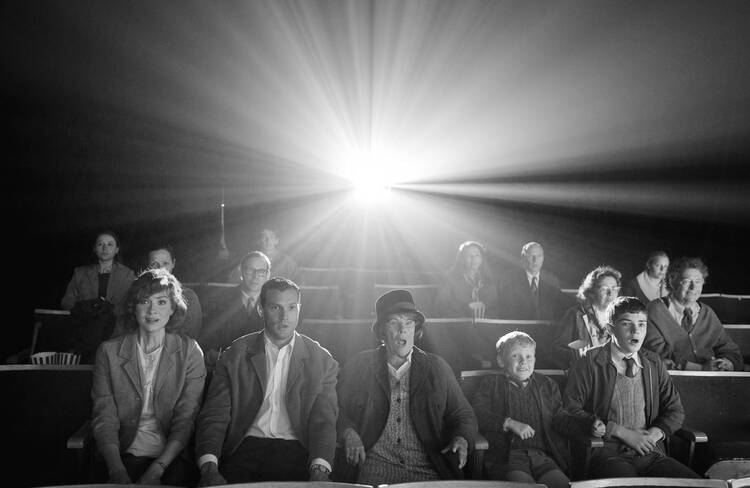 “Belfast,” a memoir of Kenneth Branagh’s early Protestant childhood in the Troubles-torn Northern Irish city, gives us a child’s-eye view of Catholicism. “Paddy Cavanaugh told me as long as Catholics keep confessing everything bad they’ve done to a priest, then they can do whatever they want and God will forgive them all the time,” says Buddy, the stand-in for Branagh, who wrote and directed the film. Buddy’s mother confronts his dubious theology with her own. “They get a lot of water thrown on them and then they’re O.K.,” says Mom (Caitríona Balfe). “I think that’s it.”

This is funny, sure, but the deeper point is that the violence that tore Belfast apart for so many years hinged on differences, and history, about which many of its victims had no clue, if in fact there was a clue to be had. Such knowledge certainly eludes the 9-year-old boy at the center of the film, who watches, circa 1969, as one set of his neighbors smashes another’s windows, loots their grocery store and threatens his own father (Jamie Dornan) with violence for not choosing sides in a conflict that—for him and his family—makes no sense.

“Belfast” presents itself as a family photo album: Violence may intrude, but it doesn’t crowd out the Christmas pictures.

Much has already been made of Branagh’s very sentimentalized recollections, the sometimes startling black-and-white cinematography of Haris Zambarloukos, and the irresistible charm of young Jude Hill, who is, after all, playing the director. But the only way “Belfast” makes sense, narratively or visually, is as a Buddy’s-eye view of the world and the past. This is not to say Branagh provides the boy’s literal point of view—Buddy is himself often framed against the backdrop of the pewter-toned city, home to his grandparents (a terrific duet by Ciarán Hinds and Judi Dench) and all the people he loves, including the little blonde girl at school whom he would like to woo, and is instructed in such by his Pop (Hinds).

But the way the past is constructed—often out of heroically static shots that might have leapt out of a comic book (or graphic novel) and the way a sequence of his parents dancing in the street carries as much imagistic weight as a riot—reflects a child’s memory: The streets are too clean, the people too pretty, and the events that might be historically important do not displace the things that are important to that child, such as a moment when his parents showed each other the love that was otherwise being subsumed by pressures political, financial and familial.

The way the past is constructed reflects a child’s memory: The streets are too clean, the people too pretty.

“Belfast” presents itself as a family photo album in many ways: Violence may intrude, but it doesn’t crowd out the Christmas pictures, or the movie-long debate among the family members (Lewis McKaskie is Will, Buddy’s older brother) about moving to England. Dad, a “joiner” (like Jesus, which is no accident) spends much time there anyway, working and worrying about his wife and kids, who are menaced by the likes of Billy Clanton (Colin Morgan), one of the militant gun-wielding Protestants cultivating brutality in the predominantly Catholic neighborhood where Buddy lives—and where his father knows he can only fight back for so long.

The point made may be overly obvious to an adult, but Gary Cooper makes an appearance in the western “High Noon,” with the voice of Tex Ritter’s pleading “Do Not Forsake Me, Oh My Darlin’.” It is significant, too, that the loathsome Billy is named after one of the desperados who died at the O.K. Corral. Branagh sees his family’s narrative as part western, part tribute to the lifelong impact made on an impressionable mind by movie myth and theatrical imagery. The only two scenes in which “Belfast” uses color (other than a brief intro and exit) involve the film musical “Chitty Chitty Bang Bang” (1968), which the family goes to see; and a staged version of “A Christmas Carol,” which Buddy attends with his grandmother.

One could fault Branagh, one supposes, for not painting a grimmer, more naturalistic portrait of his problematic birthplace, but his mission is not to recreate childhood as history, but rather as a highly selective source of one’s artistic inspiration. Given the director’s trajectory, one can see “Belfast” as a gesture of how art can conquer violence if you live through it. And how one’s personal past is a garden: One can pick flowers, or weeds. Branagh has gone for the bouquet.