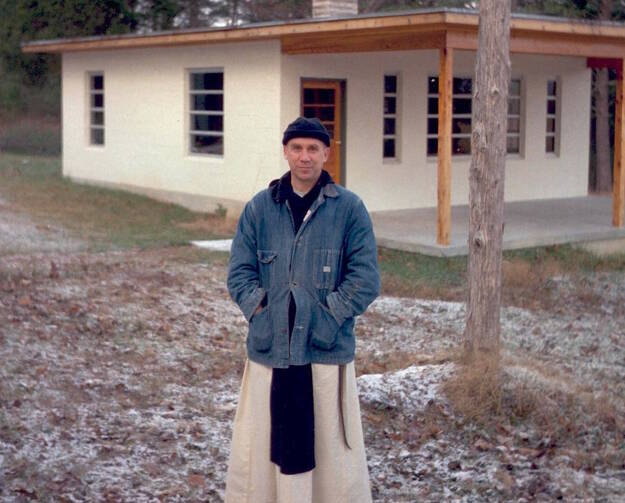 Trappist Father Thomas Merton, one of the most influential Catholic authors of the 20th century, is pictured in an undated photo. (CNS photo/Merton Legacy Trust and the Thomas Merton Center at Bellarmine University)

As Pope Francis declared in his address to the U.S. Congress in 2015, Thomas Merton was “above all a man of prayer, a thinker who challenged the certitudes of his time and opened new horizons for souls and for the church. He was also a man of dialogue, a promoter of peace between peoples and religions.”

Merton also had a homey and direct approach, like a folksy conquistador grappling with subjects like spirituality, liturgical renewal, church authority, ecumenism, the priesthood, interreligious dialogue and monastic renewal. These and other topics were most candidly addressed in Merton’s letters, where censorship from authorities at the Trappist Abbey of Our Lady of Gethsemani, near Bardstown, Ky. where he lived, was less of a decisive issue.

In A Focus on Truth: Thomas Merton's Uncensored Mind, Father Patrick Collins gives a close read of Merton’s correspondence. Father Collins, former director of campus ministry at The Catholic University of America and a choir director who studied choral conducting with the eminent Robert Shaw, focuses on Merton’s letters as being most indicative of his heart and mind. The result is an intricately polyphonic analysis of Merton in diverse moods, depending on the historical moment and subject matter.

A Focus on Truth offers an intricately polyphonic analysis of Merton in diverse moods, depending on the historical moment and subject matter.

At his best, Merton expresses a loving quest for understanding, as when he wrote to the poet Mark Van Doren in 1958: “I think the new Pope [John XXIII] is a wonder, a fine simple old man, who would not let anybody kiss his foot, and whose first thought was to go back to his native village and have a fine fiesta with his brothers and cousins.” Of Pope John’s posthumously published Journal of a Soul, Marton noted to another friend in 1965, “I think the importance of the book lies partly in the fact that it is the expression of a very traditional and in some ways almost hackneyed spirituality…In fact it shows, to the Catholic mind, that the Johannine renewal was not a revolutionary break with the past but a charismatic fulfillment of the living and timeless demands of the Gospel.”

The four Thomas Merton books you have to read
Jon M. Sweeney

Such loving observations are in distinct contrast to Merton’s complaints about warmongering, as when he opined to Dorothy Day in 1967 about the New York prelate Cardinal Francis Spellman’s support of the Vietnam War: “The moral insensitivity of those in authority, on certain points so utterly crucial for man and for the Church, has to be pointed out and if possible dispelled… [W]hat is a Church after all but a community in which truth is shared, not a monopoly that dispenses it from the top down. Light travels on a two-way street in our Church: or I hope it does.”

A Focus on Truth is an insightful and informed guide to such views, adding up to an intimate, endearing portrait of Merton.